The game was played this evening in TUS Gaelic Grounds, Limerick and it took extra time and penalties to separate them. 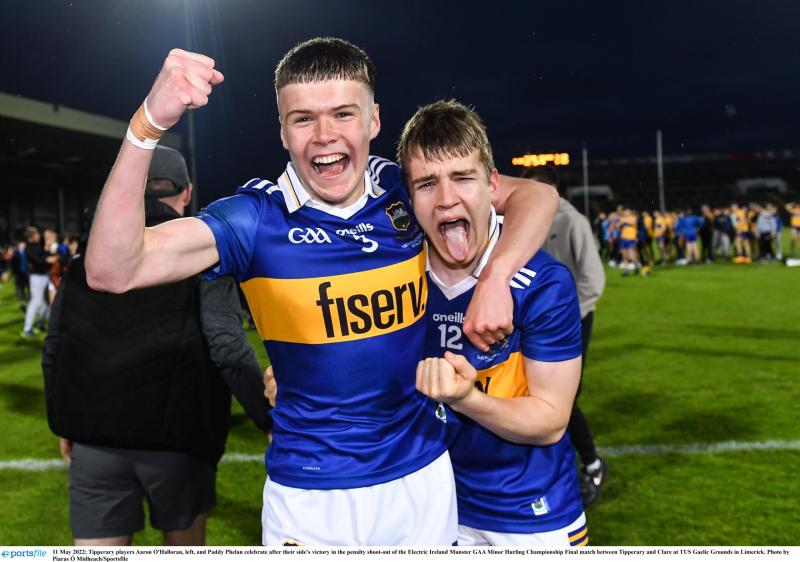 It took a penalty shoot-out to separate Tipperary and Clare's minor hurlers in the Munster final this evening at TUS Gaelic Grounds after an absorbing contest ended up level after extra time.

A tremendous contest which at times fell below standard, the two sides served up an enthralling clash which seemed to have been going in favour of both at different stages.

But, at the end of the penalty shoot out it was Tipperary who emerged having bagged three goals through Eoin Horgan, Paddy McCormack and Adam Daly, while Clare missed their three with Horgan saving two.

Tipperary held a slender one point lead at the interval and it was a great position to be in considering that they had played into the breeze blowing from the Ennis Road End.

The 0-10 ot 0-9 lead could have been much greater had it not been for Clare keeper Mark Sheedy who made a terrific double block in the 9th minute from Paddy McCormack and Conor Martin, and he was also on hand to race from his line and prevent another Tipp goal chance later on in the half too.

Four of Tipperary's three first scores came from the half back line with Sam O'Farrell (2) and Jack O'Callaghan showing the forwards how it is done. Damien Corbett had 0-4 for the side while Ciaran Foley had 0-2  and centre forward Joe Egan a point to give Tipp that slight advantage.

Clare had started very brightly and were 0-3 to 0-1 in front after seven minutes - Michael Collins, Cian Neylon and Oisin Whelan scoring for them. But, as Tipp rallied, the Clare lads gave away five in succession to fall three behind, before they then ralied with James Organ, Oisin Whelan and Jack O'Neill points.

The see-saw nature of the game continued with Tipp again going three up, only for Clare to fire Jack O'Neill, James Hegarty and Oisin Whelan points to tie it up again. But, Ciaran Foley gave Tipp the edge with his second point of the outing as they headed for the break.

Clare came out flying in the second half and they worked themselves into a four point lead by the 18th minute. Tipperary looked to be in big trouble and when they lost wing back Sam O'Farrell to a second yellow card and were reduced to fourteen, the task looked almost impossible.

However, the subs made a huge difference and a Sam Rowan goal in the 23rd minute tied up the game after Paddy McCormack and Joe Egan had helped them back into it.

Tipp hit the front through sub Darragh McCarthy, followed by one from another sub Cathal English and as the game entered the end of normal time  Tipp were one in front, 1-17 to 0-9, with four minutes of additional time to be played.

It was a pulsating finale to the game with the supporters on the edge of their seats and though Darragh McCarthy gave Tipp a two point cushion, Clare hit back with Oisin Whelan and a 35th minute leveller from Dylan Keane Hayes to force extra time.

They were still inseparable by the half way mark in extra time - Tipp, back to full compliment, hitting the front through Jamie Ormonde but Clare responded with a brace from James Organ and Oisin Whelan. Tipp were back on terms again though through a Darragh McCarthy free to leave it all to play for in the last half.

Clare went two up again through Oisin Whelan, but Tipp refused to die and despite missing a number of chances, it was left to ice cool Paddy McCormack to tie up the game and force penalties from which Tipperary prevailed after a long night of hurling.