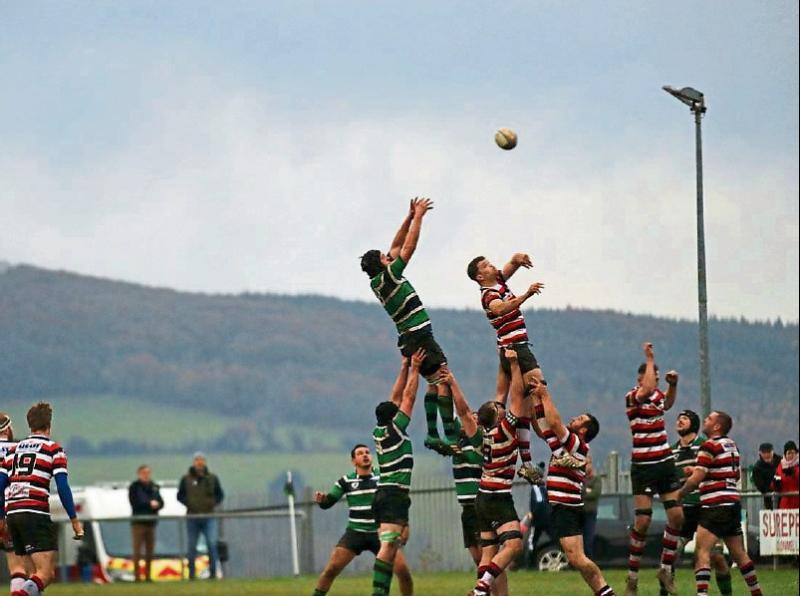 In a tough and thrilling local derby battle Cashel RFC just managed to edge out a win over Clonmel in the final minute of the Mansergh Cup semi final played under lights in Ardgeeha lase week.
Clonmel started well with two fine tries finishing the first half with a 10-0 lead. Cashel in the second half scored two converted tries taking over the lead at 10-12. Clonmel attacked again and came back with another try to go 15-12 ahead but in the final minute of the game Cashel scored another try and converted with the referee blowing up for full time at 15-19 to the visitors.
- Cashel now go forward to play Fethard in the final of the Mansergh Cup. Clonmel RFC wish both clubs the very best in the final
Mansergy Cup Clonmel 2nd XV:
1 Matty OToole, 2 Liam Ryan, 3 Conall Ryan, 4 Conor Forest (C), 5 Josh Dolan, 6 Eoin Breen, 7 Johnny Young, 8 Billy Coffey, 9 Joe Sheehan, 10 Dylan Cadogan, 11 David Leo, 12 Darren Slattery, 13 Emre Yasar, 14 Josh Fahey, 15 Dean Slattery, 16 Eoghan Anderson, 17 Gus Slattery, 18 Henry Buttimer, 19 James OMahoney

Gleeson Cup 2022 Final
Thurles 27 - 24 Clonmel
The last game of the rugby season for both clubs in unexpected sweltering sun conditions was always going to require over and above extra efforts by both sides for this midday kickoff final which delivered a cracking final from both clubs.
Thurles were first to get points on the scoreboard with a well worked try and conversion taking an early lead at 7-0. Clonmel fought back and rewards paid off with a try by Aidan Hickey and conversion by Dean Slattery to level matters on 07-07. Thurles took advantage of a penalty sticking it between the posts resulting in 10-07 up followed by a converted try a few minutes later leading at half time at 17-07.
In the second half. Clonmel gave away an early penalty which Thurles converted, 20-07. Clonmel quickly attacked from the restart and resulted in a well earned try by Ryan Phelan on his senior debut, 20-12. Thurles came back again getting over the whitewash for another converted try, 27-12. Clonmel hit back with a length of the field attack and were rewarded with a fine try by Darren Slattery and conversion by Dean Slattery to make it 27-19. Clonmel launched a quick attack again after the restart with another excellent try by another player making his Senior debut Rian McCormack, 27-24.
With only seconds to full time, Clonmel attacked again in which the ferocity and efforts from both sides did not deserve either team to lose, but Thurles gave away a penalty in front of the posts and three points from a kick would only end in a draw, so Clonmel went through some phases then sending the ball out wide to the left and somehow Thurles miraculously managed to defend Clonmels final attack phase.
The referees stopwatch was already well in the red at this point and blew for full time with the hosts after getting out of jail to just edge the win. The Clonmel hearts were broken after the huge come back efforts but massive congratulations to Thurles on retaining The Gleeson Cup for another season
A special mention for three players who made their senior player debuts; Ryan Phelan, Rian McCormack & Tim Nugent who contributed hugely to this final, Clonmel RFCs future is bright with these and more talent coming through the clubs underage system into the senior ranks.
Gleeson Cup Clonmel RFC XV:
1 Matty O’Toole, 2 Liam Ryan, 3 Mikey Lonergan, 4 Conor Forest (C), 5 Josh Dolan, 6 Brian O’Dea, 7 Conall Ryan, 8 Billy Coffey, 9 Aidan Hickey, 10 Dean Slattery, 11 Ryan Phelan, 12 Darren Slattery, 13 Niall Barrett, 14 Rian McCormack, 15 David Leo, 16 Cormac McNamara, 17 Tim Nugent, 18 Emre Yasar, 19 Shane Kophammel