Tipperary referee had a job to do with the jerseys - but no bother to Paddy Russell! 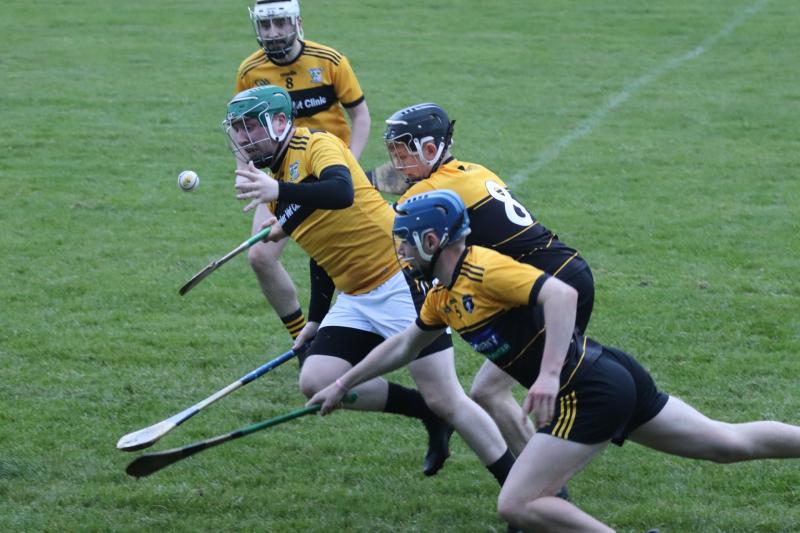 Knockavilla Donaskeigh Kickhams booked their place in the Maria Marron Palmers Hill Stud West Junior B Hurling League Final following a comfortable victory over Arravale Rovers in Bansha on Tuesday evening. Kickhams’ ability to get their scores more freely was key to their win. They finished 1-18 from play compared to 1-6 from their opponents while their inside forward line hit 1-11 between them as Kickhams booked their passage to the final.

Arravale had the perfect start in the third minute when Gavin Cussen raised a green flag. The Tipperary town side dominated the early exchanges as John Paul Lohan kept the scoreboard ticking over from placed balls. Orrin Jones got Kickhams off the mark in the sixth minute. Kickhams though were gradually coming more into the game and the threat of their inside forward line of Patrick Ryan, Orrin Jones and Johnny Ryan was becoming more apparent.

Patrick Ryan goaled in the thirteenth minute to tie the game but Arravale twice pulled clear with points from John Paul Lohan and Peter Ryan only for Conor Horgan and Orrin Jones to respond in kind. Orrin Jones eventually pointed Kickhams ahead for the first time with five minutes of the half to play and after that they were never led. Further points from Conor Horgan had Kickhams leading 1-11 to 1-7 at the break. Indeed, despite a slow start Kickhams could have been further ahead were it not for some good saves by Paddy O’Donnell in the Arravale goal.

The game went further away from Arravale in the second half as they struggled to take scoring chances. Kickhams though continued to add points from Johnny Ryan, Orrin Jones, Patrick Ryan and Conor Horgan as Arravale were limited to place ball scores from John Paul Lohan. At the three quarter stage, Kickhams led 1-16 to 1-8.

Again, Paddy O’Donnell was keeping the Arravale deficit down with some great saves.

Both sub benches made an impact on the scoreboard as the clock ran out and Kickhams advanced to a final meeting with Cappawhite.