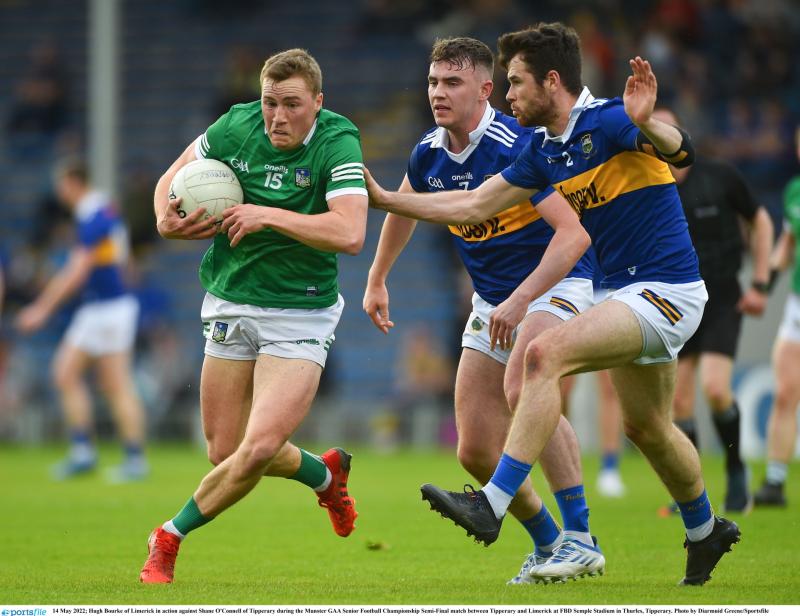 Action from the game in FBD Semple Stadium

There are thirty six floodlights on the roof of Ardan Ui Cuinneain at FBD Semple Stadium – I know, because I counted them.

There are also eleven giant steel pillars holding up the roof of the stand – again, I know because I counted them.

I counted them during the first half of this Munster senior football championship semi-final between Tipperary and Limerick. That tells its own story – this was a hard watch. Not so much watching paint dry, but more like watching paint lose its colour – a much slower and more painful process.

Part of the reason for the snooze-fest was the defensive approach taken by both sides. Cagey, patient, over and back the field, up and down the flanks, back again, cross over once more – it was dire stuff with little enough to excite the attendance. Football 2022. 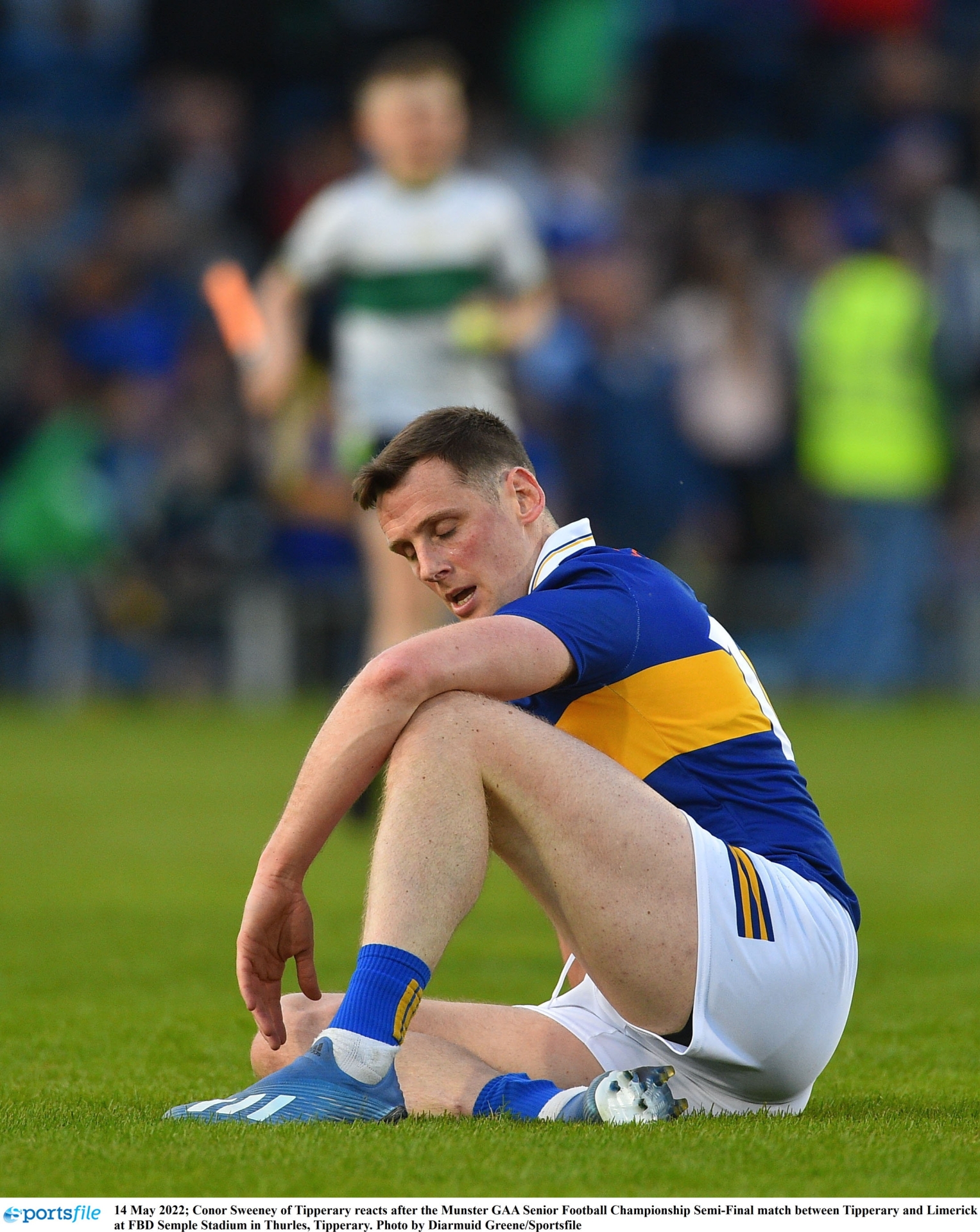 Down and out - Tipperary captain Conor Sweeney

Tipperary, for their part, failed to get to their own expected level of performance. They missed the influence of the forward bombing half backs in the mould of Robbie Kiely, Kevin Fahey and Bill Maher and eventhough Sean O’Connell contributed 0-2 from his number five berth, it tells its own story when you realise that he was Tipperary’s highest scorer from play. In fact, no Tipperary forward scored from play – sure how could you win a game with a stat like that?

Tipperary were in arrears after just 15 seconds and they would remain chasing this game for a sum total of 69 minutes. They were level for only five minutes of the match and even when on par for those two occasions and looked perhaps as if they might press on, Limerick's greater urgency saw them take on the initiative and press for the advantage again.

It should also be noted that Limerick kicked eleven wides in this game, to just two for Tipperary – had they been any bit more accurate, they would have had this game in the bag faster than JP McManus' helicopter would have passed over Dundrum.

For all the criticism about the performance and the kind of first half which unfolded, Tipperary did well to recover from a slow start – conceding that goal to Josh Ryan so early on was a big blow, but Tipperary did kick twice as many scores as Limerick for the rest of the half as they manufactured a 0-6 to 1-3 stalemate by the interval. Half of the Tipp scores had come from play - Jack Kennedy (2) and Sean O’Connor had placed balls, but the right flank of the defence was proving more dangerous in attack than the attackers with Sean O’Connell and Shane O’Connell both getting forward to point, as well as a great kick from the returned Mark Russell. 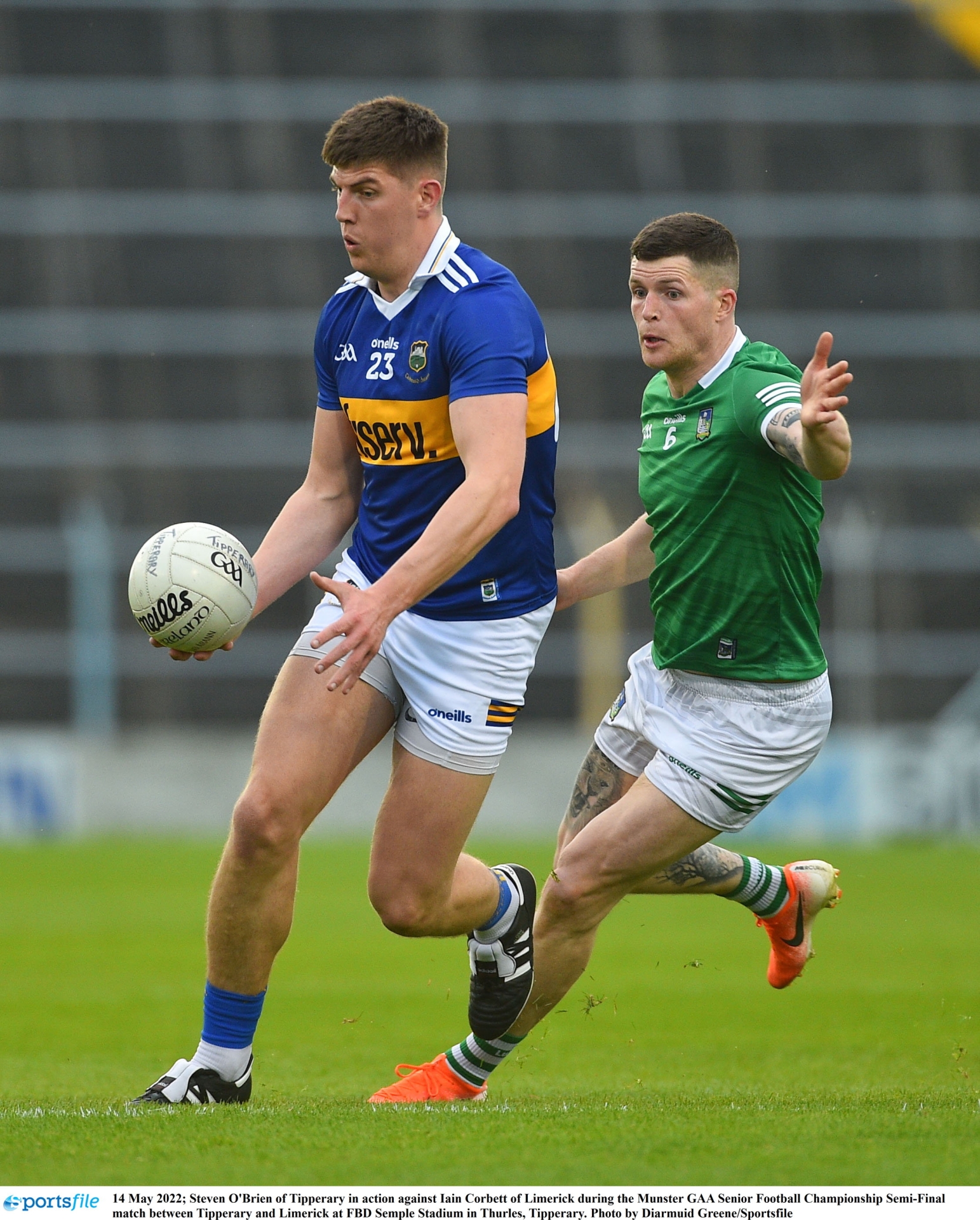 But, once Limerick regained the initiative after the break with three points to Tipperary's two, followed by that Brian Donovan goal, it was game over, despite there being fifteen minutes remaining. Tipperary were being over run – Limerick were creating chance after chance, but they were not taking them. Tipp were creating virtually nothing and when Sean O’Connell was black carded in the 34th minute, it just about summed up the outing.

Perhaps winning this game might not have served Tipperary best. Perhaps they are better off in the Tailteann Cup where they will be more competitive and up against teams of similar standard – the benefits of playing Kerry in the Munster Final and the other top sides in the next phase would have been hard to fathom.

Tipperary are building and it is a slow burn. It takes time to lay the foundations and build upon them – on the evidence of this showing Limerick are already up at second floor level having enjoyed a few very productive seasons, whereas Tipperary are still pouring the floors. The Tailteann Cup will allow for the laying of further blocks – the Munster championship and All-Ireland series could perhaps have seen a demolition of confidence.

Tipp are not yet ready for that next step and Saturday evening proved it. You cannot add the roof without having the walls built first.

So, it’s back to the plans for David Power and his management team. They will treat the Tailteann Cup as they would any other championship tie and hopefully a greater sense of urgency will emerge when they line out on the same weekend as the Munster Final.

Yes, they would have loved to have been playing in that Munster Final, but perhaps playing on Munster Final day in another venue, against opposition other than Kerry, is a better fit for the Premier lads right now.