Reunion for Ardfinnan football team that conquered Tipperary 51 years ago

Enjoyable night of celebration and nostalgia 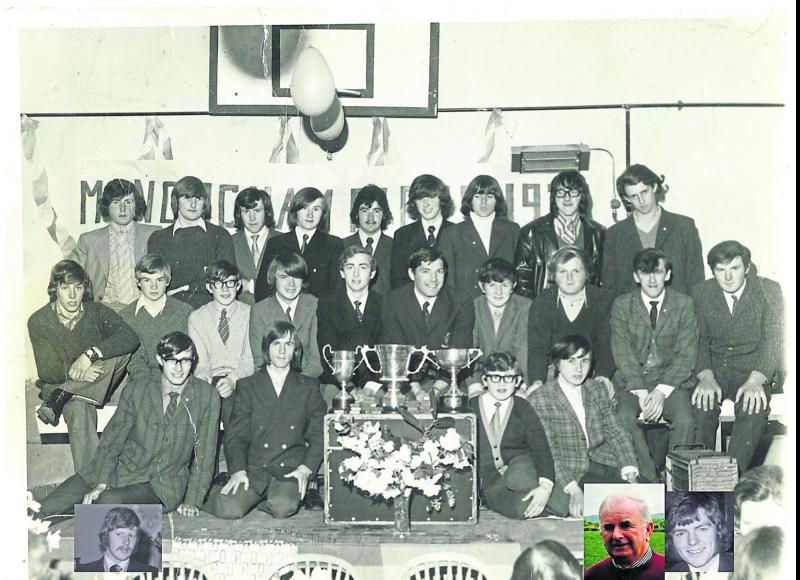 It was a night of celebration and nostalgia when the successful Ardfinnan minor footballers of 1971, who won the south and county minor football championships got together in Cahir House Hotel recently, when old friendships were rekindled and past memories of their days playing in the maroon of Ardfinnan were recalled.

The night was organised by the players themselves, spearheaded by Aidan O’Mahoney, Thomas O’Dwyer and Fran O’Leary. The attendance included the panel of 1971, selectors and their partners and also club chairman Diarmuid Boyle and secretary Aidan McNamara.
The evening began with a beautiful meal, with everyone receiving a well-presented souvenir brochure that carried photographs and detailed reports of the five games that brought victory.

The first speaker, club chairman Diarmuid Boyle stated he was honoured to be present and was attending his first function since being elected chairman.
He congratulated the players and selectors on their achievement, reminding everyone that the club  had only won four county minor football titles in its history and that was number three, with the most recent in 2009. He said he hoped success would come the club’s way during his term as chairman and wished everyone well.
The next speaker was Aidan O’Mahoney, captain of the team.
In what can only be described as an eloquent and detailed address, Aidan thanked everyone who helped make the night possible and also for their attendance. He stated how his love of football began, remembering the late Patsy Myles who died recently, and how much an influence he was on his career, collecting him and bringing him to games and instilling in him the great honour of playing for your club.

Aidan also outlined the games played, reminding everyone that it was a straight knockout championship. He also recalled the county final of 1971 played in Tipperary town as a curtain raiser to Tipperary/Kerry in the National Football League. He recalled that after the game when they returned to the dressing rooms, Dinny Burke, Fethard, had forgotten his boots and borrowed a pair from Pakie Ryan, who had scored two goals in the minor final.

The presentations then took place, with the late Philip O’Brien’s being accepted by his son Philip, whose family had travelled from Kildare, while the late Cyril Lambert’s was accepted by his granddaughter Ruby, and the late Richie Boyle’s (selector) was accepted by his son Leslie. Unavoidably absent were Michael White, who played centre back and corner forward Billy Quinn. John Cunningham, one of two brothers on the team, travelled from Mayo for the event.
The final speaker was Pete Savage, selector, who won five county medals with the club and who held almost every position at club and county level.
Pete paid tribute to the three people who had passed to their eternal reward, remembering Cyril Lambert, who had left football early and Philip O’Brien, who was one of the club’s greatest losses when he emigrated.

He also remembered Richie Boyle, who had won two county senior medals with the club in 1970 and 74 and had served the club well and it was fitting that his son Diarmuid was now chairman, while Leslie is a former chairman. He said it was an honour to be involved with this group of players.
There is little doubt everyone present enjoyed the night, which was a fitting tribute to the Ardfinnan minor team of 1971.