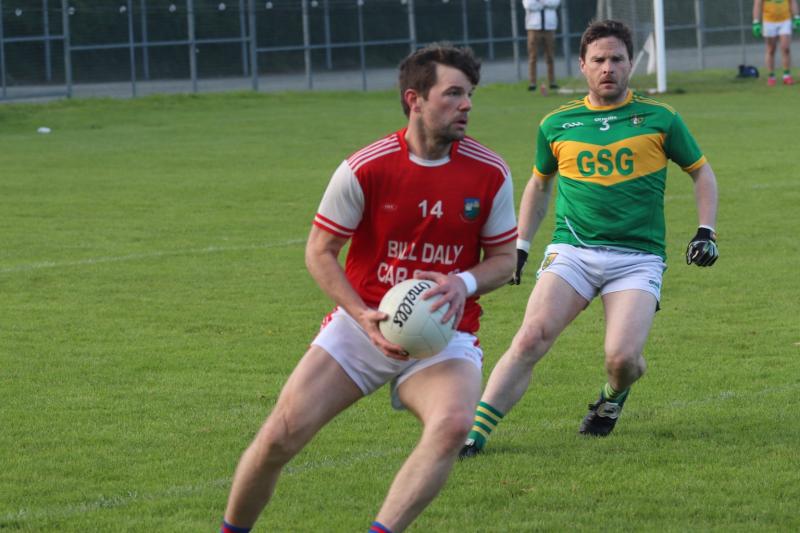 Galtee Rovers booked their place in the 2022 Michael Devlin Solicitors O’Donoghue Cup Final on Thursday night last in Lattin when accounting for neighbours Aherlow in a hard-fought contest.
Stephen O’Dwyer’s penalty goal in the 12th minute for Galtee Rovers was the difference for most of the game, but with ten minutes to go Aherlow got themselves back in contention when Ben Carey raised a green flag at the dressing room end. It led to a tense finish, when a late Tony Egan free eventually sealed the issue for Galtees.
Barry Grogan got the scoreboard moving when he pointed Aherlow ahead in the fourth minute. It was three minutes later before Eoin Halpin opened his and Galtee Rovers’ account.
The Galtee Rovers full forward line of Eamon Quirke, Shane Egan and Eoin Halpin always looked a threat when in possession. Eamon Quirke followed with a point before Galtee Rovers got a massive boost in the twelfth minute when they were awarded a penalty after Shane Egan was brought down. Stephen O’Dwyer stepped up and duly obliged with a goal.
When Eoin Halpin pointed two minutes later to put Galtees five up it would be their last score of the half, though they could have added to their tally in this time. Aherlow did come more into the game but found the Galtee Rovers defence hard to break down.
Barry Grogan got past the rearguard in the 22nd minute but his shot for goal was well saved by Denis Peters. Grogan finished with a pointed free to see Galtee Rovers ahead by 1-3 to 0-2 at half-time.
The second half saw scores and chances hard to come by, with both sides cancelling each other out. Barry Grogan pointed two frees while Stephen O’Dwyer replied with one at the other end.
The game seemed to be heading the way of Galtee Rovers but that changed with ten to play. Ben Carey found himself one on one with the Galtee Rovers goalkeeper Calum Fanning after the defender had been dispossessed, making no mistake in rattling the net.
It was a huge boost to Aherlow, who a minute earlier had seen Darren Neville’s effort for goal come back off the post. The difference in the closing minutes was Galtee Rovers taking their chances while Aherlow saw efforts from placed balls go the wrong side of the post. Tony Egan kicked the winning free to see Galtee Rovers advance to a final meeting with Arravale Rovers.