Tremendous greyhound has been a big attraction in Clonmel 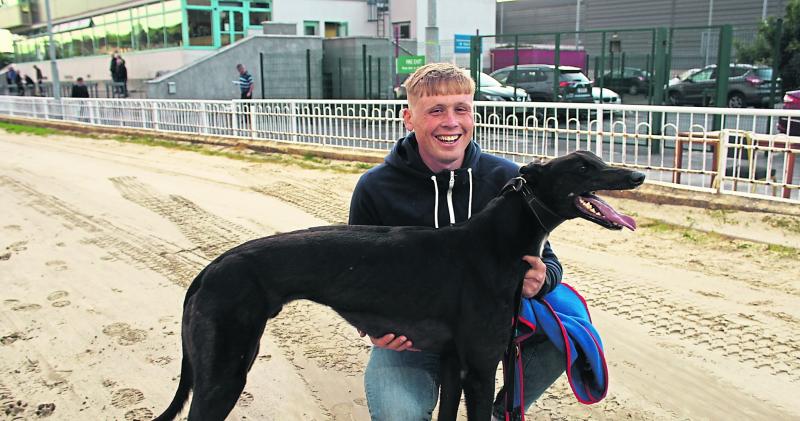 A feast of racing is expected at Clonmel Greyhound Stadium this Sunday night with The Larry O’Rourke National Produce Stake Final the highlight of the night.
After two thrilling semi-finals last Saturday night, which saw the favourite Swords Rex give yet again a blistering performance, breaking the 28 second barrier for the second time, the trap draw really favours him to land the outright prize.
Trained by Graham Holland from Golden for Barbara Lowndes from Swords, he is a tremendous greyhound and as one of this year’s talking dogs it is a treat to watch poetry in motion.
The second of the Holland runners, Newinn Homer, is running from trap two in the final, after his dominating semi-final run with Sunshine Dream, owned by Abbeydorney’s Brid Munsell.
The Pat Buckley-trained Gaston Pecas, owned by Javier Jarne, wears the red sheet in the final, with his finishing kick his biggest strength.
Local dog Serene Tiger, trained by Michael O’Donovan for Eddie Ryan, runs from five and like the dog on his outside, Radical Hero, is a back-to-back winners who will be coming home strong.
Thomas O’Donovan manages the outside runner for Gerry Hutton and although it’s not his ideal trap he is a dog that can be hard caught if gets in front.
Swords Rex is bred in Cashel by Michael “Gilly” Ryan, and all eyes will be on him to add to his fantastic trophy collection already this year.
Also on the night there will be ten other finals, notably The Greyhound Supplies Unraced, where Bernadette Connolly’s Carefree King will top the bill with the Rachel Wheeler trained for Kevin Drinan Move Over Cha a big danger.
In the final of The Kieran Purcell Memorial Guys and Dolls, local owner Nigel Quinn will be looking for Bloodsweatnbeers, managed by Ardfinnan’s John Browne, to lift the trophy. His real danger will be back-to-back winner Courty Girl, trained by John Byrne, who but for a slight blip in the semi-final was the eye catcher throughout this event.
The 550 Stake, sponsored by The Extreme Greyhound Products, sees the Rachel Wheler-trained Annagh Bailey face up to Portlaw’s Jimmy Power’s Classic Chick. This should be a fantastic race, with Shari-Anne O’Donnell’s Newinn Extra not to be ruled out either.
In The Track Bookmakers 575 Final the Simon Taylor- owned Cryptopunk, in the hands of Graham Holland, will be the one to catch after his very impressive run despite stepping up in trip. His kennel mate Kameko, owned by Larry O’Rourke, may test the favourite early on and could cause an upse,t with New Inn owners Andrew Moloney and Tom Hennessy hoping for a good run from Future Tune.
The Run Happy 550 Stake will be a cracker, with two incredibly determined ladies, both semi-final winners, ready to do battle for honours. Emers Bonnie, owned by JJ Dunne, impressively took the opening semi-final while Fastnet Cai, owned by Aaron O’Hanlon, matched her performance.
In the Slaneyside Greyhound Supplies Stake Carrick-on-Suir’s Desna Hattemore’s Heathview Frankie showed tremendous finishing and can go all the way in the final, although the Adam Dunford-trained Shancol James may have a say.
Sunday night’s card will be a feast for greyhound supporters and in excellent surroundings, which will have full dining facilities in two areas of the stadium to complement excellent racing and a real enjoyable night’s entertainment.