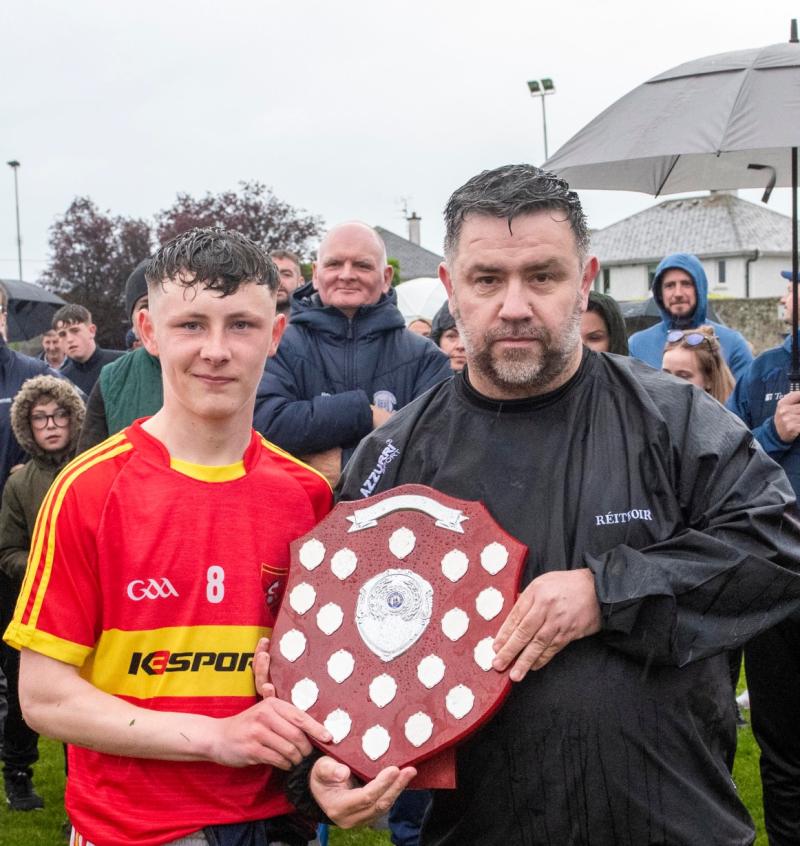 On a wet evening in Fethard this Killenaule team deservedly came out victorious in this highly contested South Final.
Although conditions on the night were slippy from the the earlier rain the Fethard pitch was in super condition for this contest.
Killenaule got out of the blocks early and settled into a rhythm of impressive scores.
A Charlie Barrett free on three minutes was quickly followed by points from play by Igor Miguel and midfielder Owen O’Dwyer in the sixth and eighth minutes respectively
The Killenaule midfield and half back line were dominant at this stage and the Gaels were struggling to get any foothold on proceedings.
The quick ball and movement of the Killenaule forwards was yielding them success and soon they added to their score tally.
Two quick points by their fleet footed corner forward Brandon Treacy had Killenaule five up after 11 minutes and coasting. Another Charlie Barrett free made it 0-6 to 0-0.
From one of the Gaels first attacks a driving run from the heart of defence by Jack Owens resulted in the Gaels centre back getting his side on the score board for the first time.
Darragh O’Gorman finished a great Killenaule move moments later with a point and when Brandon Treacy kicked his third point on the night and Killenaule’s eighth Knockmealdown Gaels looked in real trouble with only 20 minutes of the game gone.
However to the Gaels credit they then produced their best football on the night from then until the end of the half.
Anchored in defence by Jack Owens the momentum of the game changed. 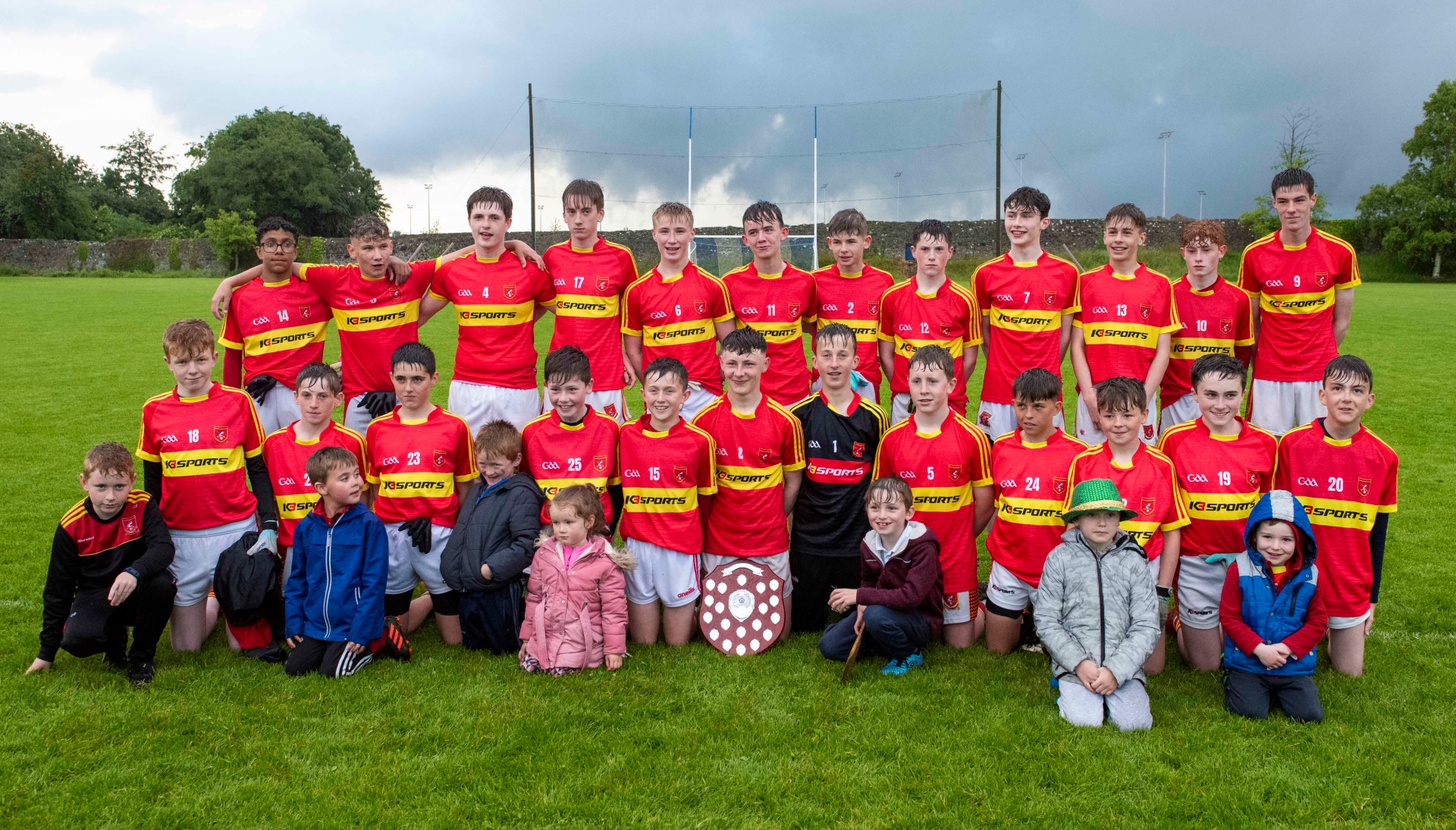 The Killenaule football team and supporters celebrating with the South Under 15B Bord na nOg trophy after they defeated Knockmealdown Gaels in the final played at Fethard recently. Pic: Michael Boland

Daire English and Ryan Bready began to dominate in the middle of the park.
After great defensive block by Killenaule full back David Lahart the ball fell perfectly to Killian Tobin who didn’t need any time and calmly buried the ball in the corner of the Killenaule net.
This was quickly followed by a free from Gaels Dan Burke and the lively wing forward quickly followed up with one from play.
Before the half finished another super effort by Gaels wing back Killian Tobin left the bare minimum between the sides at the break 0-8-1-4.
The second half in many ways mirrored the first with Killenaule again to the fore early on, another pointed free by Charlie Barrett in the 32nd minute was preceded by a well kicked point by the towering Killenaule no 9 Owen O’ Dwyer.
Leigh Murphy responded with a well kicked point for the Gaels on 35 minutes.
With the Gaels on all out attack Killenaule broke and moved the ball quickly up field and a well worked through ball to Centre Forward Charlie Barrett left him the opportunity of a goal which he didn’t relinquish and finished cooly to the net.
Killenaule were now in the driving seat and even though a Daire English pointed free on 40 minutes cut the margin to 4 points, Killenaule were to get the next 4 points.
Darragh O Gorman got his second of the night on 42 minutes and then both Tony and Shane Ryan got in on the act shortly afterwards.
When Charlie Barrett kicked his 4th free of the night for Killenaule the margin was out to 8.
To Gaels credit they didn’t surrender, another surging run by Owens resulted in second point of the night.
When Killenaule midfielder Shane Ryan closed out their scoring soon after the roar from their supporters could be heard in Ballinure.
The Gaels rallied again and after a quick free by Dan Burke, Gaels man of the match Jack Owens found the back of the Killenaule net.
Leigh Murphy quickly followed with another Gaels point but it was to be Killenaules night and they had heroes all over the field from Lahart, Shelly and Doyle in defence, to midfield pairing of Shane Ryan and Owen O Dwyer.
Up front credit must go to Barrett, O’Gorman and corner forward Brandon Treacy.
For the Gaels Shane O’Brien and Killian Tobin were solid in defence while Jack Owens at centre back was a colossus all through the game, Ryan Bready and Daire English had their moments in the middle of the field.
In the forward line Dan Burke, Leigh Murphy and Josh Davey were best on the night.
Killenaule: Owen Fanning, Andy Williams, David Lahart, Michael Kelly, Rory Shelly, Darragh Doyle, Bill Smyth, Shane Ryan 0-2, Owen O’Dwyer 0-2, Darragh O’Gorman 0-2, Charlie Barrett 1-4 (0-4f), Tony Ryan 0-1, Cathal Lawrence, Igir Miguel 0-1, Brandon Treacy 0-3, Jack Doherty, Liam Maher, Tadgh O’Loughlin, Fionn O’Keeffe, Pat Ryan Jnr, Ben Browne, Danny Cashin, Andrew Munro, Sean O’Gorman.
Knockmealdown Gaels: Donncha Reidy, Conor English, Shane O Brien, John Burke, Sean O Sullivan, Jack Owens 1-02, Killian Tobin 1-01, Ryan Bready, Daire English 0-01f, Jack Sullivan, Luke Morrissey, Daniel Burke 0-02 (1f), Padraig Hickey, Leigh Murphy 0-02, Joshua Davey, Fionn Leonard, Patrick Hennessy, Adam Sullivan, James Bateman, Cian McHugh, Mossie Tobin.