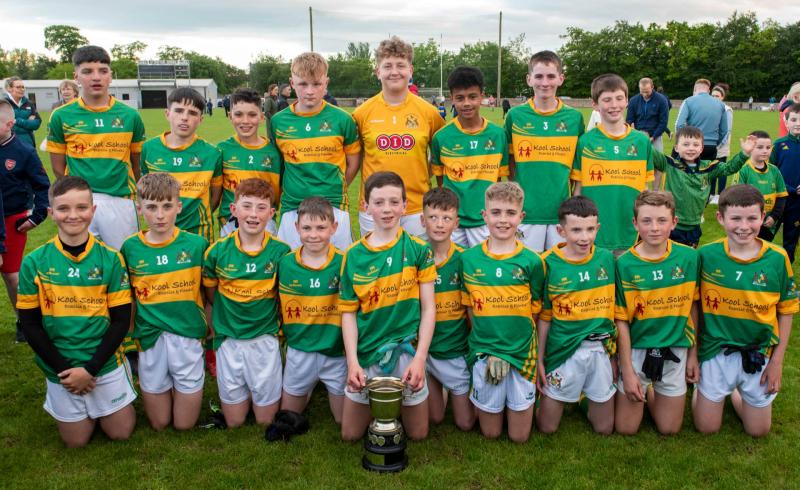 The Clonmel Commercials team who captured the Bord na nÓg County Under 13A Football Championship with victory over Newport in the final played at Dundrum.

Dundrum was the venue for the recent County Under 13 A Football Championship final, with victory going to Clonmel Commercials over a gallant Newport side.
Commercials came through a South campaign unbeaten with a good win over a strong Moyle Rovers side in the final and then overcame a really good JK Brackens team in the County semi-final.
The Clonmel boys then faced Newport in the County final.
A large and vocal crowd was in attendance and added to the atmosphere. Commercials won the throw-in through Dara Beckett and were camped in the Newport half for the first few minutes. However the closest they came to a score was when the Newport ‘keeper pushed a Dylan Condon shot for goal off the crossbar.
Newport then took the upper hand and rattled off two points in quick succession. Commercials again took control of the ball but were missing chances against the breeze and seemed unsettled.
Ben Fuller finally got their first score from a free after 10 minutes and this seemed to relax the Commercials lads, who started to play some of their best football.
Enda Condon kicked their first point from play and then a good move on the right wing involving Billy Cooney, Donal O’Callaghan and Leon Kelly ended with centre forward Rory Dunphy picking his spot in the top corner for a goal for Commercials.
Newport had threatened a goal themselves before half- time when giant midfielder Oisin Kennedy fired over the bar. The half time score was Clonmel Commercials 1-3 Newport 0-3.
Commercials set the tone again by winning the throw-in at the start of the second half and had their most productive period of the match in the next 15 minutes. Points from play from Ben Fuller and Rory Dunphy were followed by a great goal from Jayden Waters, who managed to lob the Newport ‘keeper with a great finish. This was followed with points by Dylan Condon, Donal O’Callaghan and Ben Fuller.
Newport had not given up and their perseverance was rewarded with a good goal with a few minutes remaining.
To finally seal the game, a long ball from Enda Condon ended in a race between Peter O’Brien and the Newport goalkeeper. Peter won the race before calmly sidestepping the goalie and finishing to the net.
The referee blew the final whistle a few minutes later with a final score of Commercials 3-12 Newport 1-7.
Captain Donal O’Callaghan accepted the cup on behalf of his team mates and had obviously worked on his speech since the south final!
While Commercials’ forward line will get the plaudits, the goalkeeper Nathan Gucwa and defenders Freddie Baker, Cian Mahadevaiah, Shay Scully and Rory Hennessy had to be at their best to keep Newport out.
Commercials also used four subs who all had to play their part.
Commercials Squad: Nathan Gucwa, Cian Mahadevaiah, Freddie Baker, Rory Hennessy, Dara Beckett, Shay Scully, Enda Condon, Donal O’Callaghan, Billy Cooney, Rory Dunphy, Ben Fuller, Leon Kelly, Dylan Condon, Jayden Waters, Ben Tierney, Peter O’Brien, Darragh Prendergast.