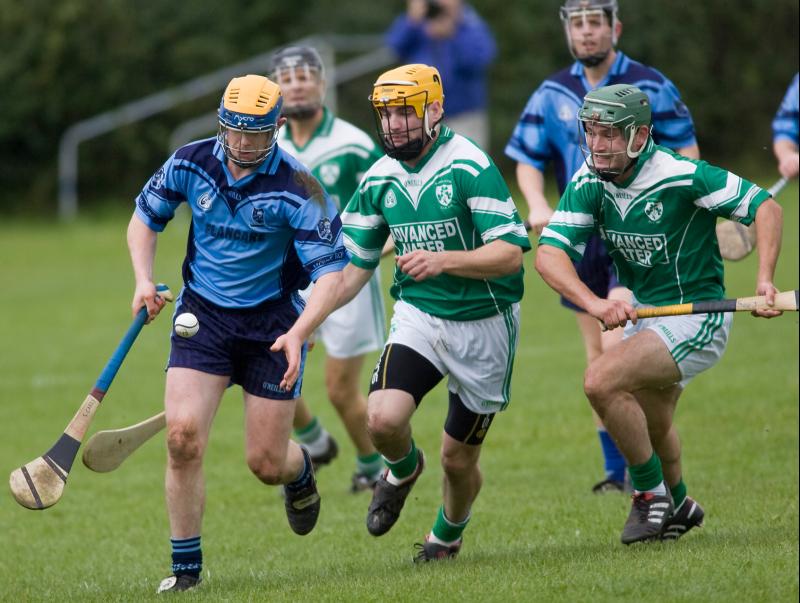 File Photo: Borrisokane's Philip Austin (centre) scored a vital goal in his side's victory over Moyle Rovers at The Ragg on Sunday afternoon.

In a closely contested and thoroughly entertaining County Hurling League Division 4 final played at The Ragg on Sunday afternoon, Borrisokane came out on top by the narrowest of margins, 2-17 to 2-16.

Level on no less than 10 occasions over the hour, and still level in the 60th minute, a blitz of four points in time added-on took Borrisokane clear, and while the Rovers did manage a goal at the death, there was to be no denying the boys in green.

After the northern representatives opened the scoring inside a minute with an Oisin Larkin free, Moyle Rovers were soon 1-2 to 0-1 up. Two fine points by former county minor captain Stephen Quirke preceded a fifth minute goal scored by lively forward Dara Ryan after an effort by Craig Condon was parried by Colm Larkin in the Borrisokane goal.

Almost immediately Borris hit back with a goal of their own from a penalty by Oisin Larkin. Moyle Rovers should have cleared from defence but pressure from Jack Larkin turned them over and when Philip Austin was fouled, Joe Leahy awarded the penalty. Jack Larkin gave Luke Delahunty no chance with the one-on-one.

A Dara Ryan free for the Monroe side made it 1-3 to 1-1, but two quick points from Gary Ryan from half-way and Jack Larkin after a short puck-out was lost, had the sides all square on 12 minutes.

A superb Kevin Grace long range point for the Rovers was matched by an equally impressive effort from Oisin Larkin after 14 minutes to restore parity for the third time. But in a fast-scoring encounter Shane Ryan had the south Tipp side ahead again with a point from almost half-way line.

If Philip Austin had been denied the benefit of advantage play when his ‘goal’ was disallowed in the seventh minute, he wasn’t to be denied on the quarter hour mark. Good play from Conor Ryan provided the pass and the former county football stalwart made it 2-4 to 1-5 when finishing with aplomb.

The next three points were all for the Rovers, availing of the wind at their backs, a Darragh Ryan free won by Dean English, was followed by white flags from Daire Lutrell and a rousing effort from Shane Lonergan from inside his own half.

Borrisokane then tried for a third goal before half-time when Oisin Larkin’s close-in free was passed to Jack Larkin but that effort blazed just over the crossbar to make it 2-5 to 1-8 on 23 minutes.

Two placed balls from the skilful Dara Ryan, a 65 and a free from a very tight angle, edged the Powerstown/Lisronagh parishioners two up before Gary Ryan had the last score of the first half for Seamie Gleeson’s side. At the break, despite the advantage of the breeze, Moyle Rovers were just the one ahead, 1-10 to 2-6.

Tit-for-tat it continued with the first four points of the second half; a Dara Ryan (free) and another fine point for Kevin Grace for Rovers nullified by Oisin Larkin and Conor Ryan efforts for the northerners.

A long range point from Seoady Cleary for Borrisokane in the 40th minute levelled matters for the sixth time before the ever-accurate Oisin Larkin’s 42nd minute free edged his side ahead once again.

The game’s top scorers, Dara Ryan and Oisin Larkin, then swapped frees before Rovers’ Conor Ryan with an excellent point made it 2-11 to 1-14, the wing forward finishing off a superb solo run with a sweet point.

The John McGrath managed Moyle Rovers got their noses in front once more when Cathal McKeown pointed in the 53rd minute but quickly Oisin Larkin punished the opposition with another equalising white flag.

Four minutes from the end of normal time Rovers edged ahead for their last time when Dean English raised a white flag but an excellent point on the run from Borrisokane wing-back Liam Cleary levelled the sides for the 10th time in the 60th minute.

In a four minute added-time blitz Borrisokane were to put their gallant opponents to the sword. Oisin Larkin, Liam Dooley, Gary Ryan and Conor Ryan all found the target to wrestle the cup from the grasp of Moyle Rovers. In that period Rovers were desperately unlucky when a low effort by Dean English whizzed across the Borrisokane goal to go wide.

Rovers did have the last score of the game, a goal from Dean English in the 65th minute, to make it a one-point game, but any hopes of forcing extra-time were blasted away by referee Joe Leahy.

This county final was a fitting climax to a good campaign for both sides who will be hoping to carry that form into the championship now.

For the winners there were fine displays from captain Brian Davis at full-back, the half-back line of Liam Cleary, Roan Murphy and Liam Dooney, but it was the ability of the forward division to take their scores, especially Oisin Larkin with 1-7 over the hour that got them home in the end, but Conor Ryan, Gary Ryan and Jack Larkin all chipped in when needed with vital scores.

Moyle Rovers will be disappointed no doubt, and will feel that they left it behind them. Some bad shooting in the first half came back to haunt them, and a few scores were gifted with a breakdown in the short puckouts. Overall though they can be happy with a run that saw them record wins over Ballingarry, Ballybacon/Grange, Arravale Rovers, Carrick Davins and Boherlahan/Dualla.

On the day they were led in defence superbly by captain Morgan Irwin at centre-back supported by Shane Ryan, Jack Holohan and Shane Luttrell. Cathal McKeown and Kevin Grace held their own around the centre, while Dara Ryan, Shane Lonergan and Daire Luttrell all had some fine moments over the hour.