Wins for Upperchurch Drombane, Drom-Inch and Moycarkey Borris this evening in the Centenary Agri MSHC 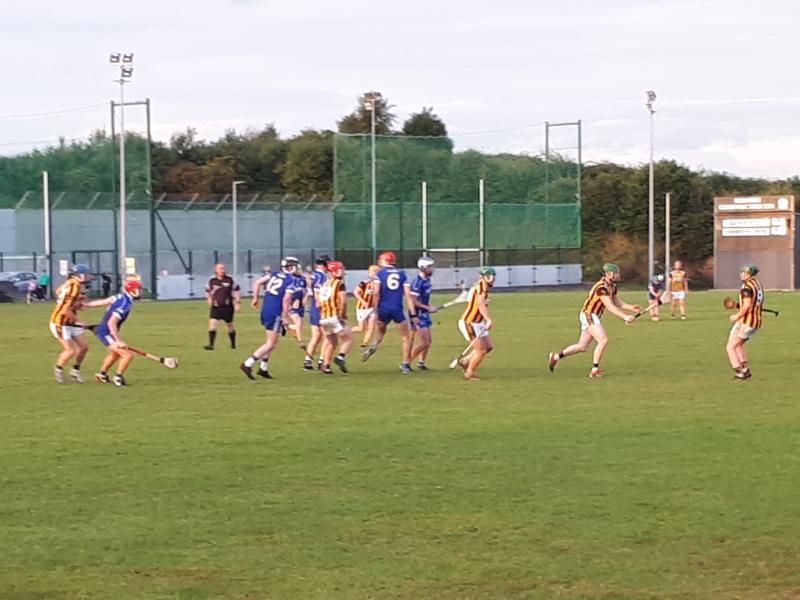 County champions Loughmore Castleiney and divisional title holders Thurles Sarsfields were both dumped out of the Centenary Agri Mid Tipperary senior hurling championship this evening as they fell to Drom-Inch and Upperchurch Drombane respectively.

The mid championship has been blown open by the evening of hurling which also saw Moycarkey Borris defeat Holycross Ballycahill in a hard hitting encounter at Boherlahan. It now means that the three winners join JK Brackens in the semi-finals to be played next weekend.

Two goals in two minutes for Drom-Inch from an Eoin Collins penalty and David Butler, four and six minutes from time, sealed a 2-20 to 1-16 victory over Loughmore Castleiney, despite Liam McGrath hitting 1-12. Loughmore Castleiney were without John McGrath (injured) and Noel McGrath (suspended) as well as the two Connolly's, Ciaran and Ed,leaving them short key men. But they still battled very gamely and were 0-11 to 0-6 in arrears at the half way mark. Liam McGrath's goal  four minutes into the second half and a point from him tied up the game, before Seamus Callanan who bagged 0-7 on the day, restored Drom-Inch's lead.

The Drom-Inch lads slowly edged their way in front at Templetuohy before the two goal blast helped to see them over the line for a big win for them.

Moycarkey Borris also rallied late to win their tie at Boherlahan against neighbours Holycross Ballycahill. Though they played with a very strong breeze in the first half, the Moycarkey Borris lead stood at 0-12 to 0-7 and one wondered if it would be enough. It didn't look like it when a Joe Caesar goal  for Holycross Ballycahill very early in the second half cut the deficit, but Moycarkey Borris went downfield and immediately replied with a goal of their own through Kieran Cummins to restore a six point advantage.

Holycross Ballycahill fought back and were level with a bizarre goal in the 19th minute. Moycarkey Borris keeper Rhys Shelley came upfield to take a free which drifted wide. And, his opposite number, Ewan Bourke, launched a massive puckout right into the net at the other end before Shelley could get back - the ball took a touch as Aidan Stakelum and Tom Ryan contested the delivery on the edge of the square and ended up in the empty net.

The goal didn't upset Moycarkey Borris though - they reeled off three points through Kieran Morris who hit 0-11 on the day, and sub Jack Fallon, before Morris struck two more to secure a deserved win for his side. A very competitive encounter between neighbours, it threatened to get out of hand at times and a few players were fortunate to stay on the field as referee Joe Leahy battled to maintain control.

Upperchurch Drombane  came from behind to defeat Thurles Sarsfields in the opening game of the championship at Templemore for a famous victory for the Church. A Gavin Ryan point deep into injury time sealed the  1-19 to 0-21 win in what was an exciting game of hurling.

Sarsfields led by 0-11 to 0-8 at half time, but there was little between them all the way through. Sarsfields always seemed to have their noses in front with points from Seanie Butler, Stephen Cahill and Aidan McCormack keeping their advantage against Paudie Greene and Jack Butler scores.

However, a goal from Luke Shanahan in the 18th minute of the second half  tied up the game and Upperchuch Drombane went in front with a Paudie Greene free, only to see Paddy Creedon tie up the match again. A grandstand finish was on the cards and though Sarsfields edged ahead through Aidan McCormack (2), Upperchurch Drombane hit the last three scores of the game through Paudie Greene and Sean Ryan, and then that Gavin Ryan free to win the match.

It was a great and famous win for Upperchurch Drombane, and Sarsfields, Loughmore Castleiney and Holycross Ballycahill must now depend on the county championship round robin if they wish to progress to the closing stages of the Dan Breen Cup.