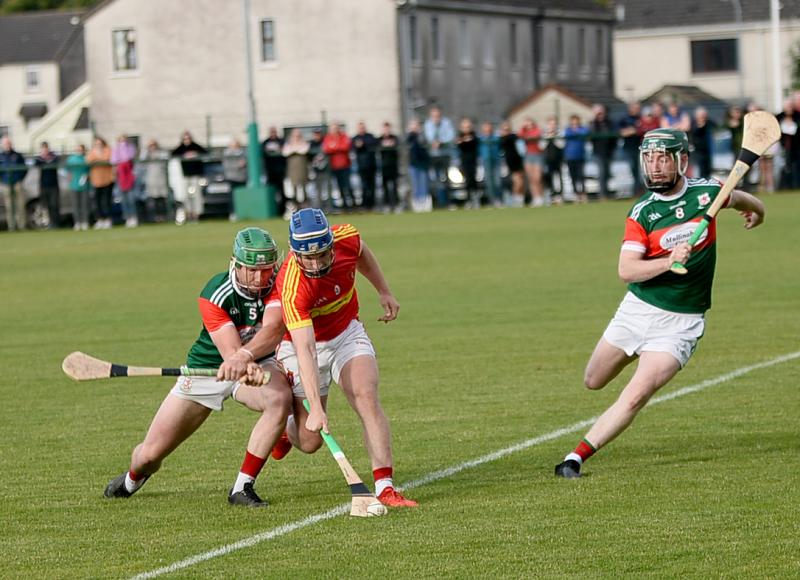 Mullinahone are through to next Sunday’s South Tipperary Senior Hurling Championship final having dethroned holders Killenaule in an entertaining encounter at Páirc na nÉalaí, Carrick-on-Suir this evening (Saturday).

Level at 1-15 apiece with four minutes left to hurl and extra-time looking highly possible, it took a goal from Mullinahone centre-forward Mikey O’Shea to swing it the Kickhams way. The goal came after pressure on the Killenaule defence forced a turnover and Mikey O’Shea gathered the dropped sliotar, raced through and rattled the net. Having already come from five down early in the second half to force parity, there wasn’t to be time for another revival from ‘The Robins.’

But up to that green flag Killenaule had begun to look the more likely winners having pulled themselves back into the game through the excellence of John O’Dwyer who scored 12 points, including eight placed balls, out of their 1-15 total. In a 12-minute period in the second half Kenneth Browne’s side outscored Mullinahone 0-4 to 0-0 including two excellent efforts from play from ‘Bubbles’ and the momentum was with them.

But then, from their perspective, disaster struck and county senior football player Mikey O’Shea wounded them mortally with his half-opportunistic goal.

The second half was to be a step up in intensity from the first half in which the sides had collectively hit 18 wides over 30 minutes, Mullinahone going to the break leading by the minimum at 0-10 to 0-9.

Twenty-four seconds into the second half the Killenaule net was bulging after Eoin O’Dwyer’s fine strike which came following a perfect hand-pass from Enda Keane. While Dara Fitzgerald replied immediately with a point at the other end of the field, two pointed frees from Eoin Kelly had Mullinahone 1-12 to 0-10 four minutes after the restart.

But Killenaule weren’t going to give up their crown without a fight and in the 35th minute Tom Stakelum scored a superb goal when cutting in at an angle from the sideline to give Alan Walsh no chance in the Mullinahone goal.

A huge free from his own 65 from Bubbles made it a one-point game but almost immediately Jack Shelly doubled the CJK advantage to two  when making the best of Kevin Bolger’s well-placed delivery in the 38th minute. Mullinahone wouldn’t score again for another 12 minutes though.

In that period four unanswered points from Killenaule seemed to suggest it would be Killenaule who would be advancing to meet Carrick Swans in the final. Two from play from John O’Dwyer levelled matters at 1-13 each by the 43rd minute.

The lead point from a Bubbles free came from swarming pressure forcing a Mullinahone defender to overcarry; it was an admirable feature of the game, the workrate from both sides. When Dara Fitzgerald tapped over his third point of the evening, after Eoin Shaw had won possession well, Killenaule were two points clear with 10 minutes to play and looking the better at that stage. However, they weren’t to score again thereafter.

A magnificent point from the halfway line by Kevin Bolger was quickly followed by another CJK point from Micheál Dunne and once more the sides were all square, 1-15 apiece, with eight minutes remaining.

Then came the match-winning O’Shea goal followed by a last minute pointed free from veteran Eoin Kelly, again coming from pressure exerted to force the free.

The first half was entertaining and closely contested but not at the pitch expected of a South senior championship semi-final. At the end of the first quarter Mullinahone led 0-5 to 0-4. Four of the five Kickhams points came from play from Mikey O’Shea, Micheál Dunne, and two excellent efforts from Jack Shelly (plus an Eoin Kelly free), while all four Killenaule white flags were from John O’Dwyer frees.

By the 18th minute Mullinahone had stretched the lead to four with points from Martin Kehoe, Eoin Kelly (free) and Mikey O’Shea after Jack Shelly had put him in the clear.

Killenaule struck back with three of their own from John O’Dwyer (two frees) and eventually their first from play after 20 minutes scored by corner-forward Dara Fitzgerald from a tight angle to make it 0-8 to 0-7.

The lively Mikey O’Shea, having brushed aside a strong but fair shoulder, cut in from the sideline  to score a rousing point and Mullinahone were three ahead again after Eoin Kelly sent a free between the uprights from his own 65 metre line.

The last two scores of the first half were both for Killenaule’s John O’Dwyer, a 65 and his first from play from all of 70 metres out.

Mullinahone on the run of play probably just about deserved the victory. The South Division’s only Dan Breen Cup side were well served on the night by Paul Curran, Colin Shelly, Eoin Fennelly, Kevin Bolger, Martin Kehoe and a forward unit of which four scored from play. Goalkeeper Alan Walsh also got down low late on to deny Mark Stakelum a Killenaule goal. Manager Sean O'Regan will be demanding an improved performance in the final.

For Killenaule, Tom Keaveney, Cian Johnson, Jimmy Feehan and especially Paudie Feehan were solid in defence. Ciaran O’Dwyer and Tom Stakelum held their own at midfield. The over-dependency on John O’Dwyer for scores - and Bubbles was in fine form - was significant; only two other forwards managed to get on the scoreboard. That said they were right in there with minutes remaining but this year wasn’t to be theirs, at least not in the South.

Footnote: Credit to the Carrick Swan club for having the pitch in such superb condition and stewarding the event excellently.