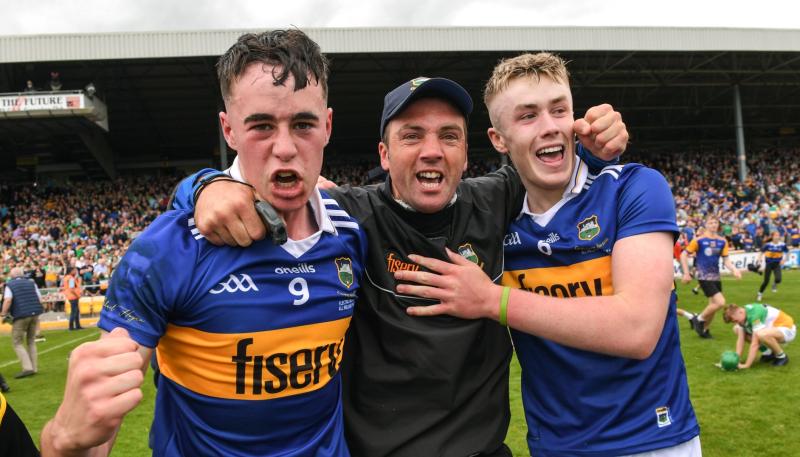 A sensational finish to this afternoon's Electric Ireland All-Ireland minor hurling championship final at UPMC Nowlan Park saw Tipperary collect their 21st crown in the grade and a first since 2016.
Offaly will claim that it was daylight robbery, when they seemed poised to win their fourth All-Ireland minor title and a first since way back in 1989, only for a last-gasp Tipperary goal to deny them their hour of glory.
However, not for the first time this year, this Tipp team snatched victory from the jaws of defeat, just when all seemed lost. They had pulled it out of the fire in the Munster final against Clare and the All-Ireland semi-final against Galway, and once more they produced something exceptional at the death to retrieve what looked like another lost cause.
Offaly shaped as the likely winners for much of a game played in front of a bumper attendance of 20, 214. Six points ahead at the interval, The Faithful County team looked to have done enough throughout the second half to secure the win and coming down the home straight they were still well placed to wrap up that historic victory.
But they hadn't reckoned with the sheer resolve of this Tipperary outfit and their stubborn refusal to accept defeat.
Two incidents that occurred within the space of a few minutes in the closing ten minutes suggested that an Offaly win was a certainty. Cathal Robinson was struck by a flying Tipp hurley when he had only Tipp goalie Eoin Horgan to beat, and after a lengthy delay Damien Corbett received a red card for throwing the hurley.
When Adam Screeney tapped over the resulting free, Offaly were six clear with as many minutes to play against 14-man Tipperary. Surely, nothing could stop Offaly from getting their hands on the cup and basking in their day in the sun.
However, this Tipp team is nothing if not determined. Points from Jack O'Callaghan, Sam O'Farrell and Paddy McCormack, following a great catch, edged them closer as the minutes ticked away.
As the final entered four minutes of additional time, Offaly restored a four-point lead through another Screeney free after Leigh Kavanagh had been unceremoniously hauled to the ground by Sam O'Farrell, who was given a yellow card for his troubles.
Yet, in the last ten minutes it was noticeable that the Tipp players were lasting the pace better. At least three Offaly players crumpled to the ground and were treated for cramp, while Tipperary kept driving forward.
Darragh McCarthy popped a free over the bar and when Aaron O'Halloran added another score from play there were only two points between them.
It looked like the goal they desperately needed to ignite their challenge would elude Tipp, but how wrong we were.
Offaly were nearly across the line but then Sam Rowan was pulled down as he advanced towards the danger zone. What followed raised Tipperary hearts, sank Offaly's and will never be forgotten by anyone present. Paddy Phelan lobbed the free in and around the square and Paddy McCormack proved the hero of the hour when he rose high among a forest of hurleys and flashed a one-handed shot to the net. It was incredible, quite incredible.
It was the seismic shift in terms of dominance in a full-blooded encounter. Offaly got the ball quickly back into play but the final whistle sounded within seconds, as a stunned attendance tried to make sense of it all, while Tipperary celebrated an unbelievable victory.

Tipp deserve enormous credit for playing to the final whistle and refusing to hoist the white flag of surrender, even if as a team Offaly imposed themselves better on the exchanges for much of the contest.
For Tipperary, Cathal English was terrific throughout. Damien Corbett was a real livewire, Joe Egan was always busy too, while Paddy McCormack's late strike was worth its weight in gold.
Midfielders Adam Daly and Ciarán Foley gave everything for the cause. Captain, Sam O'Farrell, Aaron O'Halloran and Jack Quinlan were nothing less than lionhearted, often in the face of adversity.
And the five substitutes gave renewed energy to their performance.
The choice of venue may have been the subject of some criticism but the large attendance at UPMC Nowlan Park, even if it appeared to fall slightly short of the predicted full house, created an electric atmosphere, appropriately enough, considering the sponsors of this championship.
Offaly supporters travelled in force, with their regular chant of "Uíbh Fhailí, Uíbh Fhailí" - occasionally answered by a spirited chant of "Tipp Tipp" - resounding around the Noreside venue.
The Leinster team responded to the encouragement of their supporters in the opening 30 minutes, when they settled faster from the start and were much the better team.
Half-time couldn't have come quickly enough for Tipperary. The sides were level six times in the opening half but Tipp took a battering from their opponents in the closing stages, when Offaly opened up a six-points advantage that they might even have doubled and put the game beyond Tipp's reach by the time the interval arrived.
Tipp went ahead by 0-7 to 0-6 in the 24th minute when Adam Daly, one of their best players in the opening period, fired over when he accepted Joe Egan's handpass.
However, in the remaining eight minutes of the half, including additional time, Offaly struck 1-4 without reply. Their spring-heeled corner forwards, Adam Screeney and Daniel Hand, did untold damage to Tipp's prospects and in the closing phase of the half Screeney had two points and Hand another to open a three-point gap.
Then right at the end of normal time, Leigh Kavanagh ran onto a crossfield pass and tucked a low shot into the net to make it 1-10 to 0-7.
It might even have been worse for Tipp. Cathal English, who got through a huge amount of work, made a vital challenge to deny Niall Furlong when he was clean through on goal and then Adam Screeney had two shots blocked when Tipp goalie Eoin Horgan batted away a long-range free.
On top of that, Offaly hit twice as many wides as Tipperary in the first half, eight to four.
Tipperary may have been down at that stage but they certainly weren't out, as they demonstrated with some force when the sides changed ends.
Tipperary: Eoin Horgan (Knockavilla Donaskeigh Kickhams), Chris O'Donnell (Ballylooby Castlegrace), Aaron O'Halloran (Carrick Swan 0-1), Jack Quinlan (Fethard), Sam O'Farrell (Nenagh Éire Óg, captain 0-1), Tadhg Sheehan (St Mary's Clonmel), Jack O'Callaghan (Portroe 0-1), Ciarán Foley (Borrisokane 0-2, 1 free), Adam Daly (Knockavilla Donaskeigh Kickhams 0-2), Joe Egan (Moycarkey Borris 0-1), Conor Martin (Cappawhite), Cathal English (Fr Sheehy's), Damien Corbett (Gortnahoe Glengoole 0-6, 4 frees, 1 '65), Tom Delaney (Cahir 0-1), Paddy McCormack (Borris-Ileigh 1-1).
Substitutes: Darragh McCarthy (Toomevara, 0-1 free) for Conor Martin (half-time), Senan Butler (Kilsheelan Kilcash) for Tom Delaney (46 minutes), Sam Rowan (Mullinahone) for Ciarán Foley (55 minutes), Jamie Ormond (JK Brackens) for Jack O'Callaghan (58 minutes), Paddy Phelan (Upperchurch Drombane) for Tadhg Sheehan (59 minutes).
Offaly: Liam Hoare, Caelum Larkin, James Mahon, Ruairi Kelly, Donal Shirley (0-1), Brecon Kavanagh, Ter Guinan, Leigh Kavanagh (1-0), Cillian Martin, Shane Rigney (0-2), Dan Ravenhill (captain 0-2 frees), Conor Doyle (0-1), Daniel Hand (0-3), Niall Furlong, Adam Screeney (0-6, 3 frees).
Substitutes: Cathal Robinson (0-1) for Cillian Martin (43 minutes), Mark Mulrooney for Donal Shirley (59 minutes), Shane Connolly for Daniel Hand (62 minutes).
Referee: Shane Hynes (Galway).