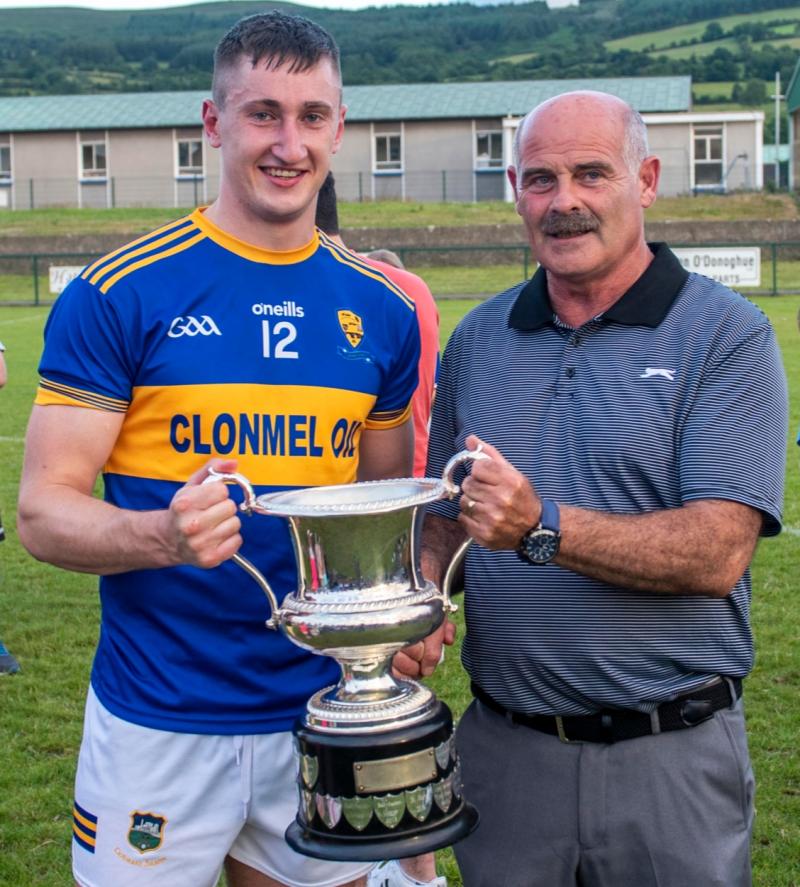 Kilsheelan/Kilcash captured the Martins Tile Centre South Tipperary Intermediate Hurling Championship at Clonmel Sportsfield on Saturday evening when overcoming holders Ballingarry by eight points in a final in which the challengers always seemed to be in control.

After a very slow opening 20 minutes the Suirsiders led by the minimum, 0-3 to 0-2, however, by the half-time interval had stretched their advantage to eight points, the same margin that existed between the sides at the final whistle.

Indeed soon after they scored their second goal in the 40th minute Kilsheelan were clear by all of 12 points (2-12 to 0-6) and the destination of the cup was beyond doubt. But credit to Ballingarry, with the introduction of a few substitutes and positional switches, they fought to the end but there was to be no denying Kilsheelan their first South Intermediate Hurling title since 2015.

The stand out difference between the sides were two players in particular, man of the match Paul Maher at centre-back who was very influential in his first game back this year after a shoulder injury, and county senior Mark Kehoe who ended the game with 1-6 for the winners.

An even enough opening had the sides all square after eight minutes with Mark Kehoe firing over the opening point after 38 seconds, soon nullified by a long range Conor Vaughan free for Ballingarry.

After five minutes Ballingarry hit the front (their only time in the game) with what was their only point from play in the first half, scored by Philip Ivors. It was soon back to parity when Martin Gibbs sent over a free for 0-2 apiece by the eighth minute.

A period of disappointing hurling went 10 minutes without a score before Martin Gibbs from play pushed Niall Walsh’s side into the lead in the 18th minute. Kilsheelan were then denied a goal with a super save from former county senior keeper James Logue who pushed a Daire Brennan effort, destined for the top corner, out for a 65 converted by Gibbs. Minutes later Logue dived low to save a goalbound effort from Mark Kehoe.

Eighteen minutes after their previous score, Ballingarry had their third and final point of the first half from a Dylan Walsh free - they also hit eight first half wides.

Kilsheelan captain Mark Kehoe was unlucky with a goal effort on 28 minutes, his effort coming back off the upright, but in the final five minutes of the opening half Kilsheelan pushed up a gear. Two excellent points from play from Mark Kehoe preceded their first goal. A long free delivered into the danger area was fielded by Daire Brennan and again after his shot was saved by Logue, Jamie Roche was on hand to guide the sliotar home, making up for the disappointment of having an earlier goal disallowed in the 15th minute.

The last score of the first half came again from Mark Kehoe, seizing on another excellent puck out from Tadgh Lonergan to turn and split the uprights for a 1-8 to 0-3 interval advantage.

Once more another super save by James Logue at the start of the second half denied Mark Kehoe, the Ballingarry custodian keeping his side at the races. 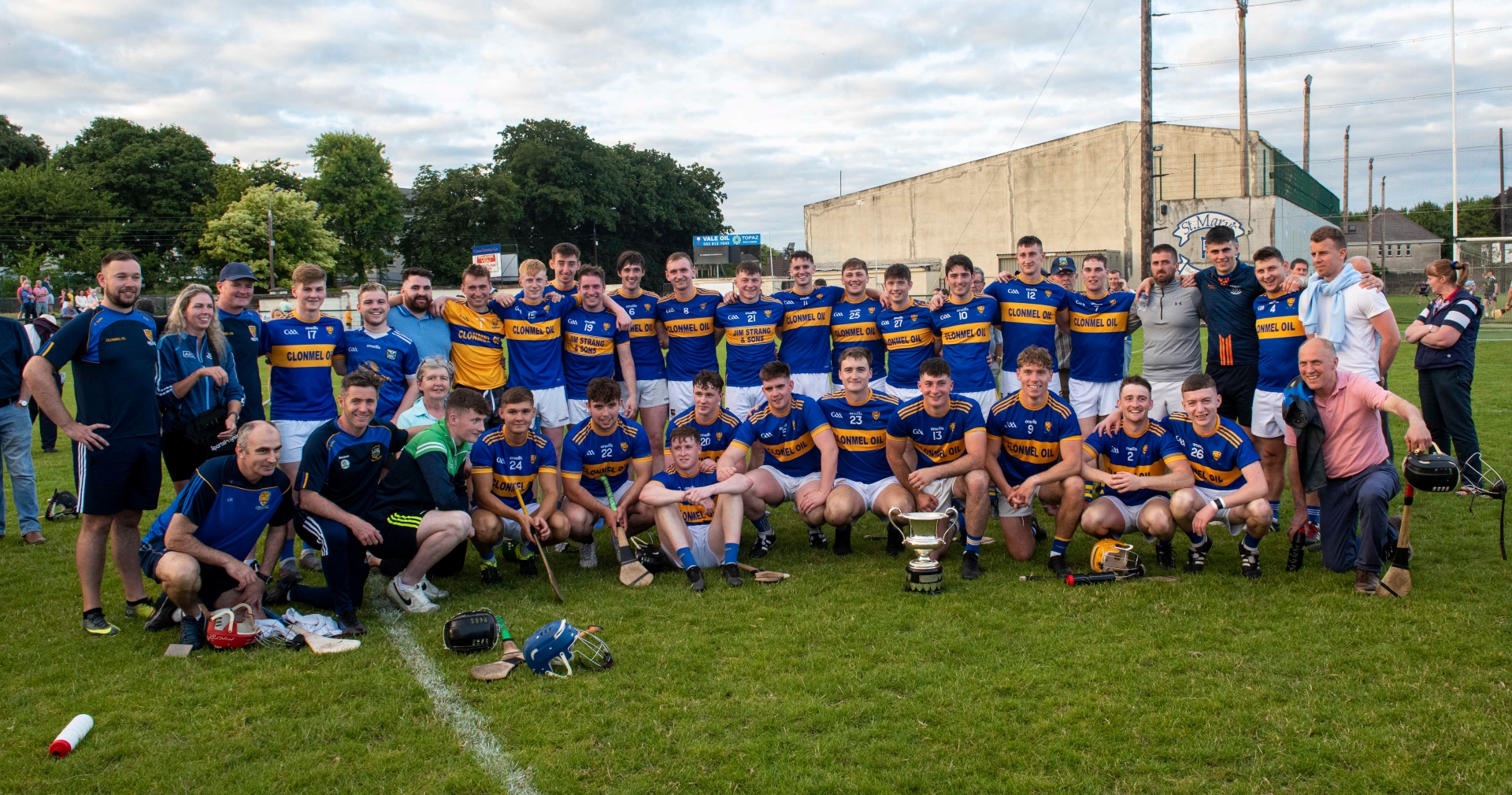 The Kilsheelan/Kilcash team and mentors celebrate after their first South Intermediate title success since 2015 when they defeated Ballingarry at Clonmel Sportsfield this evening (Saturday).

Over the opening eight minutes of the second period the sides shared three points each. Gibbs and Walsh swopped frees, before Aidan Keane finished a flowing Kilsheelan move with a point in the 35th minute. Ballingarry captain Michael Ivors and midfielder Conor Vaughan had two in a row for the Slieveardagh side, answered by Mark Kehoe with his fifth from play in the 38th minute.

The game was finished as a contest in the 40th minute when Logue, who had an excellent game overall, was blocked on the way out when attempting to clear and when the sliotar broke behind him Mark Kehoe had the easiest of tasks in guiding it over the line; credit also to Emmet Butler for the pressure exerted on the advancing keeper.

Martin Gibbs, who was to end the game with 10 points, fired over another free and after 42 minutes the scoreboard read 2-12 to 0-6. Game over as a contest.

Ballingarry then threw on three subs in a flash and that, with a bit of switching, brought about an improvement late on.

Within a minute of his introduction Stephen Donovan pointed for Ballingarry, quickly followed by two frees for Dylan Walsh. In between these frees Tadgh Lonergan pulled off a top-drawer save to block a rocket from Walsh - indeed a feature of the game were the displays of both goalkeepers.

But Ballingarry continued their mini revival with a goal created by Michael Ivors and superbly finished by Stephen Donovan in the 46th minute - a 12 points deficit halved to just six in only four minutes. It was as good as it got though for the defending champions.

Over the final 10 minutes Kilsheelan/Kilcash steadied the ship again to outscore their opponents five to three. Four placed balls from Martin Gibbs and another from play from Kehoe, to three points for Ballingarry from Walsh, Stephen Donovan (perhaps the best of the game) and a late free also from Walsh. 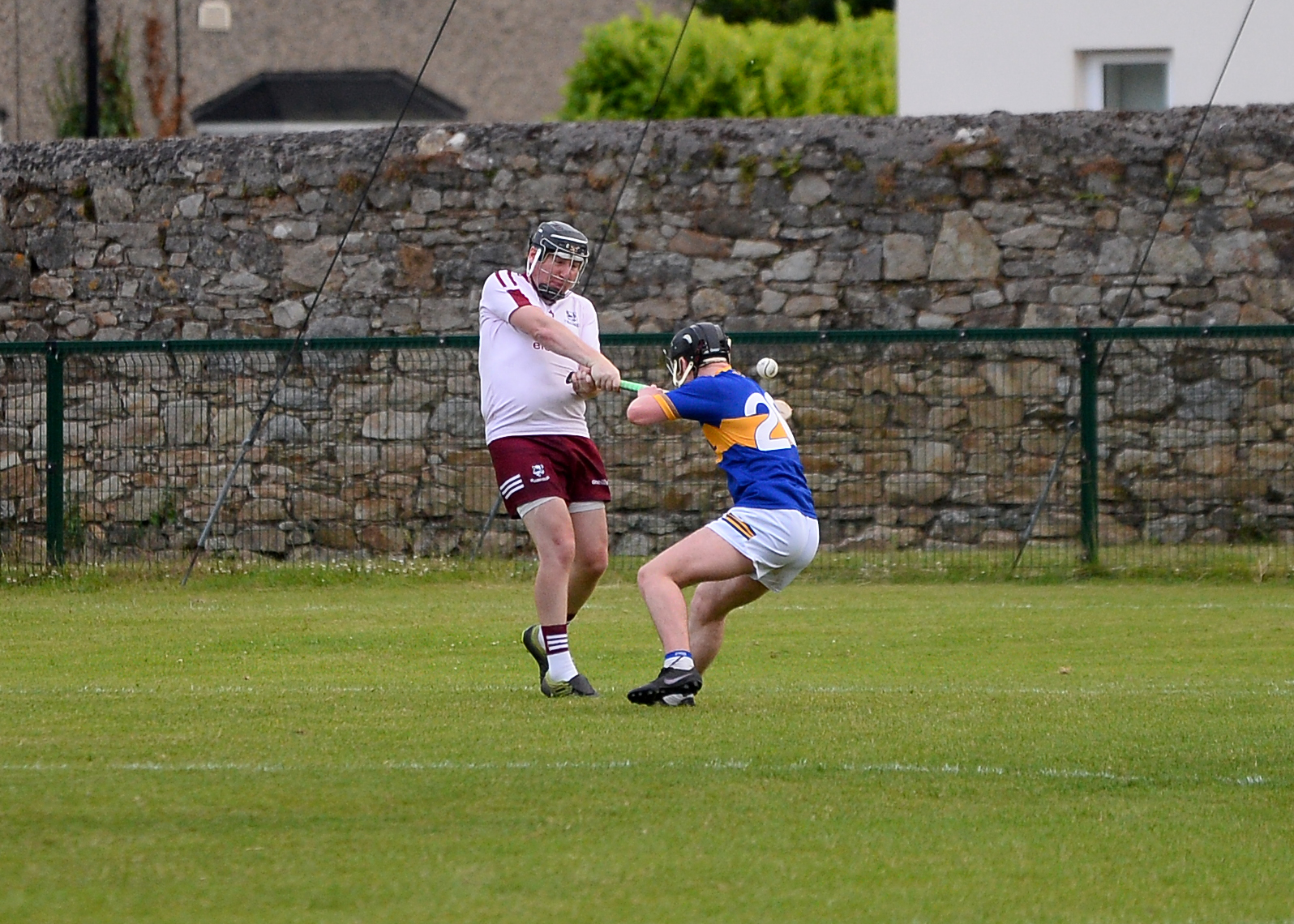 Kilsheelan half-forward Emmet Butler gets a block on Ballingarry goalkeeper James Logue and when the sliotar broke Mark Kehoe was on hand to steer it home for his side's second goal in this evening's South IHC final at Clonmel Sportsfield.

There was no doubt at the finish, the better side had won, and Kilsheelan/Kilcash could celebrate their first divisional win at this grade in seven years. With a full complement to call on they would be hoping for a good summer ahead.

Ballingarry will be disappointed they lost their way in the second quarter and never recovered, not helping themselves with a dozen wides over the hour. Adrian Cleere was a leader at centre-back while Aidan Ryan at midfield gave everything, others to have their moments were Brian Norton, Conor Vaughan, Dylan Walsh and substitutes Stephen Donovan and Thomas Walton.