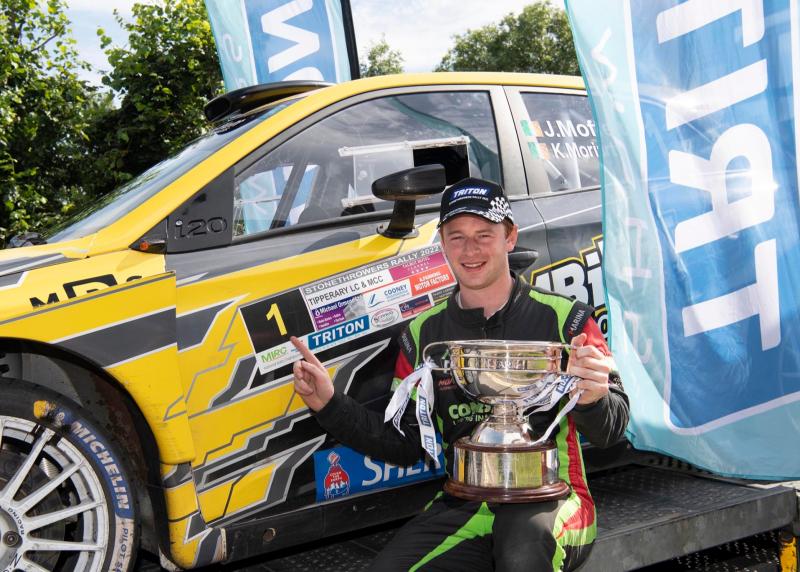 Monaghan’s Josh Moffett and his Limerick co-driver Keith Moriarty clinched the Triton Showers-backed Motorsport Ireland National Rally Championship courtesy of their start to finish victory in last weekend’s Clonmel based Tipperary Stonethrowers Rally, round six of the series that was organised by the Tipperary Light Car and Motor Cycle Club with John Ward as clerk of the course.
It was Moffett’s sixth win in as many rounds, the series concludes with the Galway Summer Rally (August 28) and the Donegal Harvest Rally (October 8).
Josh Moffett finished a minute and 9.6 seconds ahead of Dubliner Gareth MacHale (VW Polo GTi R5) and his Killarney co-driver Ger Conway with Cork’s David Guest/Jonathan McGrath, debuting their new Ford Fiesta Rally2, a further 39.5 seconds behind in third.
The Cavan/Derry combo of Chris Armstrong/Gavin Doherty (Ford Escort) were the top two-wheel drive crew, finishing sixth overall.
From a local context, Clonmel’s Casey Jay Coleman and Adam Coffey (Ford Fiesta) were the top Tipp crew, they won Class 2 and finished 25h overall.
The Fethard/Clonmel crew of Andrew Sheehan/ Deirdre Coffey (Honda Civic) were second in Class 2.
In Class 11F, Fethard’s David Healy (Honda Civic) was second followed by Cahir’s Colum Browne/ Kieran Carroll (Honda Civic).
The Cashel/Ballypatrick crew of Paul Manton/Derek Gibbs (Mitsubishi EvoX) were third in Class 20 and Cashel driver Konan Heney (Nissan Micra) won Class 23.
Moffett punched in the best time on the opening stage that finished near Fethard and led Cork driver Daniel Cronin (VW Polo GTi R5) by 4.9 seconds with Louth’s Brendan Cumiskey, also in a Polo, just eight tenths of a second further behind in third. Although late entry Armagh’s Darren Gass (Citroen C3) moved into second after the second stage, he bowed out on the final stage of the loop when a rear wheel hub sheared, spinning him into an early exit, luckily, his car escaped contact with a concrete pillar. 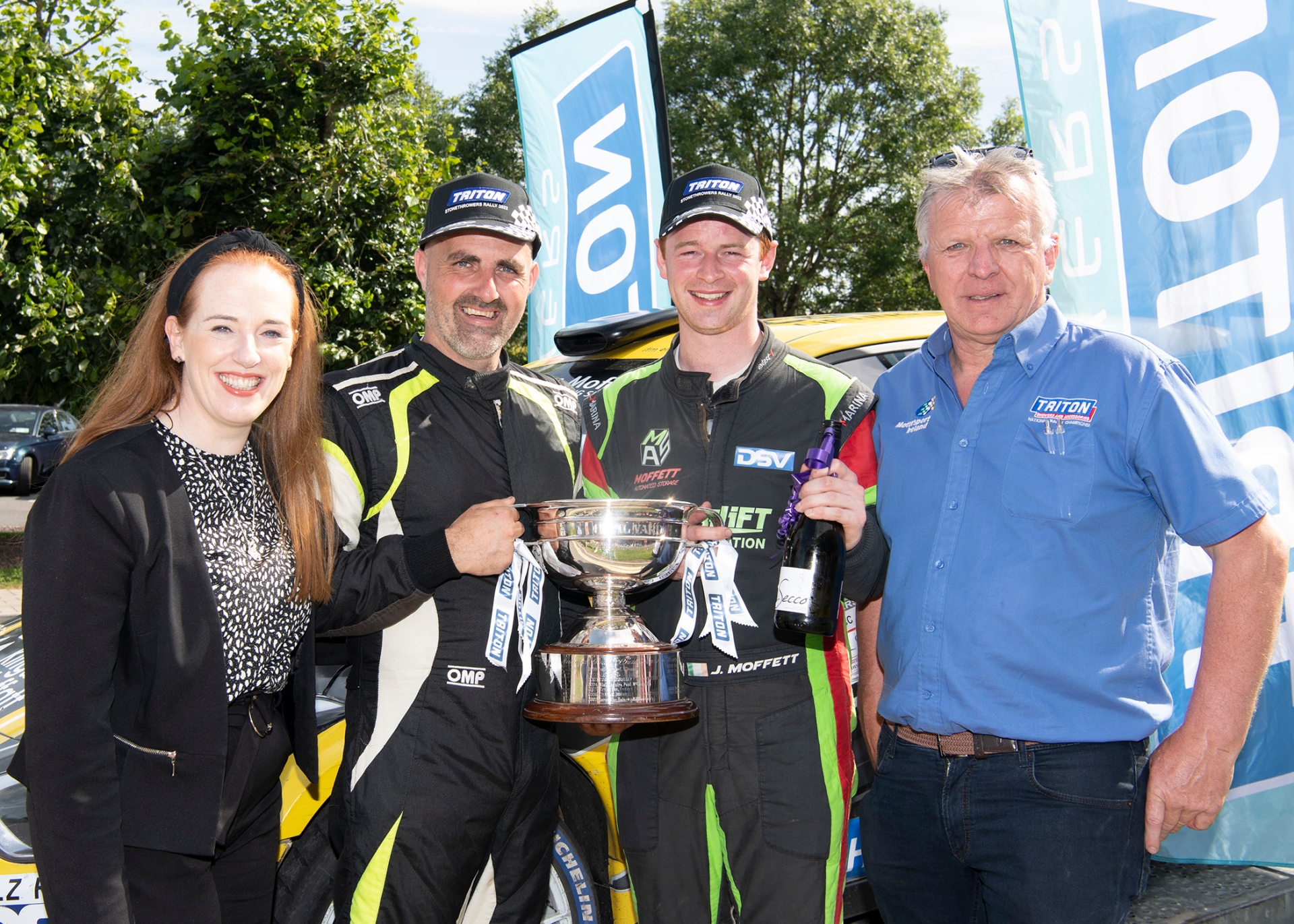 Meanwhile, Moffett, who topped the time sheets on all three stages of the loop, arrived at the Powerstown service park with a 16.6 second lead over Cronin.
“All’s fine, my tyres went off towards the end of the second stage and for whatever reason, I didn’t like the third stage, I couldn’t get into a rhythm so I pulled back a bit.” commented the rally leader.
Second placed Cronin admitted he was rusty on the opening stage, his first event in some 11 weeks. “It was hard to get the tyres working on the opening two stages but they were fine through the third stage.” Gareth MacHale (VW Polo GTi R5) was 13.8 seconds further back in third, he caught up with Owen Murphy’s ex-Jonny Greer Citroen C3 when the Cork driver had intercom issues.
Another Cork driver, David Guest in the ex-Callum Devine Ford Fiesta Rally2, who slotted into fourth clipped a rock on S.S. 2 and thought he had punctured, luckily, there was only slight damage to the wheel rim. Cumiskey was untroubled in fifth followed by the Fiesta R5 of Cavan’s Stephen McCann, who reckoned his car lacked the power out of the junctions.
Fellow Cavan man Chris Armstrong (Ford Escort) was seventh and led the two-wheel drive category. Meanwhile, Paul Barrett (Ford Fiesta R5) clipped a rock on the second stage. The top ten was completed by Tim McNulty (Ford Fiesta R5) and Padraig Egan (Ford Escort), McNulty had no brakes for the second and third stage.

The 28 brave 10,000 feet Tipperary Sky Divers have been named

Elsewhere, on the opening stage, Donegal’s Stuart Darcy retired with steering damage soon after his Proton crashed through a gate after he failed to negotiate a right hand junction. Welsh driver Wayne Evans (Ford Escort) crashed at the same location and retired instantly.
On the repeat loop, Moffett stretched his advantage to 55.1 seconds, Cronin retired his VW Polo after breaking a compression strut on S.S. 5, his demise promoted an untroubled Gareth MacHale into second - 25 seconds ahead of Guest, who continued to tweak the suspension of his Fiesta Rally2. Cumiskey, McCann and Armstrong followed. McNulty crashed on S.S. 4 and Owen Murphy parked his Citroen with an oil leak on S.S. 6. Barrett in seventh had issues with the rear differential. The Mk. 2 Escorts of Patrick McHugh and Ed O’Callaghan were next in classification, the latter feeling quite unwell. Gareth Sayers (Fiesta R5) was 10th.
On the final loop Moffett powered his way to event and championship victory. Gareth MacHale changed a punctured wheel prior to the final stage where he set equal fastest time with Moffett. Guest completed the podium line-up.
There were little change elsewhere, O’Callaghan retired as Jack Newman (Escort) repelled the challenge of Aaron MacHale (VW Polo GTi R5) for tenth by a mere tenth of a second. Armagh’s Jason Black (Toyota Starlet) was 12th.