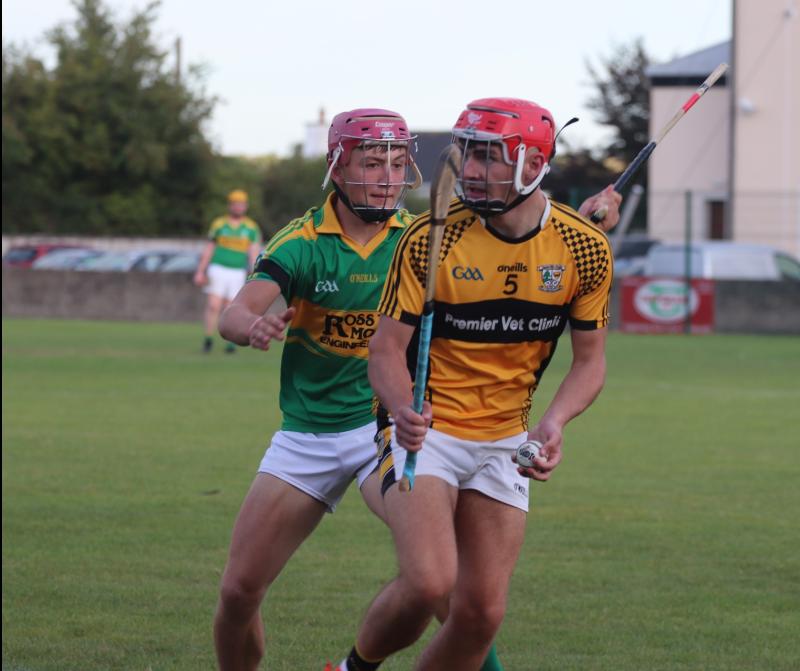 Eighty minutes of hurling failed to separate these two excellent teams in the Joe Hayes Cleanline West U19A Hurling Final at Golden on Wednesday evening. At the end of extra time, the sides were still locked together and referee John O’Grady made the decision, due to fading light, not to proceed to a penalty shoot-out. This, in my opinion, was a correct decision, taken in the interest of player safety.

The good size crowd were treated to a rip-roaring game, which really came to life following the half time break, the first half while being evenly balanced, was lacklustre enough. The quality of some of the scores were as good as seen anywhere, the tracking back, hooking and blocking ensured that the crowd were on the edge of their seats throughout. This contest was an advertisement for the game of hurling by both teams, played without rancour or any form of nastiness, a credit to both clubs and team mentors.

Both teams looked to have this game won at various stages, firstly Clonoulty in normal time and then Kickhams who went into an eight-point lead (5.16 to 3.14), six minutes into extra time. However, a solid comeback by Clonoulty in the remaining fourteen minutes, when they outscored their opponents by 1.6 to 0.1, meant that this game goes to a replay.

Clonoulty were first out of the blocks with Danny Slattery putting over at the far end, inside the opening minute. Both teams were off target before Paddy Kennedy followed up with a point from out near the sideline to double their advantage. The opening goal came in the third minute when Orrin Jones gained possession out on the left before blasting a low shot to the corner of the Clonoulty net, to go one up. Ninety seconds later the sides were level for the first time when top scorer, Stephen Ferncombe, put over his first score of the evening. Ferncombe from a 65 and Alex Carroll from play eased Clonoulty back in front, before a point from Orrin Jones cut the deficit to the minimum, with eleven minutes on the clock.

During these opening minutes both sides created goal chances, but failed to deliver, with neither side dominating, in what was a mediocre period of the game.

The second quarter produced more of the same, with two Kickham converted frees from Jones and Connor Horgan, either side of a similar score from Stephen Ferncombe tying up the game for the third time. Seven minutes before the interval, Jason O’Dwyer pulled off a point blank save from Orrin Jones, to keep the sides level. Jones eased Kickhams to the front with four minutes remaining, but in the closing minutes Danny Slattery and Ferncombe from a placed ball hit two points to ease Clonoulty back in front.

During this opening period, both sides were guilty of wayward shooting, with Kickhams shooting twelve wides to Clonoulty’s seven, in what was an even, but uneventful half, with Clonoulty leading by the minimum, 0.8 to 1.4.

The second half started at a much faster pace, with both teams upping their game. Kickhams hit the opening three points of the half from Conor Horgan (2) and Orrin Jones, going two up in the process. Stephen Ferncombe pulled one back when he converted from a sideline cut. Michael Gleeson and Danny Slattery then exchanged points. Scores were coming hard and fast. Stephen Ferncombe goaled from a twenty-meter free putting Clonoulty two in front, before Adam Daly goaled at the other end on twenty two minutes. Michael Gleeson put over his second of the evening, before Conor Kennedy netted Clonoulty’s second with five minutes of normal time remaining.

The closing five minutes plus injury time produced high drama. First, Clonoulty lost influential centre back and captain, Robert Doyle, to injury, Jamie Duncan fired over from half way, to tie up the game, Conor Kennedy eased Clonoulty back in front with a point, before Danny Slattery hit his fourth of the evening as the clock ticked down. Adam Daly got his second goal and Kickhams third goal and as the clock slipped into injury time, Stephen Ferncombe goaled from a penalty. Clonoulty were two points to the good and one hand on the Liam O Duibhir Cup, but Kickhams had other ideas. Two late scores, the first from a Conor Horgan free and one from play from Adam Daly tied the game for the seventh time on the score 3.13 to 3.13.

Extra time followed with Kickhams picking up where they left off. Shane Buckley put over his first point of the evening, before Orrin Jones put Adam Daly through and the half forward made no mistake, scoring his third goal of the game. Ferncombe scored from play before Orrin Jones hit 1.2 in a three minute spell. Kickhams were on fire at this stage, going into an eight-point lead six minutes into extra time. Clonoulty were not finished yet. Stephen Ferncombe hit four unanswered points before the break, cutting the deficit to four, with the second half (ten minutes) yet to come.

Ferncombe converted two 65’s in the opening three minutes after the break, but with players from both sides cramping up, play became broken. Orrin Jones broke Clonoulty’s momentum with a point, to go three up and two and a half minutes remaining.

The final drama of the evening was yet to unfold and came with a sideline ball to Clonoulty just outside the 45 meter line, under the stand. Stephen Ferncombe stood over the ball and his well struck shot went direct to the Kickhams net, with Eoin Horgan unsighted by the players in front of him.

The sides were level at 5.17 to 4.20 as John O’Grady called time to a wonderful evening’s entertainment. Both sides will meet again in the much-awaited replay as fading light prevented this encounter from going to a penalty shoot-out.