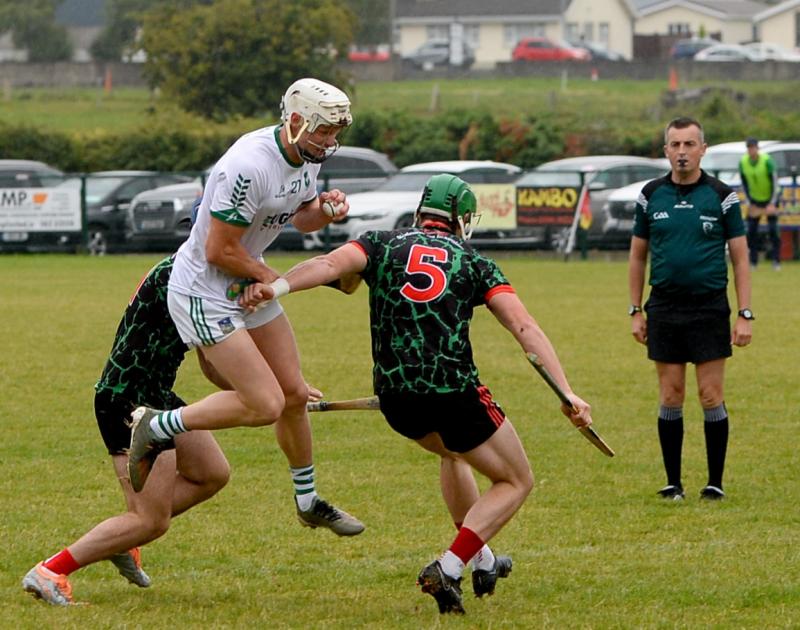 In the battle to extricate themselves from the relegation play-offs, Holycross/Ballycahill emerged comprehensive victors over Mullinahone in Group 3 of the FBD Insurance County Championship at Littleton on Saturday afternoon.

The Mid side’s facile 13-points victory guarantees retention of their place in the Dan Breen Cup for next year, but for the CJ Kickhams, they now face anxious times ahead if they are to remain the South division’s only representatives at the top table of Tipperary club hurling. On this latest performance they will have to improve significantly if they are to salvage something from a disappointing year to date.

With backs-to-the-wall and needing a victory to avoid the relegation play-offs, Holycross got off to a dream start with David Fogarty blasting to the net after only 12 seconds. And they took full advantage of that tonic start to make every post a winning one, six points up at the end of the first quarter and out the gap with a huge 12 points advantage at half-time.

The second half was a more even affair, Mullinahone at one early stage, rattled off four points from play without reply to reduce the deficit to its narrowest at nine points. But Holycross held all the aces, none more so than Darragh Woods who chipped in with an excellent performance which yielded 12 points over the hour.

A feature of Woods’ display were three excellent points from sideline cuts either side of half-time, all from the 40-50 metres range, his other scores included three from play and six placed balls converted.

By the end of the first quarter the signs were ominous for Mullinahone who trailed 1-6 to 0-3, with all three points from frees. 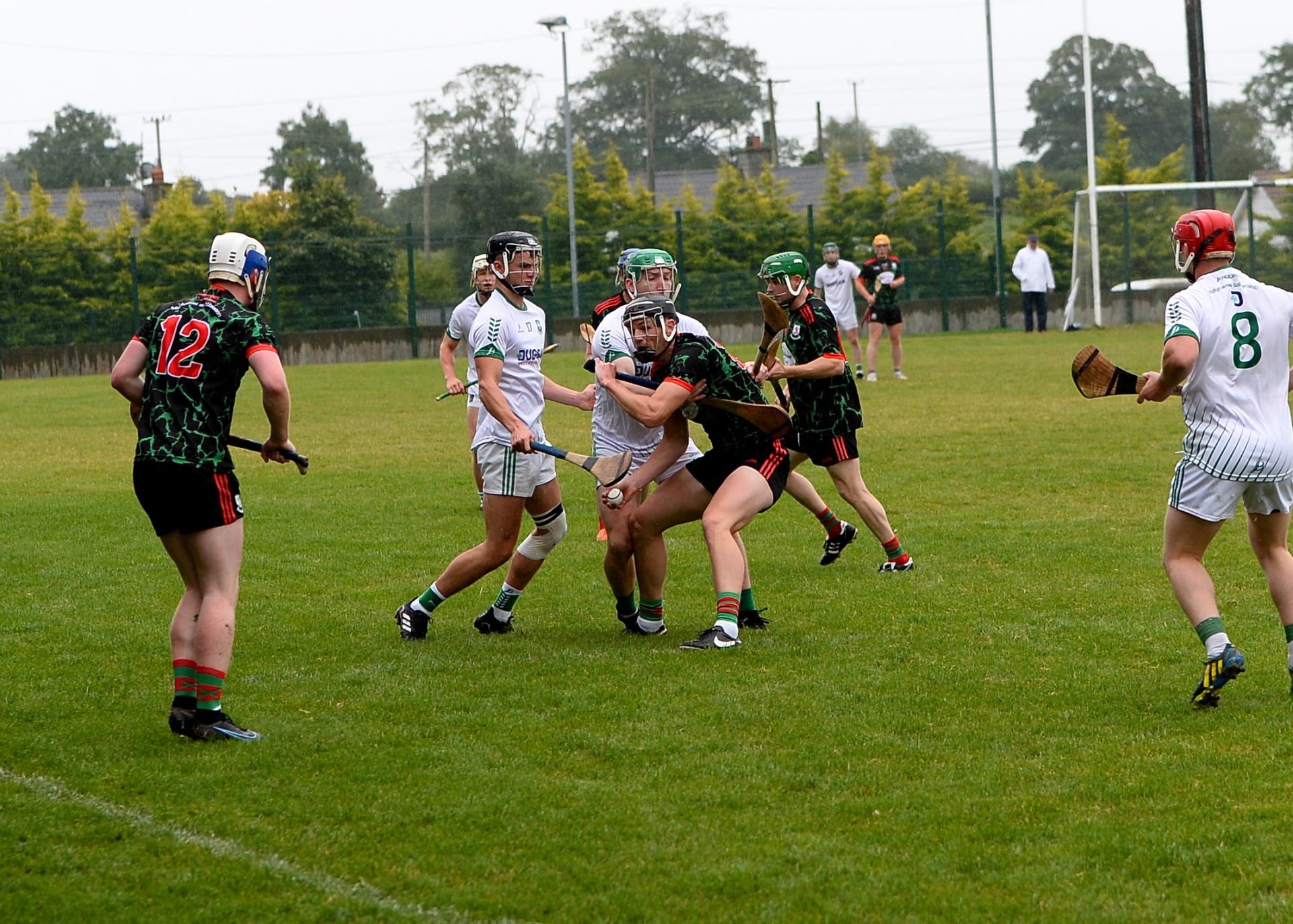 Mullinahone's Alan Curran under pressure from two Holycross players attempts to get his pass off to Martin Kehoe during Saturday's County SHC game played at Littleton. Pic: Michael Boland.

After the early goal, Holycross followed up with points from Jack Dwan and David Fogarty inside the opening four minutes; Mullinahone replying via two Jack Shelly frees.

Darragh Woods had his first point from a 65 nullified by another Shelly free to leave Holycross ahead by 1-3 to 0-3 after 11 minutes. Three further unanswered points for the Gary Byrne-managed Midmen, from Luke O’Mara, Darragh Woods (free) and Jack Dwan left them comfortably six up after 15 minutes.

Sixteen minutes in, Mullinahone finally had a point from play with Sean Curran scoring from halfway. However, with Bryan O’Mara commanding at centre-back for Holycross they hit a purple patch of seven points without reply to have the game well under control before the short whistle.

A fiercely determined Holycross were closing down on Mullinahone with an unmatched intensity and that constant pressure helped provide the springboard for their scores. David Fogarty, Joe Caesar (2), Shane Ryan, Darragh Woods (2, one free), Bryan O’Meara all pointed. Indeed the accurate forward division were in top form with just three wides over the opening half hour.

Sean Curran eventually stemmed that 10-minute dominance with a Mullinahone reply, but further scores from Darragh Woods and Paraic Russell stretched the gap to 12 points at the break.  Eoin Kelly, who had come on for the injured Eoin Fennelly, converted a 65 for Mullinahone just before the interval.

Briefly in the early stages of the second half there was a bounce from the South representatives. After Jack Dwan had opened the scoring for Holycross, Jack Shelly, Sean Curran, Martin Kehoe and Eoin Kelly had four in-a-row to make it 1-16 to 0-10 nine minutes after the resumption. It was as good as it would get though for the CJK and Holycross steadied up again to close out the comfortable win.

Having sliced two first half sliotars over from the sideline, Darragh Woods did it again in the 41st minute, before Conor Whelan replied with a long range effort for Mullinahone.

Another free from Darragh Woods and a fine point from 65 metres from David Fogarty, preceded a similar long range effort from veteran Eoin Kelly. At the three-quarter mark it was 1-19 to 0-12 for the Suirside villagers.

Down the stretch with the game long decided it was pretty much point for point, with Holycross in particular hitting some super points from Darragh Woods (5, one free) and Joe Caesar (2). In response, on a very disappointing day for the Mullinahone side, they had late scores from Eoin Kelly (2, one free), Martin Kehoe and Conor Whelan. 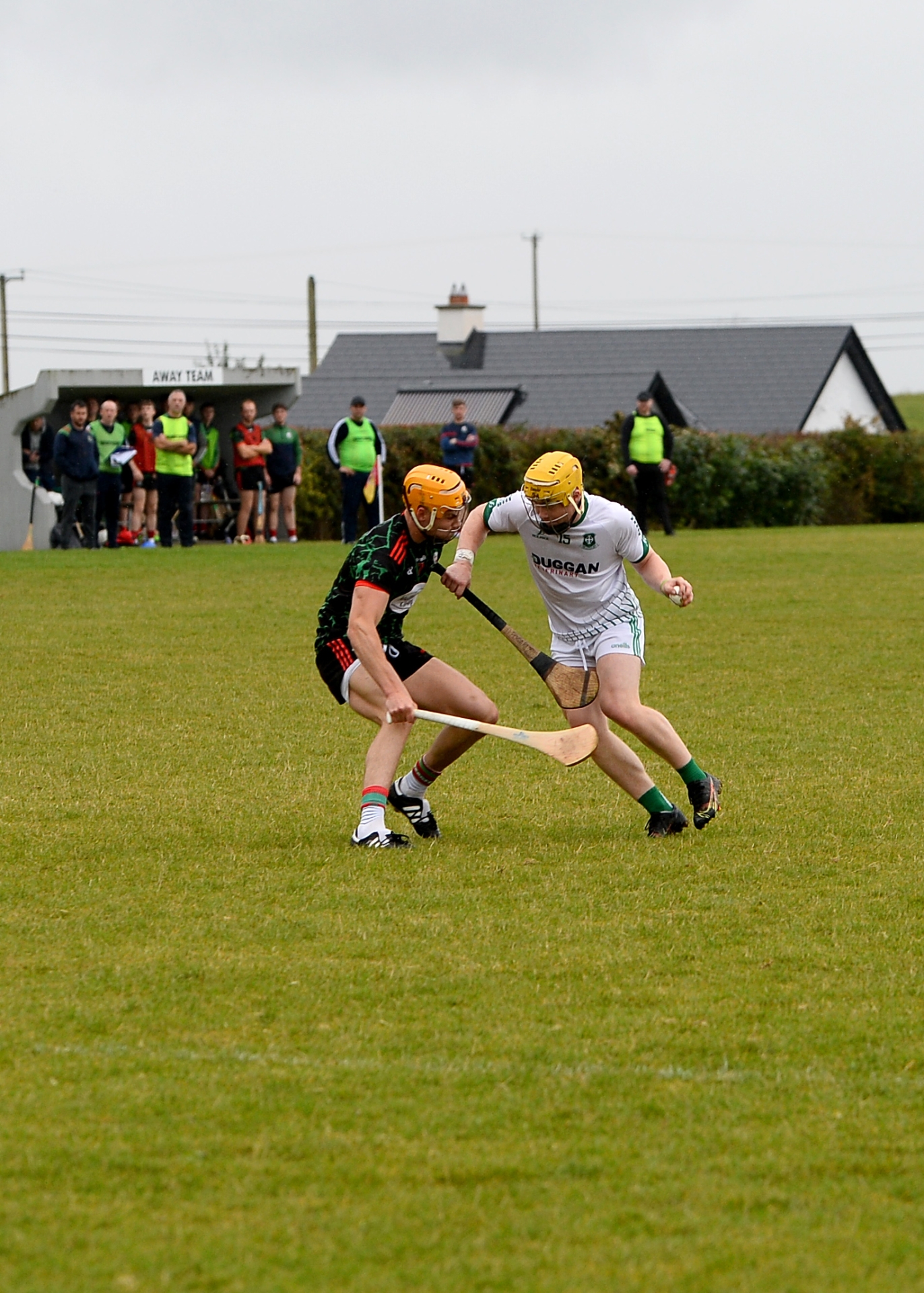 David Fogarty (Holycross/Ballycahill) attempts to get past Conor Whelan (CJK) in Saturday's County SHC Group 3 Round 3 game at Littleton. David Fogarty scored the only goal of the came coming after 12 seconds to set his side up nicely for ultimate victory. Pic: Michael Boland.

Holycross were deserving victors and relieved to have their season concluded now with senior status secured. Their defence was solid throughout led by the influential Bryan O’Mara in front of the vastly experienced Cathal Barrett and never came under serious threat of conceding a goal. The centre-field pairing of Jamie Woods and Paraic Russell held their own, with all six starting forwards making the scoreboard.

Mullinahone, in a rebuilding process in recent years, are now in danger of the drop, and will be hoping that both Eoin Fennelly and Alan Curran who went off injured will be available for the play-offs. A busy defence saw solid showings from Paul Curran, Alan Curran, Colin Shelly and Conor Whelan. Sean Curran never gave up around the middle, but there wasn’t enough firepower up front to trouble Holycross, Eoin Kelly and Jack Shelly were most to the fore in a losing battle.