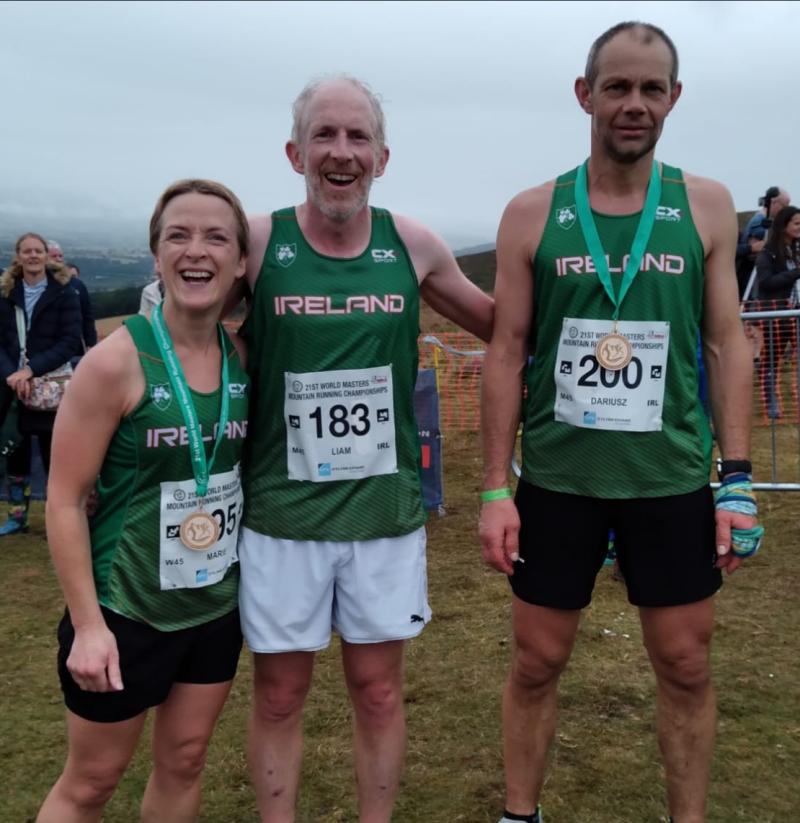 We are all familiar with the song ‘Chapel on the Hill’ but this weekend saw us at the cross upon the hill, a pilgrimage site upon which a cross has stood since the Holy Year of 1950. The Holy Year Cross is on top of Cnoc Chomortais in the Comeragh mountains offering views over Clonmel, across the Suir valley and over to Slievenamon and beyond.

The past weekend’s event was the brain child of Patricia Blackburn as she sat outside a coffee shop a few years back after part taking in the yearly world event herself.

In 2018 her dream became a reality when Ireland were successful in their bid to host the 21st world masters mountain championships in 2021. Unfortunately in the mean time Covid 19 hit and Ireland success to hold the event was put on hold until 2022.

And it was a weekend to behold and see the extravaganza, dedication and commitment come together with the amazing support that has surrounded the local organising committee.
The weekend began on Friday evening with a parade of nations through the streets of Clonmel and the hoisting of the world championships flag followed by traditional music and a nations welcome pasta party.

As daylight peeped over the horizon on Saturday that much longed for rain after a very dry season had begun but it didn’t hang around for long. From 8am Hillview Sports club in Clonmel became a hive of activity as 800 national and international runners began to descend in the area for the event. The horn for the first race sounded at 10am followed by 5 year descending age category ages every 15 minutes until 1.45pm.

RIP ROARING SUCCESS
The biggest rip roaring success for the club came in the form of Tom Blackburn and Willie O’Donoghue. Tom Blackburn battled with his own coutryman and crossed the finish line third in his category taking an individual bronze medal and secured the second place scorer on the Irish M55 sliver medal winning team.

Willie O’Donoghue grappled with the third scorer for team Great Britain throughout the race running his heart out. Proudly Willie led home the Irish team in his category finishing sixth overall himself leading himself, Sean Foley (7th) and Conor Nolan (9th) to a world masters silver medal.

VOLUNTEER SUPPORT
Race Directors Patricia and Tom Blackburn had massive club support with many club volunteers supporting them along with the LOC (Local Organisation Committee) which itself boasted 7 Mooreabbey Milers club members.

Thanks to all involved in making it the success that it was not alone on the Thursday, Friday, Saturday and Sunday but on the days, weeks and months beforehand Jane and Ger Griffin, John Hayes, Patricia Ryan, Robert Cunningham, Willie O’Donoghue, Lynda Hynes, Mairead Hynes, Davena Flynn, Mandy Parslow, Damien Holian, Ger Hanley, Liam O’Donnell, Liam Lewis, Deirdre Bailey, Michael Bailey, Marie O’Shea, Deirdre Hayes, Edel Leonard, Shinead Blackburn, Ann Cummins and our countless other volunteers from Clonmel Town, IMRA, IMRA Munster, Hillview, Co. Tipperary athlete's and their families and people of Munster and beyond. Hillview Sports club provided our base for the weekend thanks guys it was such a pleasure dealing with you all.

Thanks to the World Masters delegates, the course landowners and residents, our sponsors, Raheen school, civil defence, first aid, catering, bakers and donators, physios, the juvenile members of Mooreabbey and Clonmel AC for flag bearing in the parade on Friday night, Hillwalking radio club, the bus company for getting spectors to and from the finishline, Eoin our MC for the weekend what entertainment, musicians, bands and dancers, sports splits timing, the people of Clonmel for letting us take over their town for the weekend.

Finally to the Mederia delegates to who Patricia and Tom Blackburn handed over the WWMRA flag as the final stage of the closing ceremony we wish you every success to in 2023.