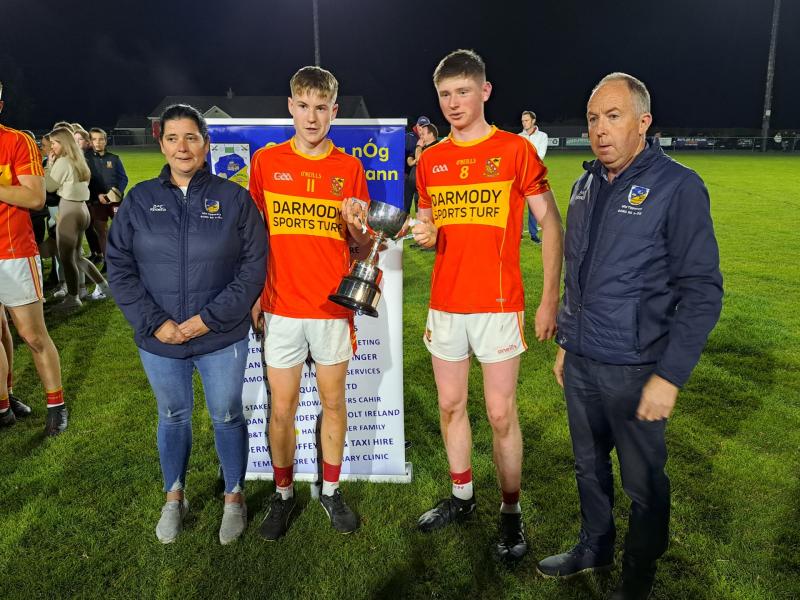 Two sleeping giants of the hurling world slugged it out in the Stakelums Office Supplies Mid Tipperary U17 A hurling final at Templetuohy on Monday evening to produce a pulsating contest with the honours going to Moycarkey Borris over their neighbours Holycross Ballycahill.

As good an underage game of hurling as you are likely to see, the initiative swayed this way and that with some superb score-taking, wonderful defending, and really manly fare characterising a game for the ages - a precursor perhaps to the county final a little further down the line? If there is a better U17 team out there than these two sides, they must be something very special indeed.

The brilliant start which Moycarkey Borris got off to set the tone for the game - Holycross Ballycahill were in arrears by 0-8 to 0-2 by the end of the first quarter, and they were forced to chase the game from then on, with their rivals managing to keep them at arms length all the time. One on occasion in either half, the deficit was down to the bare minimum but Moycarkey Borris with star showings from Liam Corcoran, Jack Hayes, Joe Egan, David Costigan and Sean Hayes always had a little extra to pull away again - keeper Frankie Butler making two fine saves also from Robbie Ryan to prevent further Holycross Ballycahill majors.

A goal with three minute to go to the interval from James Doyle brought Holycross Ballycahill right back into the game and by the interval they trailed by 0-13 to 1-8 - Jack Hayes having accounted for five of the Moycarkey Borris scores, while Joe Egan  had three and David Costigan two.

As they did in the first half, Moycarkey Borris leapt into action upon resumption, hitting four unanswered points again to reclaim a six point advantage. Holycross Ballycahill had to go the long route and when Jimmie Lahart goalled brilliantly for them in the 19th minute to reduce the lead to three, they were back in business.

But, resolute defending from the champions saw them over the line despite Holycross Ballycahill getting Robbie Ryan (3) and Liam Doyle points as they raced towards the finishing line - Robbie accounting for nine of their total. Liam Corcoran and Jack Hayes came up with the scores to leave their side in front when the final whistle sounded on what had been a really brilliant contest.

Both sides really went for the jugular in this game and it was brilliant to see - an intriguing, absorbing and thrilling game which speaks volumes for the strength of underage hurling in the mid Tipperary division at the present time.