West Tipperary U19 A Football: Arravale Rovers retain their silverware

The game at Rockwell Rosegreen was played at Golden 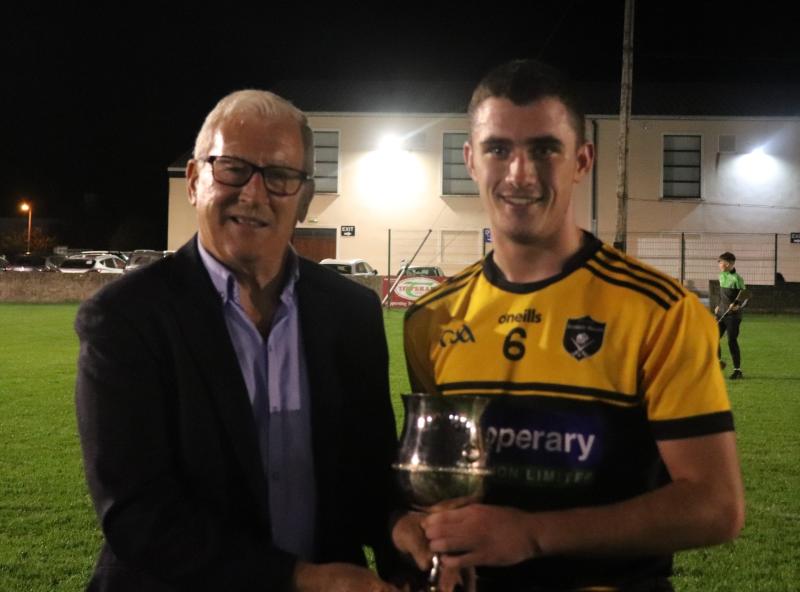 By: Francis Coughlan at Golden

Arravale Rovers retained their Tipperary Print & Design West U19A Football Championship crown after fending off a strong second half comeback from the opponents Rockwell/Rosegreen on Wednesday night under lights in Golden.

Goals from Evan Hawkins and Gavin Cussen were key for a more physical Arravale Rovers as they defended their title. Their ability to take control of the game after a slow start turning a four-point deficit into a four-point lead and then doubled it early in the second half was crucial to their success. Rockwell/Rosegreen never gave in and took the game to their opponents right to the end but Arravale had done the damage before and after the break and they could never get the deficit below three points.

Rockwell/Rosegreen started brightly taking the game to Arravale Rovers. The running of Kevin Keating was a huge asset for the combination as their movement had the Arravale Rovers defence in bother. Tom Downey, Padraig Quinlan and Joseph Lawrence were some of their main performers and the latter opened the scoring with a point from play in the third minute.

Their movement continued to cause problems and a well worked move through the hands resulted in Conor Hennessy raising the first green flag of the game four minutes later. Sean O’Mahoney got Arravale off the mark with a well taken point and the wing forward would have a big say in proceedings as the game progressed. Joseph Lawrence returned in kind for Rockwell/Rosegreen but by now Arravale were limiting the combination space and coming far more into the game.

Jack Ryan on as an early sub for the injured Caolan Halligan along with Raymond Kelly, Micheal Lowry and Eoghan Lonergan were now to the fore for Arravale. Eoghan Lonergan did have a good goal chance before Arravale Rovers raised a green flag. Evan Hawkins finding the net after taking a pass from Caleb Hickey to tie the game.

Points from Eoghan Lonergan, Micheal Lowry, Caleb Hickey from a mark and Sean O’Mahoney saw the Tipperary town side open a four-point advantage after being four points down early on. Joseph Lawrence ended Rockwell/Rosegreen’s drought with their first point in fourteen minutes but further points from Evan Hawkins and Caleb Hickey had Arravale Rovers ahead at the break 1-8 to 1-3.

Rockwell/Rosegreen introduced Colin Geraghty and he made an immediate impact when he pointed just after the resumption although his effort could easily have gone under the bar. The game looked over after eight minutes with Arravale Rovers tacking 1-2 on the board. Points from Eoghan Lonergan and Micheal Lowry arrived either side of a Gavin Cussen goal.

A quick free to Evan Hawkins saw him put in a ball across the goal which was palmed to the net by Gavin Cussen. Raymond Kelly then brought a great save from Eoghan Doyle in the Rockwell/Rosegreen goal. The combination though now took the game to the defending champions with the running again of Kevin Keating while Tom Downey and Joseph Lawrence continued to cause problems.

Lawrence ran at the Arravale defence at every opportunity and following Kyle Burke’s point he cut a hole in the Arravale defence and found the bottom corner of the net. Lawrence and Cian O’Brien now pointed to cut the gap to three points with twelve to play. Rovers rallied with two Evan Hawkins pointed frees to bring the gap back out to five with the clock now four minutes from the red.

Conor Hennessy from a mark and a Cian O’Brien free saw Rockwell Rovers keep in touch but they just couldn’t break the three-point barrier. Sean O’Mahoney brought the difference back out to four and it would prove enough. When Arravale regained possession, they were now content to keep ball as injury time played out, working the ball through the hands and then going back down the field before eventually the final whistle went.