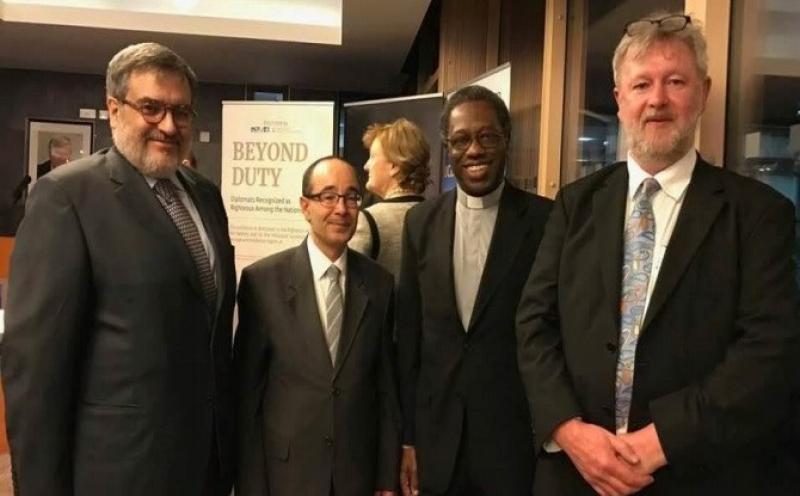 The event marked the launch of a presentation entitled "Beyond Duty: An Exhibition on the Diplomats Recognised as Righteous Amongst the Nations."

This highly important exhibition was organised by the Israeli Embassy, Dublin and the much admired and pioneering Israeli Ambassador accredited to Ireland, H.E. Mr. Ze'ev Boker.

During the launch, Archbishop Okolo informed Dr. Casey that he very much looked forward to receiving H.H., Pope Francis in Ireland in August, the first such visit by a Sovereign Pontiff to the country in nearly forty years. While Dr. Casey has not, as yet, met Pope Francis, he had, during his Finnish posting to Rome (Villa Lante, 1992-1994), established a strong cultural and educational relationship with the then Cardinal Joseph Aloisius Ratzinger, later to become Pope Benedict XVI (now emeritus).
On the subject of the Roman Catholic Church, Dr. Casey distinctly recalls one of his Eminence's more memorable statements to him in the library of the Apostolic Palace, Vatican City during a private audience granted by H.H., Pope/Saint John Paul II:
A democracy

"The Church is not and can never be a democracy. In terms of conviction, an individual's faith, as tragically evidenced in so many Western (and Global) societies/economies, should never be dictated by so-called fashion trends, flawed self-serving, political egos - male and female - and the latest innovations in technology."

On general ecclesiastical matters, Dr. Casey expressed sadness on the recent death of the German-born Cardinal Carl Lehmann, a former professor of theology at the Universities and Mainz and Freburg (Germany), who had many connections with prelates from Tipperary.