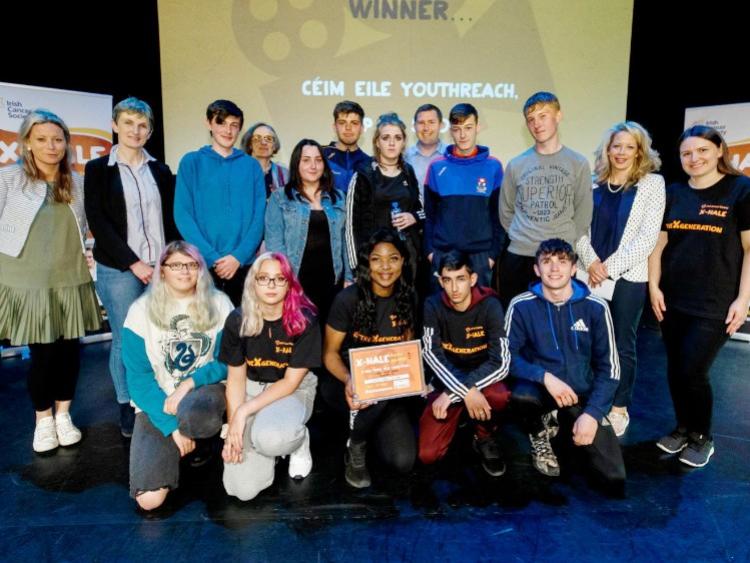 The Céim Eile students at Templemore College of Further Education recently produced a short film about the dangers of smoking.
The film was made as part of the Irish Cancer Society’s X-HALE 2019 Short Film Competition. The initiative supports youth groups to spread the word about the dangers of smoking by creating a short film that encourages young people to be smoke free.
The students along with their teachers Rachelle Kennedy, Nicola Welford, Marian Ryan and Youthreach Co-Ordinator David Young travelled to the Helix in DCU, Dublin for the awards ceremony in early July. This provided all entrants the opportunity to watch each others films and the winners were announced on the day. It was a great surprise to the Céim Eile students when they were announced as the winners of ‘The Judges Choice Award’.
It was a fantastic accolade for the students to receive and all parties were proud of their achievements. This has been the first time for the Céim Eile group at Templemore College of Further Education to enter the competition, so a win was a fantastic bonus for them.
Céim Eile Programme Co-Ordinator David Young said that he ‘was very proud of the students and their short film and winning the award was a fantastic acknowledgement of all the work and creativity that the students had put into it’, he went on to say that ‘the role of our Youthreach programme in Templemore College is to encourage and develop creativity and above all empower the students with confidence and self esteem, to ultimately believe in themselves’.
As part of the project the students were involved in educational workshops and discussion topics around the dangers and consequences of smoking.
The students learned new skills in the areas of scriptwriting, storyboarding, filming, editing and acting. The also worked really well as a class group and are now more aware of the negative and health implications of smoking.
Their art teacher Rachelle Kennedy said ‘It was fantastic to see the students embrace the project from the very beginning, they really took ownership of it and the whole process was an enjoyable one’. The Irish Cancer Society provided film workshops for some of the students and all other workshops and training were facilitated by the Creative Media Co-ordinator, Nicola Welford who teaches in the Media Department at Templemore College of Further Education.
The film is entitled ‘Up in Smoke’ and can be viewed on You Tube.