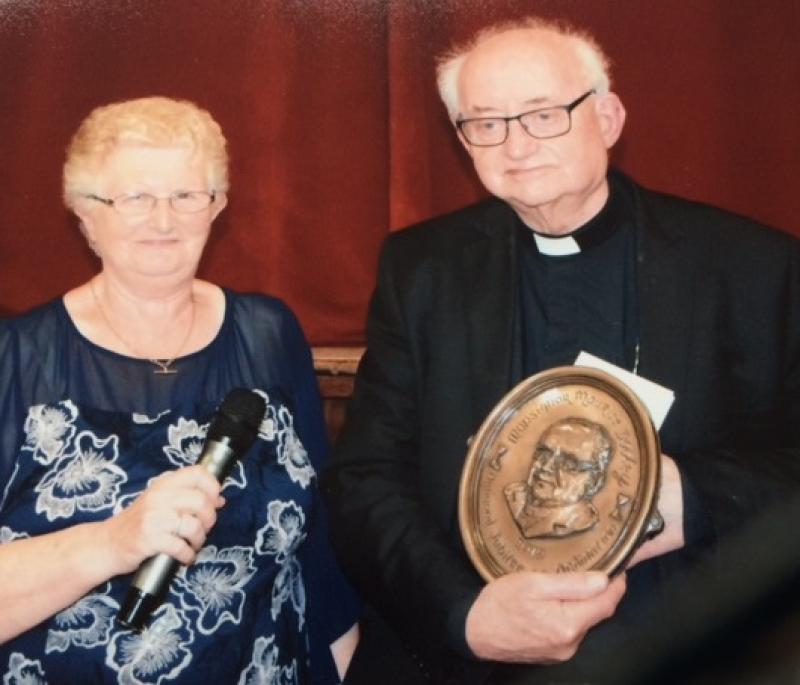 On Friday, August 30 Loughmore Castleiney was en fête as it paid tribute to Monsignor Dooley on the Diamond Jubilee of his ordination to the priesthood.
The Monsignor, as he is affectionately known in the parish was one of five children, three boys and two girls, born in Croke St, Thurles in August 1934, and was ordained to the priesthood in Maynooth on 21st June 1959. Following his ordination he was sent for further studies for two years and was awarded his Doctorate of Divinity (D.D.) in 1962 and began teaching at St Patricks, Kiltegan that same year.

In 1964 he was appointed to the teaching staff of St Patrick’s College, Thurles where he remained until 1992, with a break for one year in 1966 when he studied in Rome and was awarded his Licenciate in Canon Law. (LcL). During his ministry he was, for many years, an Observer for the Vatican at meetings on health, bioethics, and convention law in the Council of Europe in Strasbourg. In 1992 he was appointed as Parish Priest of Loughmore/Castleiney, where, though retired from this position since 2009, he still resides in Loughmore and is very much immersed in the life of the parish.

His two brothers were ordained to the priesthood and spent many years in Australia where one, Fr Joseph still resides. Unfortunately his other brother Fr. Brendan died some few years ago. Among the fourteen priests who concelebrated Mass, were Fr Tomás O’Connell, Adm (chief celebrant) and Archbishop Kieran O’Reilly, Archbishop of Cashel & Emly, both of whom paid tribute to the Monsignor in the church before adjourning to the parish centre where a hardworking group from the parish had prepared a reception for all.

His long time friend and fellow priest Fr. Christy O’Dwyer, AP Moyne, who spent many years with Monsignor in St. Patrick’s College paid a glowing, but humorous tribute to Monsignor, reminding us that his talents were not confined to matters ecclesiastical or in the lofty realms of Canon Law but were also of a very down to earth variety, fixing electronic gadgets, kitchen utensils, broken boilers etc!
Many of the speakers commented on his ability and his helpfulness, and in a humorous but respectful way, on his idiosyncrasies, indeed it was these little idiosyncrasies that were among the many traits that endeared him to all.