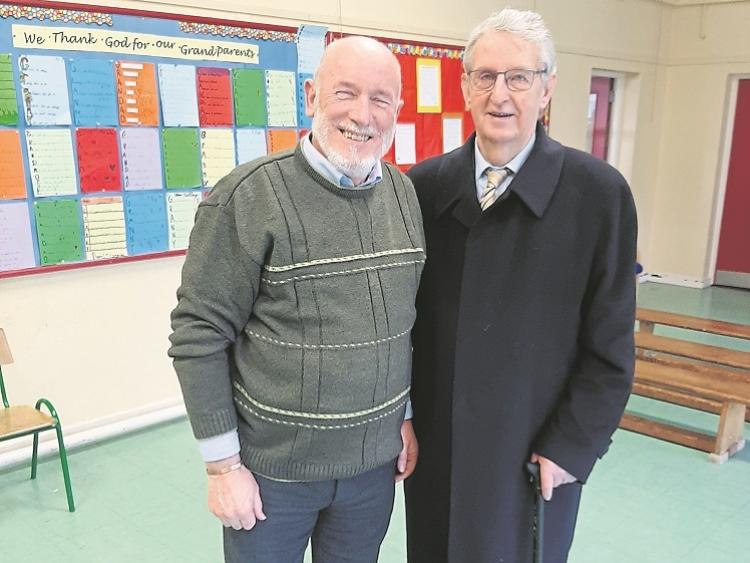 Timmy Delaney and Jimmy Finn catch up on old times

On Wednesday January 29 St. Colmcille's hosted their bi-annual Grandparent's Day celebrations. On what has always been a very well attended event in the school, Principal Conor Doyle and staff were expecting a large crowd to attend and were not disappointed.
With every available seat in the house occupied Mr. Doyle welcomed everybody in attendance and shared some memories of the special relationships he had with his Grandparents growing up and how he would have loved the opportunity to celebrate Grandparent's Day had it been there when he was in school.
With Grandparent's Day coinciding with Catholic School's Week Mr. Doyle then handed over to Fr. Conor Hayes who led all in attendance to a short prayer service. Our school choir under the stewardship of Miss Glennon and Mr. Derby contributed to creating a beautiful atmosphere throughout.
Following the prayer service Mr. Doyle invited Mr. Timmy Delaney, grandparent to Tadhg Kelly in 4th class, to speak about what life was like for him in his school days and what major differences he would see between then and now. The boys got great enjoyment from Timmy's account and were hanging off every word.
The celebrations progressed to the classrooms where the grandparent's got the opportunity to visit their grandson's room and share some special moments. The day concluded with tea, coffee and cake in the school where memories were shared and stories told. It was as ever a wonderful day and one which will remain a special memory for the students and their grandparents alike.