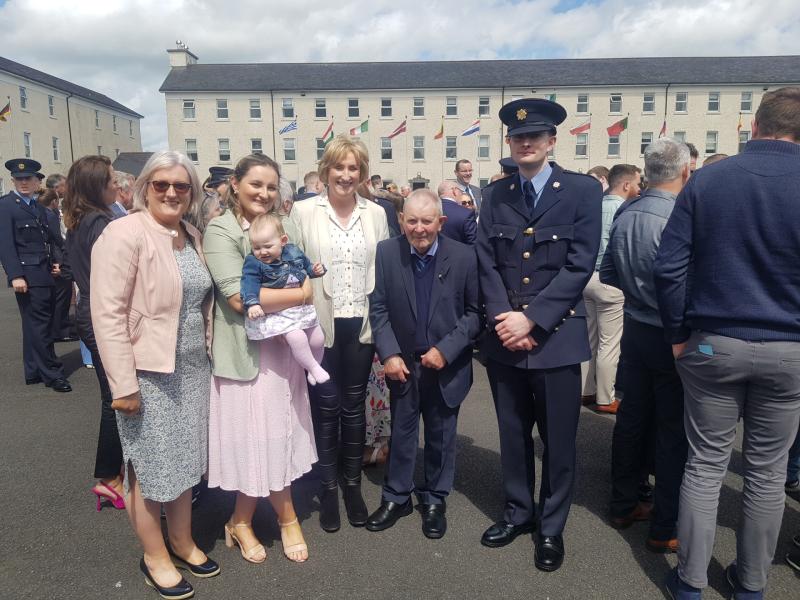 Templemore Garda Training College saw the first batch of new probationer Gardaí graduate today in over two years, with 38 women and 64 men donning the blue uniform of An Garda Siochána before Justice Minister Helen McEntee and Garda Commissioner Drew Harris in a Passing Out Ceremony.

The Training College, which forms part of the core of Templemore’s economy, had been effectively mothballed during the Covid 19 lockdown. Now, new life is being breathed back into the College: from next September, classes of 200 students will attend every 11 weeks, carrying through to the remainder of 2022, and into 2023 and 2024.

Templemore can expect a boost to the local economy as these trainees spend money locally in shops and restaurants.

“There’s a very considerable uplift in An Garda Siochána, up to 15,000, which can be achieved over the next 18 to 20 months,” said Commissioner Harris.

The new recruits hail from a diverse range of nationalities and backgrounds, including New Zealand, Angola, Croatia, Poland, the UK, Guatemala and Saudi Arabia.

Garda Bourke told the Tipperary Star that he was inspired to go into the gardaí as he always admired and respected their difficult work. “I was in the Order of Malta, and I’ve worked with youth clubs.”

A former Undertaker, Garda Bourke says he looks forward to the challenges ahead and “to give back to the community, and to make a difference in society, is something I really wanted to do.”

These members of An Garda Síochána commenced their Garda training in September 2021, during the Covid-19 pandemic and have undertaken a blend of on-line learning, on-site learning in the Garda College, and experiential learning in training Garda stations.

These 102 newly sworn Gardaí will now take on operational responsibilities.

Speaking at the Graduation Ceremony in the Garda College Garda Commissioner Drew Harris said, "The training to become a Garda is demanding under any normal circumstances. But undertaking the programme during the public health crisis will have made it all the more challenging for this intake of 102 trainees.”

"Each one came forward to pursue a career in An Garda Síochána at a critical and uncertain time so from the very outset they have shown their ability and commitment to protecting the public.

I admire their personal strength and dedication in seeing the programme through to today’s attestation.”

He added, "In An Garda Síochána, we know that being more reflective of the diverse and inclusive society we serve will enhance our ability to provide an effective police service for all people.

We have one of the highest levels of female police officers in Europe, but we recognise that there is still work to do.

We have to continue encouraging women and those from diverse backgrounds to join An Garda Síochána.  Close to 40% of the new Gardaí passing out today are women.  The 102 trainees represent 11 different nationalities including Saudi Arabia, Guatemala and Lithuania.

During our recent recruitment campaign, we placed huge organisational effort on attracting candidates from a wide range of diverse backgrounds.
We learned this month that over 11,000 people have applied to become a member of An Garda Síochána.”

"There are positive signs too in the fact that roughly 40% of applicants are women and there has been an increase in numbers applying across a range of ethnic backgrounds” concluded Commissioner Harris.

The allocation of Probationer Gardaí is initially to Training Garda Stations and also allows for consequential inter-divisional transfers of other members.

An Garda Síochána successfully completed a recruitment campaign on the 16th March 2022 receiving 11,075 applications.  Funding is provided to commencement recruitment of up to 800 Gardaí from this competition in 2022 and beyond.