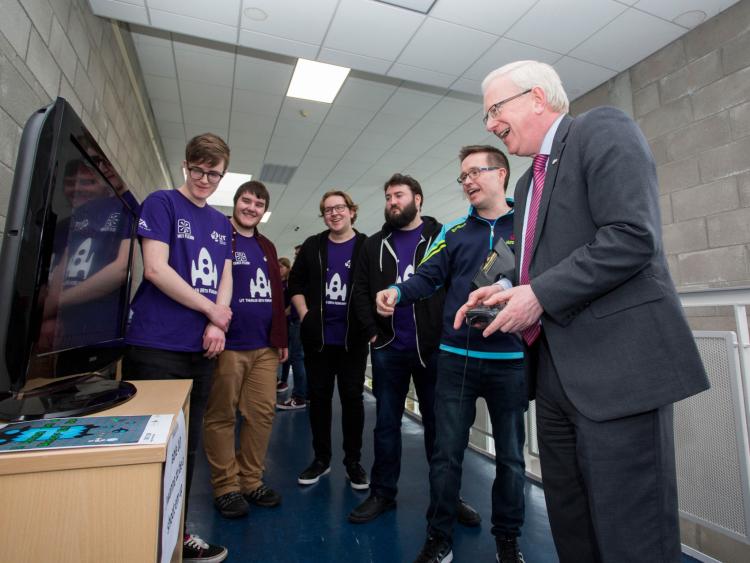 Prof. Vincent Cunnane, President LIT, has go of ‘I Wanna Be A Shoot 'Em Up’ which won Best in Team Performance, by LIT students Nathan Dunne, Luke O'Brien, Eoghain McGrath and Alexander McAllister

Over 300 people flocked to LIT Thurles this Thursday for one of the biggest ever Games Fleadh events hosted annually by the college.

The event, which has largely become known as the 'oscars' of the gaming industry, aims to recognise the brightest and best among the country’s student game developers, while also bringing together the collective knowledge of some of the leading names in the industry.

The event was originally scheduled to take place in February however organisers were forced to postpone the annual competition following Storm Emma in the interest of safety for those travelling to Thurles. But the change of date did little to deter the crowds who travelled en masse to the LIT campus with over 300 third level students, secondary schools pupils and teachers attending.

Four teams from LIT Thurles won major awards at Games Fleadh 2018 with 11 from the college’s B.Sc in Computing in Games Design and Development course recognised for their achievements in game design and development. Dundalk Institute of Technology eventually won out with its entry Robo Panda developed by students James Farrell and Caoilainn Hughes.

In all 26 teams took part in various game design and development competitions. The entries were viewed, played and tested by the public including the significant number of second level students and teachers who attended the event to learn more about how coding games will help them master the new Leaving Certificate Computer Science module.

At the end of the day long event IT Carlow Students Rafael Plugge Girao and Sebastian Kruzel were declared Game Studio College Champions with their entry Bullit.

Judges from EA Games, Romero Games and First Data reviewed all Game Studio entries and scored the students on their Shoot ‘Em Up inspired creations.

Speaking about Games Fleadh 2018, event organiser and lecturer at LIT’s Game Design and Development degree in Thurles, Dr. Liam Noonan said, “We had a fantastic line up of speakers from Romero Games, LIT, Microsoft Ireland, Entertainment Arts and First Data who offered valuable perspectives for students who are considering roles in the games industry. We were delighted and very proud with the achievements of all our Games Design and Development students.”