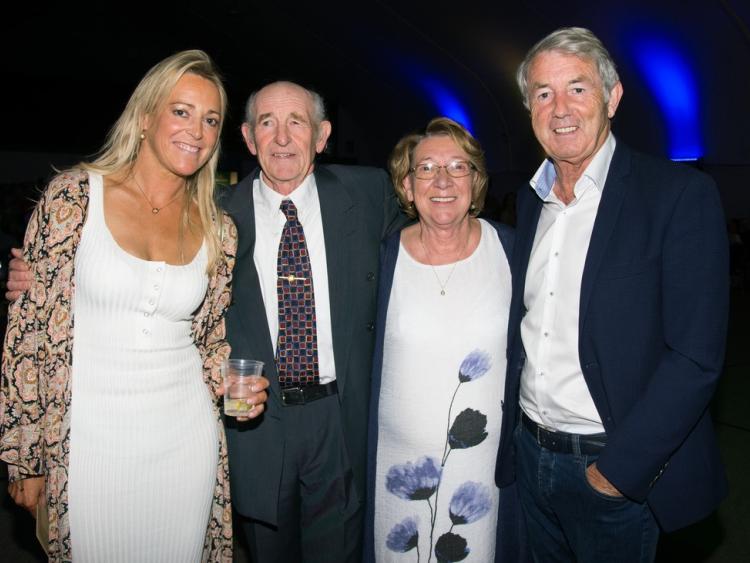 Angela Corcoran pictured with her parents, the McNeill's and Deputy Michael Lowry

The committee members are delighted to confirm that they have met and exceeded their initial financial target.

A variety of fundraising measures were successfully concluded in the run up the Jim Corcoran benefit night which was held in the Dome, Semple Stadium.

The committee members are delighted to confirm that they have met and exceeded their initial financial target. The committee were blown away with the generosity and kindness shown by the public and their expectations were surpassed.
On All-Ireland Final weekend, The Dome had a welcoming and friendly atmosphere decked out in the blue and gold lighting. It was all setup for a night of song and dance and the committee would like to say a big thank you to David Morgan and his team.

The stage was bright and illuminating ready for the musicians, thank you to the lightening and sound specialists provided by Simon and Lorraine Gleeson, Lumnatech AV.

Thank you to Paddy Loughnane, photographer extraordinaire, who brought a smile to many a person in the crowd as he took the photos throughout the night.

Johnny Looby was the M.C. on the night, you could hear the fun and laughter as Johnny and had great banter with the crowd throughout the night.
The entertainment commenced with the first of the local bands Mill Road, with James Butler on guitar and the sweet vocal sound of Ciara O'Brien they got the night off to a great start. Next up was Sam Rappaport & 5 Day - Sam sang and played the saxophone and had the place rocking.

This was followed by the familiar sound of traditional music by the one and only Jim O' The Mill Group. Erin Ryan recited “My Olde Ass” (The four legged type), as the crowd listened intently and erupted with mighty laughter.
The Doran Family took their place centre stage and the crowd were taken in immediately, James Doran played the Lonesome Boatman on the tin whistle and brought the sitting crowd to their feet in applause.

Next to take to the stage were Jim and Angela's neighbour and great friend, the character himself, Eoin Ryan and Seskin Lane who kept the crowd on the dance floor and played some of their own original songs including the anthemic Strawberry Medicine written by Eoin, the place was electric. Thank you to Eoin for liaising with the bands we could not have done it without him.

The night finished with well-known DJ Martin Maher on the decks, bringing everyone back to the days of youth with a set packed full of all the classics from the 80’s and 90’s.

The Committee Chairperson Theresa Corbett welcomed everyone to The Dome and spoke of her good friend Jim. Unfortunately, he was unable to attend the event on the night due to the intense course of treatment he is presently having. Jim remains positive and he is astounded, touched and speechless with the support from friends, neighbours and the community as a whole.

Jim's wife Angela attended the event and spoke on behalf of Jim and their children Charlie, Libby and Poppy, saying:
“As I stand here looking out at the crowd, I can see that the room is full of love and support for Jim and us. The community has come out in solidarity which Jim and we deeply appreciate and recognise this. The support given to us is above and beyond realisation.”

Fr. Celsus Tierney hosted the committee weekly meetings in The Parish House in Holycross in the run up to the event and Fr. Tierney welcomed the committee each week with open arms and a kind word, thank you Fr. Tierney. Thank you also to Catherine Clohessy in the Holycross parish office.

T.D. Michael Lowry and Councillor Jim Ryan were invited onto the committee for their support, direction and expertise which was invaluable and thank you both for getting involved in this fundraiser.
The tickets were designed by Vanessa O'Dowd and printed by AM Office Supplies, for which we were so grateful, Posters were designed by Raymond Corbett and outdoor signs by Brian and Graham of C.M. Signs and placed in key areas around the town by Martin Ryan and Willie Ryan thanks so much guys.

The Tipperary Star, Tipp FM and Tipp Mid-West radio handled the interviews with Theresa Corbett on behalf of Jim and Angela in a sensitive manner while advertising the event also, thank you.

The Committee were professional at all times, they were wholeheartedly dedicated and worked enthusiastically and tirelessly throughout, all on a voluntary basis without any hesitation. They were generously forthcoming with their ideas, skills, etc. while giving up their quality family time to make the event in The Dome and other activities a success. It was with great pleasure they did it in support of their great friends Jim and Angela.

The committee were overwhelmed with the local support from the people of Thurles, Holycross and surrounding parishes what tremendous communities, which we should be so thankful to be a part of. Well done to the all for giving the great support to this fundraiser for Jim, Angela and the children.

A big thank you to all those who donated spot prizes and items for the auction. Without your support the night would not have been the success that it was.
Thank you to all the people who attended on the night, and to the people who bought tickets but were unable to attend, we appreciated it so much. There was great work put in by Philly Mackey, Geraldine Healy, Margaret O’Brien, Statia Ryan, P.J. Boland and Pat O'Dowd in selling tickets door to door in Thurles.

There were a few ‘spin-off’ events which ran over the months of August and September of this year, starting with a car wash by Liam Carroll and staff of Spar Express, the Golf Links Road, Thurles. A Raffle on the August bank holiday weekend which were hosted at Supervalu Friar Street, Thurles and Dunnes shopping Centre for hosting the raffle.
An auction was held in the Mid-Tipp Mart of a limousine heifer, sponsored by Billy and Denis O'Callaghan. What a fun day, thank you so much and best of luck to Micheal Mullins & Associates who had the highest bid. The Mart also gave a generous donation.

Thurles Rugby club hosted The Wasted Summer Session last weekend where we had another great raffle. Thank you to Jane Ryan from The Source, who liaised with Thurles Rugby Club . We also have a GoFundMe page 'Jim Corcoran Benefit Fund', setup by Vanessa O' Dowd. Thank you to all who donated both to the GoFundMe and the credit union account.
The GoFundMe page continues to run all donations are welcome as the money raised is to support Jim in his ongoing programme of cancer treatment. Thank you to Lar Corbett and Kevin Coppinger for providing the GoFundMe tee-shirts which we wore throughout the fundraising events. Thanks a mill guys.

Jim, Angela, Charlie, Libby and Poppy would like to give a heartfelt thank you for the support, kindness, prayers and well wishes given to them throughout this journey.