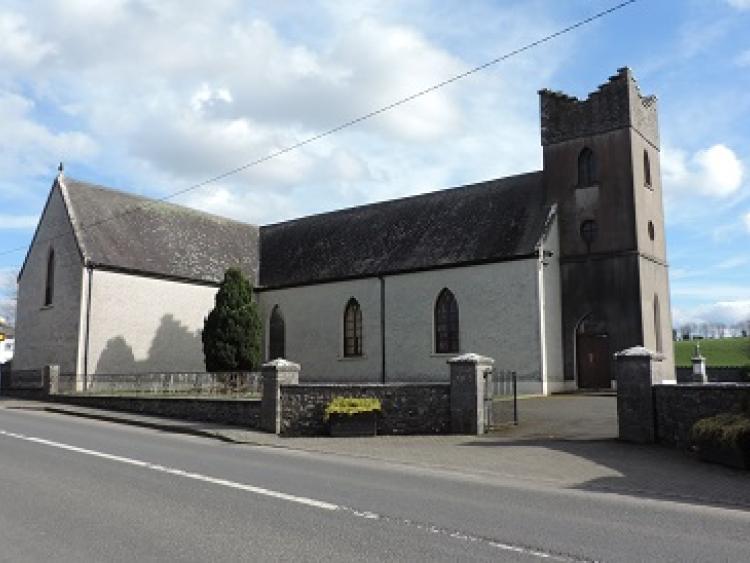 The present St Cataldus church was built over a penal chapel which had stood there since about 1750.

Back in the Spring of 2019 Tim Browne, Coolkill, Ballycahill highlighted to the local community that the church of St. Cataldus in Ballycahill would be 200 years old in 2020. If the stones in that building could talk what stories could they tell?

The present church was built over a penal chapel which had stood there since about 1750.
This original chapel was described by Archbishop Butler in 1754. Its stone, whitewashed walls were 7 feet high topped by a thatched roof in good order. The altar and its landing were made of stone. Two windows on the western end lit the sanctuary area.

The building ran east - west with the altar at the eastern end. When celebrating Mass the priest faced east towards the rising sun and Jerusalem.
The site for the penal chapel was given by Dr. Thomas Fogarty, of Garranroe (later Castlefogarty) at a time when the Penal Laws were still in force.

These laws were enacted against the majority catholic population and succeeded in reducing them to a state of being ‘helpless, ignorant, and poor, without the strength to rebel, or the hope of redress’. Any catholic church had to be away from the main road and could not have ‘on their churches steeple, cross, or bell’.

Thomas Fogarty’s grandnephew, Thomas Lenigan inherited Castlefogarty in 1788 and it was he who offered to extend the site and erect the church as we see it today. He generously funded the building project.

The structure was quite impressive for the time before Catholic Emancipation. It also had a bell tower with a bell at a time when it was still unusual to have either.
The new T - shaped church was one of the finest churches in the archdiocese at the time.

There is evidence that the nave of the present church was built on the walls of the original penal chapel.
This connection with the past joins us with the generations who worshiped here in times of persecution, poverty, famine and war. It is only fitting then that the work and faithfulness of these generations would be suitably commemorated.

The Bicentenary Committee put together a programme of redecoration of the church and ceremonies to mark the occasion. The interior and exterior of the church were to be painted. The beautiful timber altar was cleaned and the gold trim needed touching up.
But, the Covid-19 pandemic hit and while a lot of the work is almost complete, the remainder has to wait until restrictions are lifted.
The big celebration was scheduled for Saturday last May 9. This was the eve of the feast of St. Cataldus, to whom the church is dedicated. Events included a pilgrim/historical walk around the village in the afternoon, followed by Mass in the church with Archbishop Kieran O’Reilly as the chief celebrant.

Following that there were to be refreshments in the Community Hall where a commemorative booklet was to be launched. Everything has been put on hold.
It may be May 9 2021 before all this can be realised. ‘What’s Another Year?’

When it is safe and allowed the faithful people of Ballycahill and all those connected in any way with this wonderful place of worship will enjoy a gathering worthy of the occasion.