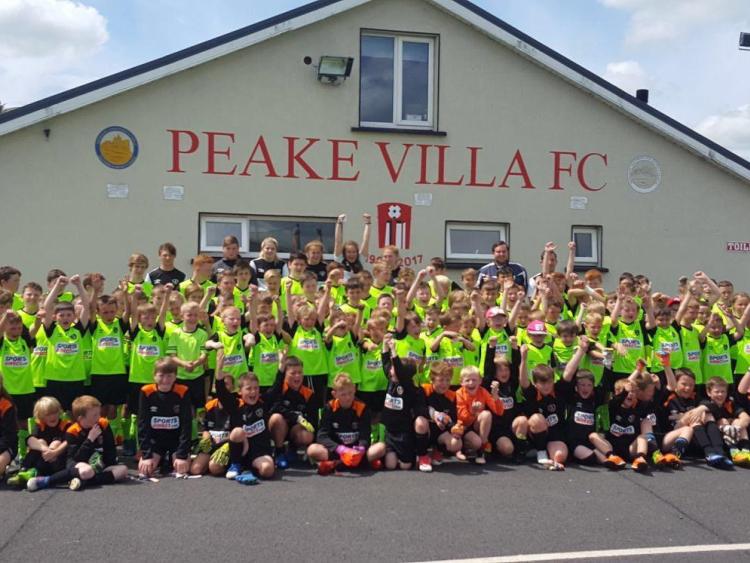 Peake Villa FC is planning for the future

Peake Villa FC is fortunate that down through the years the community continues to play a major role in the operation of the club with multiple generations becoming coaches, players, and administrators of the club.

There are multiple committee members, players and coaches who have had family members involved with Peake Villa through out the last 50+ years, for example our current chairman Seamus Woodlock was first a player, then a coach and is now a long serving administrator of the club who is guiding the future development of this community based soccer club.

The Peake Villa committees (past and present) are justifiably proud of the improvement works undertaken down through the years at the Tower Grounds in Loughtagalla, Thurles.

1999: Development started with the committee of 1999 having the foresight to purchase the Tower Grounds. The site had been leased for several years and consisted of two playing pitches and a training area.

2006: The club built a club house, which has two Dressing Rooms, Referee Room, Kitchen and Meeting Room.
2009: Upgrade works were completed, including the all-weather training 80m x 40m Astro Turf pitch, the Club received a National Sports Grant to cover 50% of the cost.
2014: Peake Villa acquired the Bowling Green land on the left-hand side of the club to allow for further expansion of playing facilities.
2015: The club secured a National Sports Capital grant to cover 50% of the cost of levelling the Main Pitch.
2016: The club secured grants from Tipperary County Council, the FAI, the Tipperary Southern & District League to help cover 75% of the cost of putting tarmac on the front of the club house carpark.
2017: The club secured a National Sports Capital grant to erect a perimeter fence as required by planning to protect the Peake Villa owned Tower Grounds.
2019: The club identified the need for the Academy to have its own pitch, which would be used for Academy training and games. With this aim in mind, the club secured grants from the National Sports Capital and Tipperary County Council which enabled us to level the old side training pitch and install fencing around the pitch, which will now be called the Bowling Green. 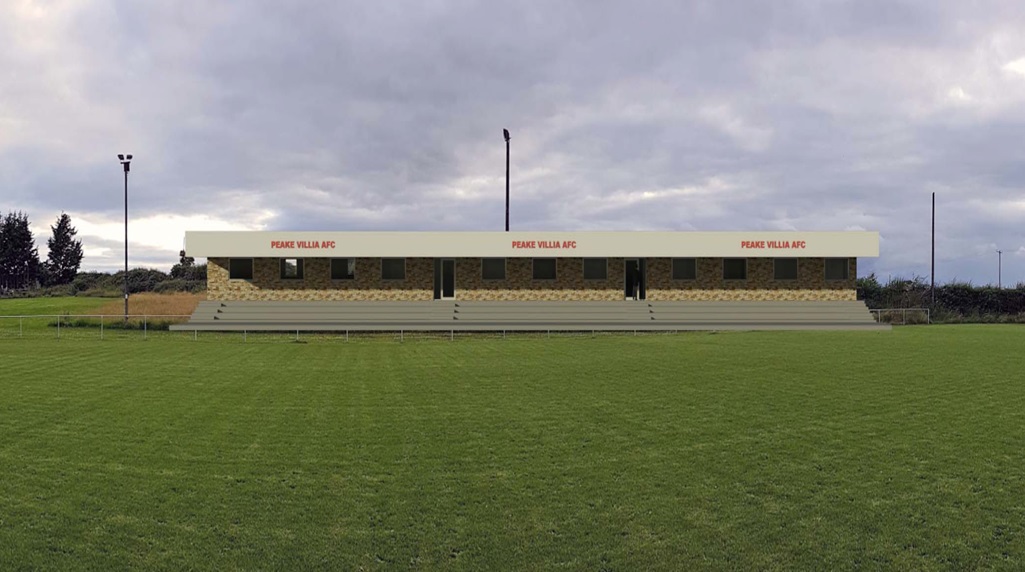 An impression of the proposed new stand and dressing rooms

#We have constructed a pitch designed to handle all Academy needs to help develop the future players for the club.
In addition, to accommodate the growth of the girls’ soccer game within the club, the club identified the need for additional dressing rooms. The delivery was taken in April of the new cabin which is currently been furnished into two dressing rooms to be used to meet the needs of girls’ soccer squads.

The club strives to achieve a high participation rate within the community and this we have achieved through the following activities:
Our Astroturf is available for hire 7 days a week and quite a few different groups hire the facility on an hourly basis to play a 5-aside or 9-aside game of soccer. Bookings can be made with Michael Cleary – see website for contact details.
The facilities and playing pitches are used regularly by the local schools. Thurles Presentation Girls, Thurles CBS Secondary Boys, LIT College and Colaiste Mhuire Community School.
Our boy’s academy on Sundays (110 players).
Our girl’s academy on Saturdays (40 players).
School Boys teams from u10-u16 (200 players with 15 teams)
School Girls team u10-u18 (80 players with 5 teams)
Adult Soccer with our Junior A and Junior B squads (45 players).
Youth Soccer (24 Players)
Ladies soccer (starting 2020).
Our Annual FAI summer soccer camps.
Our Easter Soccer Sisters Camp for girls.
Hosting of the Tipperary County Community Games soccer matches
Hosting of matches for the Munster Schools Boys and Girls competitions
The Facilities are used by the FAI Regional Development Officers to run FAI coaching courses and ETP matches.
The club is extremely proud of the high level of soccer activity that takes place on a weekly basis and this enables Peake Villa to give back to the community via the community’s access to the soccer facilities.

Peake Villa FC is committed to high standards and achievement in all that it does. It is constantly upgrading its playing and other facilities and has in place an ambitious 10-year plan which will be completed with the support of the FAI, National and Local Government, and the Local Community. We are currently in year 8 of the plan and the following projects are in the pipeline for development:
Over the next twelve months, the club has plans in place to:
Convert the new cabin into two dressing rooms.
To install floodlights on the new Bowling Green Pitch, to facilitate training during the winter months.
To level the Top Pitch to bring it up to the same high standard of the other two pitches
The building of an equipment shed as per the guidelines of our 10-year planning permission.
The final jewel in the 10-year plan is the building of a new Club House with a stand incorporated beside the main playing pitch. This would include 4 dressing rooms, two referee rooms, a physio room, a first aid room and toilets. (see pictures). The club has secured planning permission and the next phase is to seek quotations for the building costs. Once the committee has established the costs the next phase will kick-start the fundraising effort to raise the funds. The new club house and stand is of the required UEFA standard to enable the club to host school’s inter-county, regional and youth international matches.
The current committee are all ambitious to get the planned development works completed in as short as time that is possible. This will be achieved with the support of the four main cogs that keep Peake Villa running:
The Thurles Community
The Local Business Community
The National and Local governing bodies that provide grant assistance
The players, coaches and volunteers
With over 500 children participating annually in all our soccer teams, this results in large amounts of people in the surrounding community having links to Peake Villa FC. The club wishes to acknowledge the many contributions and support received from the community, without which the club would not have been able to build the top-class facilities that we now have at the Tower Grounds.

Peake Villa acknowledges the sponsorship received over the years from the local business community which have enabled the club to provide our teams with top-class playing and training gear. The business annual contribution is recognised on our website with a list of all contributors and throughout the grounds the signage of the local business sponsor is also on display.
Peake Villa acknowledge the grants received down through the years from the National Sports Capital, the Tipperary County Council, the FAI Club Development and the Tipperary Southern & District League that contributed handsomely towards the cost of each project and will continue to support future projects.

Finally, Peake Villa acknowledge the players, coaches, parents, and volunteers that have contributed greatly to the development of the club. No club can ever have enough volunteers, so if you have time on your hands and would like to assist at the club in fund-raising, coaching or club administration please contact any member of the committee and introduce yourself. Club contact details on our website www.peakefillafc.com.