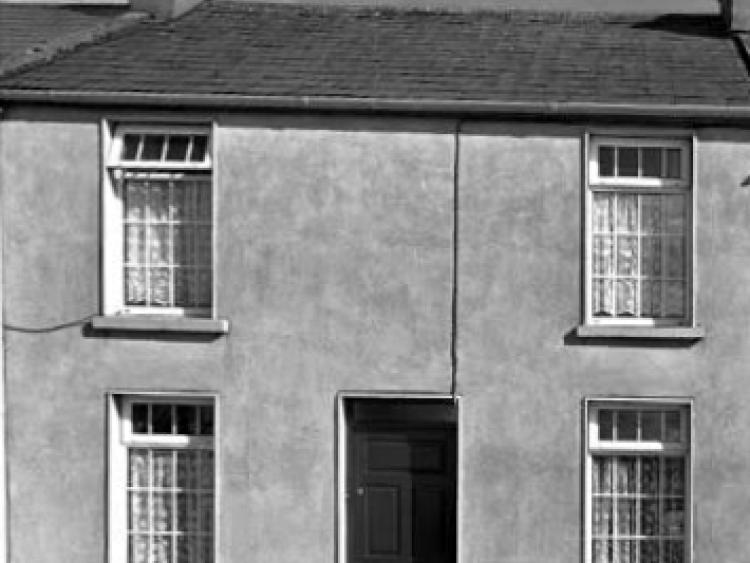 Willie Loughnane was shot dead as he slept in his bed at home, with his parents downstairs and his brother pleading for him

During the Irish War of Independence from 1919-1921 a lot of atrocities occurred throughout Ireland, which left a mark on generations of Irish families that followed. One such atrocity was the shooting of William Loughnane on the March 9, 1921.

William (Willie) was born in 1897, in the Furze area at the top of Loughtagalla, Thurles. He was the second youngest child of Patrick Loughnane and Bridget Burke. William was schooled with the Christians Brothers and after leaving school, worked as a general labourer with Leahy Brothers in Thurles.

William joined the Local Volunteers (IRA) in 1917, and like his older brothers, he served with A Company, 1st Battalion, 2nd Tipperary Brigade, Thurles area. He was as a Section Commander and Drill Instructor and was also part of an intelligence circle within the Thurles Volunteers (IRA). William was on active service with his older brothers, against the Crown Forces and he took part in many raids on R.I.C. Barracks, ambushes and raiding for weapons in Thurles and further afield. He spent a period in jail in 1919 for the alleged assault on a R.I.C. officer named Stephen Barrett. 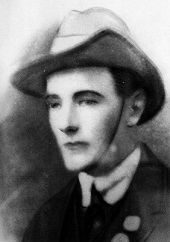 William Loughnane had evaded capture on a number of occasions by the R.I.C. and was on the run for nine months, which frustrated both the R.I.C./Black and Tans within Thurles. The following is from the Irish Independent: “A force of police under Mr. Hunt D.I. surrounded the premises of Messrs Leahy, Brothers Thurles, to arrest Mr. William Loughnane one of the employees, who is a volunteer drill instructor. He escaped from the premises and was pursued by the police cycles and runners. After an exciting run he got to the banks of the river Suir, and plunging in got across the river and safely away.” (Irish Independent June 1918)

William’s life was cut short on March 9, 1921, at the young age of 23 years, when a number of masked and armed men entered his parent’s house in Quarry Street (Mitchel Street), and shot him a number of times as he lay in his bed. While under the cover of darkness, the Crown Force Murder Squad moved silently and quickly as they made their way along the darkened street, which they had entered from the Cathedral Street side of town. Their sole intention was to assassinate Willie Loughnane.

It was a well-planned operation, led by the R.I.C. within Thurles, who had gathered information on their target. They also had an informer, who had helped them to identify the Loughnane household, as there were a number of Loughnane families living along the street. They wanted to be sure they had the right family on that night. If they had raided the wrong house, the element of surprise would have been lost, and their intended target might have escaped.

It is believed that the Murder Squad had a list of names and addresses of the local volunteers (IRA) and Sinn Féiners who were to be assassinated on that night. Willie’s name was on the list, as he and his brothers were a thorn in the side of the Crown Forces. The Loughnane family were involved in the training of the local volunteers (IRA) and organising safe houses and the distribution of weapons.

As the Crown Forces Murder Squad moved along Quarry Street (Mitchel St.) they stopped at a number of houses, and examined the window frames with their flashlights. They were looking for a marking left by the informer, which would identify the home of the Loughnane family that they were seeking. The informant had scrawled the initials “WBL”, which stood for “William Burke Loughnane” on the window frame. This was how the Murder Squad were able to identify the home of William.

In their haste, and due to the darkness of the street, the Murder Squad at first banged on the door of Willie’s brother, Edward Loughnane, who lived two doors up, and demanded entry. Edward’s wife, refused to open the door to allow the intruders in which probably saved the life of Edward, who was also a volunteer (IRA). When the Crown Forces Murder Squad finally identified the right house, they banged on the door and shouted “open up open up.”

According to a neighbour who lived next door to the Loughnane’s; “I can still recall the night Willie was shot by his assassins and of my parents going into Willie’s house, to say the rosary with his parents and family, as Willie lay dying. I can recall being awoken by loud banging and shouting on the street outside, and the men were shouting “Open up! Open up!” and then I heard the sound of loud bangs going off in the Loughnane’s house. I also recall my father saying that “a terrible deed has been done to the Loughnane’s! Stay inside the house and be silent as we are going out to say the rosary.” (Maryann Carey)

The Loughnane family had been raided on a number of occasions before, by both the R.I.C and Black and Tans, in search of weapons and incriminating documents. The family thought it was just another raid by the police. The father Patrick Loughnane snr opened the door, as he did so, he was pushed violently down the hallway into the kitchen by a number of masked and armed men. Other family members were shoved into a corner of the kitchen, and an armed intruder stood guarding them. The other armed intruders searched the house for William.

On finding William in the bedroom along with his brother James, they ascertained William’s name and shot him a number of times, leaving him for dead. His older brother, James, tried to stop the assassins from killing William; James threw himself over his brother and pleaded with the assassins to take his life instead. The assassins pulled James off his brother and forcibly held him down, while another proceeded to shoot William a number of times, two bullets entered the heart, one in the neck and one in the temple. James was covered in blood but unharmed, as he watched his younger brother dying in his arms.

William’s mother went to the window and shouted come back here you murders. The murder squad turned and fired a number of shots at her, missing her by inches. The next day a number of RIC arrived at the Loughnane house, to question them. Patrick Loughnane snr refused them entry and blocked their way. A standoff ensued on the street, between the Crown forces and the Loughnane’s. After a parley two police were allowed to enter to identify William’s body. 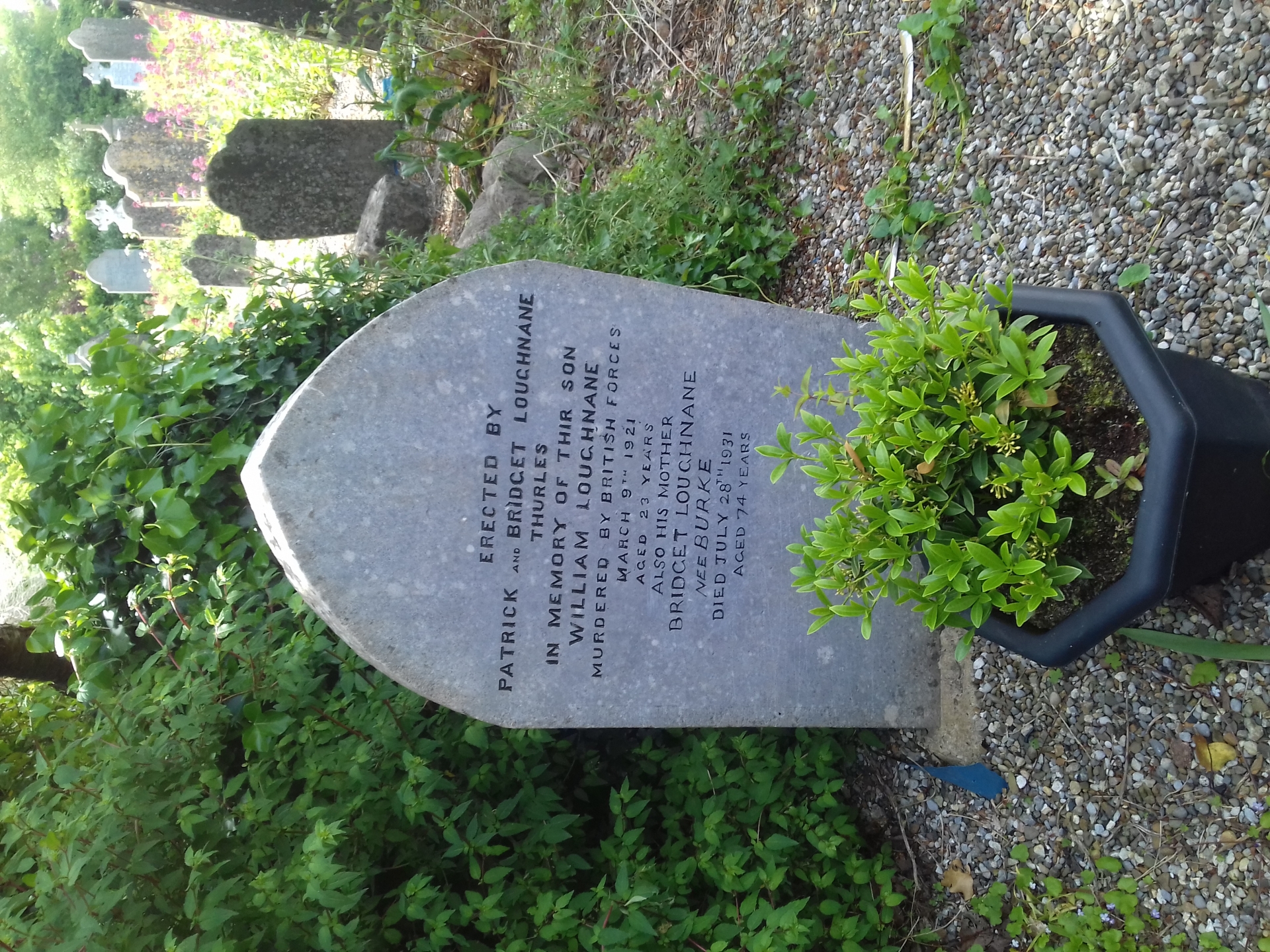 The following is a piece taken from the Freemans Journal: “Police arrived at the house of Mr. Loughnane, Mitchel Street, for the purpose of making investigations. A scene ensued. The father of the deceased barred their way, and declared that no policeman would be allowed to view the dead body of his murdered son. “Ye know well who did it,” he said. “You will have to clear out of my house.” Other members of the family came on the scene, and after some parleying it was agreed to permit two policemen to enter”. (Freemans Journal 1921)

The military court of inquiry into William’s death was held on March 18, 1921, at the military barracks Thurles. The verdict was, “Death caused by shock and haemorrhage from gunshot wounds that such person or persons unknown are guilty of wilful murder”. (Court of Inquiry 1921).

William’s remains were laid out in the Cathedral alongside Laurence Hickey’s, who was also murdered by the Crown force murder squad on March 10. On the day of their funerals, a large crowd of mourners packed the church and lined the streets. All shops were closed and shutters drawn as a mark of respect. There was a large military presents who set up a machine gun post on the Suir bridge facing the Cathedral and another post across from the church and another just below the Presentation Convent.

The RIC/Black and Tans patrolled the street outside the church intimidating the mourners. The military would not allow the remains of William Loughnane to leave the church until the Tri-Colour was removed from his coffin.

The military demanded that the family would have to travel in vehicles, to the graveside a few hundred yards away in St. Mary’s. The military also stopped hundreds of mourners from following the cortège to the graveside to pay their last respects.
It was such a tragic end to the life of another young volunteer (IRA), whose life was cut short, because of the sacrifice he had made for Ireland’s freedom.