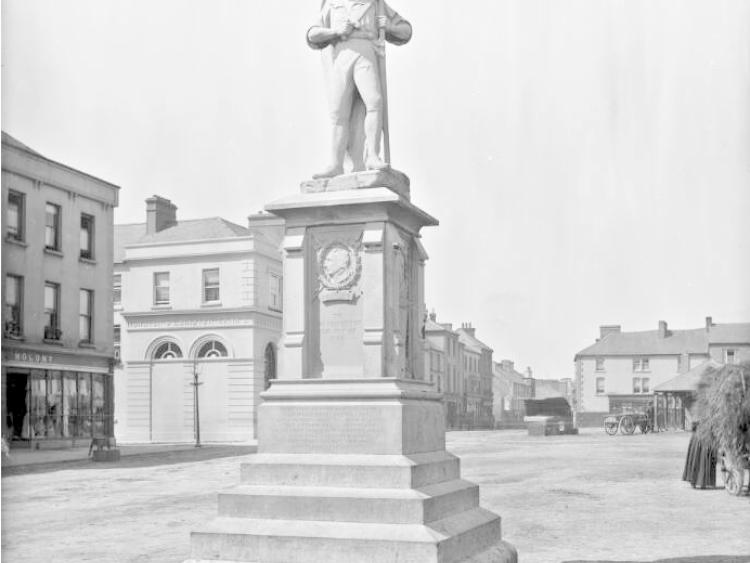 Liberty Square and the 1798 monument

A piece of local history

On March 10, 1921, the Crown force murder squad went on a rampage in Thurles. They visited houses with the intent to murder those within.

One such house, was that of Laurence Hickey who was a shopkeeper/Publican at no. 25 Main St. (Liberty Square) Thurles.
Laurence (Larry) Hickey was born in Derricknew, Killenaule in 1880. His parents were John Hickey and Margaret Duggan. Laurence came from a farming background and he worked as a farm labourer, on his father’s farm at Derricknew before coming to live in Thurles. He set up business at 25 Main St. (Liberty Sq.) as a shopkeeper/publican.

Laurence married Anne Gannon from Cooleeny, Moyne and they were married in Moyne church on October 11, 1916. Laurence and Anne lived in Main St. Thurles and were happily married, until tragedy struck in 1918. They were both looking forward to the birth of their first child. But sadly, Anne died from complications due to childbirth on November 2, 1918 at the age 38 years, just two years into marriage, leaving Laurence a widower. Two years later Laurence met and married a Catherine Maher from Turtulla, they were married in Moycarkey Church on August 10, 1920.

Laurence was a Sinn Féiner and a true nationalist, who believed in the struggle for Irish Freedom. His premises were used by the local volunteers (IRA) for meetings.

His wife Catherine became pregnant in late 1920 and both were looking forward to the birth of their child. But sadly, again tragedy, was about to strike the Hickey family household for a second time.

The murder squad banged on the Hickey’s door awakening members of the household. Larry’s wife Catherine came down to open the door and when she saw the masked men, she pleaded with the intruders not to take life. She pleaded please do not take life; she said that she would give them money, but please for God’s sake don’t take life.

The murder squad ignored her pleas and pushed her aside and knocked the candle from her hand. Also, in the house on that faithful night was a servant girl named Ellen Darcy- it is also believed another girl by the name Katie Cahill was present. It’s believed that the two girls were brought outside to the yard in their night attire and made stand there, traumatised by the whole event that was unfolding in front of them.

The murder squad went looking for Laurence (Larry) when he appeared at the top of the stairs. The intruders ran up and grabbed him, and after asserting his name they pushed him down the stairs. They then dragged him along the hall towards the back of the premises and shot him a number of times.

Catherine Hickey was a couple of months pregnant at the time of the murder, she was also pushed and held up against the wall by the murder squad. She watched her husband being murdered in their own home, right in front of her eyes on that frightful night March 10, 1921.

The inquiry into Laurence’s death took place at the military court in the barracks in Thurles on March 18, 1921.
The verdict is as follows, “death caused by shock and haemorrhage from gunshot wounds that those person or persons unknown are guilty of wilful murder”. (March 18, 1921)

On the day of Laurence’s funeral, hundreds of mourners packed the church and hundreds more lined the street outside the Cathedral. Requiem Mass was been offered for his soul and for the soul of William Loughnane who was shot on March 9 at his home in Quarry Street.

Archbishop Harty presided over the mass and asked those in attendance not to seek revenge for the killings. He prayed that Almighty God would protect Thurles from a repetition of such frightful scenes.

Outside the church was a large military presence with machine guns positioned along the street and R.I.C./Black and Tans heavily armed patrolling and imitating the mourners in attendance.

According to the Nenagh Guardian “Laurence Hickey of Main Street (Liberty Square) Thurles was shot by armed and masked men on March 9 1921. At around mid-night five armed and masked men carrying revolvers banged on the door of Hickey’s premises which was opened by his wife. They pushed her aside and knocked the candle from her hand, she pleaded with them saying that she will give them money but do not in God’s name take life.

Her husband appeared on the stairs and the masked men rushed towards him. Are you Laurence Hickey? they asked. When he replied he was, they pushed him into the hall and shot him in front of his wife and their servant Ellen Darcy. Fr. Maher administered the last rites to Mr. Hickey who had expired on the spot.” (Nenagh Guardian)

Another account of this shooting is recalled by Commandant Jerry Ryan in the archives of military history.

According to Ryan’s statement “Five masked and armed policemen raided the house of Larry Hickey, publican, Main St., Thurles, when they found the owner in bed. He was ordered out in his night attire and when he reached the head of the stairs he was tripped and thrown downstairs by an R.I.C. man named Jackson. In the fall, Hickey's neck was broken and he was in great pain at the foot of the stairs when Sergeant Enright, who was in charge of the raiders, shot him dead, to put an end to his agony. Hickey was a well-known republican in Thurles, and a detailed account of his shooting was given to me during the Truce period by Sergeant Enright himself.” (Bureau of Military History)