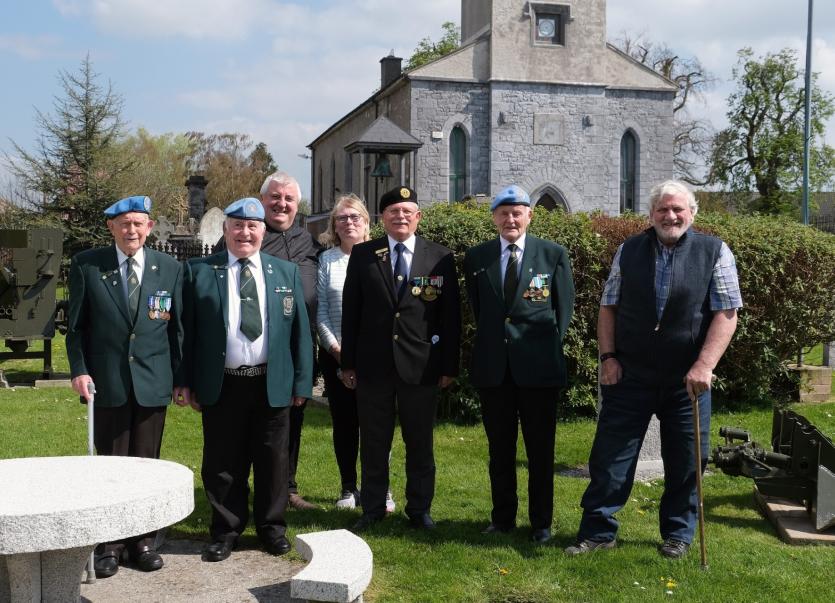 Jim was very proud to be associated with all ceremonies that took place in St Mary's Garden of Remembrance  over the last 21 years.

“Jim was a very good friend to me and the Memorial Committee as he was to everyone who had the privilege to meet him. Jim had a great affection for St Mary's International Garden of Remembranceand and for what it stood for in relation to remembering all who died in all wars in the service of peace at home and overseas; all our local and national heroes and some international; all remembered with dignity and pride,” John Wort said.

“Jim was very proud to be associated with all ceremonies that took place over the last 21 years .It was right and fitting that a remembrance ceremony would take place to coincide with Jim's burial,” he added.

On the day four flags were flying -the Irish flag at half mast and at full mast the United Nations, the European and the Lebanese .

John Wort got the ceremony underway by welcoming Jim's friends to St Mary's and outlined a short history of Jim's involvement with the Durlas Eile Eliogarty Memorial committee and for what Jim had achieved in his life time as a good friend and his love and compassion for his fellow man .

“Jim was a man of many talents, a man who stood and who was not afraid to get involved or to speak out when he had something to say,” John said.

Mr Paddy Skehan, President of North Tipperary United Nations Veterans Associations Post No 18, a very good friend of Jim's for 40 years and he a veteran at the young age of 96, paid tribute to Jim's kindness to others, his involvement and respect to all who knew him.

Paddy talked at length for twenty minutes about his friendship with a gentleman a friend and a comrade.
Mrs Bridín O' Gorman recited a decade of the Rosary followed by one minutes silence . The Last Post and reville was played as the Irish flag was raised to full mast .

On behalf of the Durlas Eile Eliogarty Memorial Committee we wish to extend our condolences to Jim's wife Emby ,sons PJ and Michael , daughter Mary, daughter in law Mary, son in law Mathew,nieces, nephews, and Jim's extended family May you rest in peace Jim and may the light of God shine on you and your family.