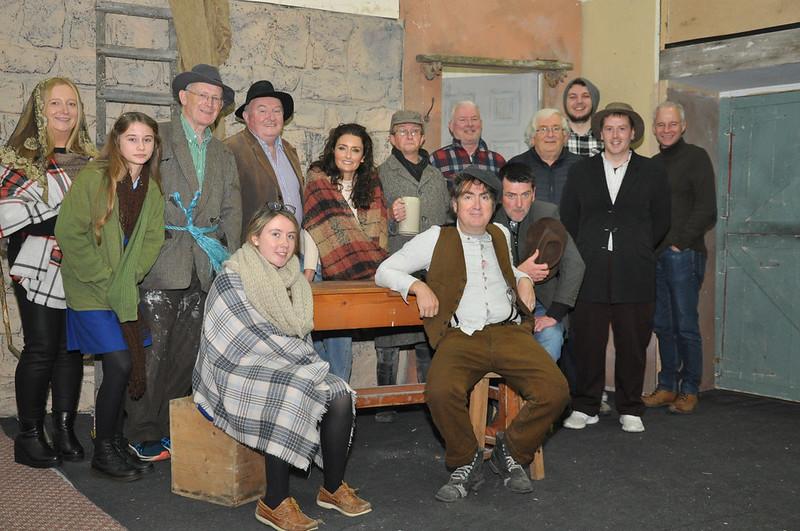 Monday November 15 -the opening night  -will be a fundraiser for the Thurles Lions Club Stanwix Homes Project which is currently underway at the site of the Widows Home near the Anner Hotel.

As with every show, there is a lot of people required to make it a success and with a large cast on stage too, it stretches resources to the limit. In addition, it is our first play since early spring 2020, which was cut short because of Covid, so finances are also limited as the group are non-profit making so all proceeds go into the next show.

Challenging times indeed but many have experienced worse in recent times. This is a chance however to put the last 18 months behind us, get out and see some theatre and enjoy an entertaining evening with Thurles Drama Group.

The Playboy centres on the romantic intrigue that takes place between Christy and Pegeen, but it has a cast of characters that feed this story with great relish and hilarity. Shawn Keogh (Patrick Nolan) loves Pegeen too and has plans of his own that keep being thwarted by Christy when he arrives. He seeks the help of the Widow Quinn (Sinead McGettrick) to hatch his plans and between them they create some wonderful moments in the play.

The Widow, always on the lookout herself even takes a shine to Christy to add to the plot. Then there is Old Mahon, Christy’s father (Flan Quigney) who turns up alive and well and all the best laid plans of the other characters are thrown into turmoil.
Old Mahon, like the Widow and Shaw Keogh are stock comic characters and you always know that their plans will not end well for Pegeen or Christy.

Johnny Fogarty plays Pegeen’s father, Michael James Flaherty and while he loves Pegeen dearly, he is a businessman first and foremost and sees Christy as a great celebrity who might even make him rich! These are very experienced members of the group and know how to play up a part to make the most of the plot and the comic moments that naturally arise.

The play also has a number of smaller parts as locals wonder into the shebeen to complicate the plot or simply satisfy their insatiable curiosity. These include Tommy Kennedy as Philly Cullen and Pat Loughnane as Jimmy Farrell and neighbours, Denis Slattery and Alecks Barons. The widow also has a few accomplices to support her schemes including Adie Bourke as Sarah Tansey, Aine McElgunn as Sarah Brady, Rosa Tynan as Honor Blake and Lily Nesbitt as Nellie.

The director Liam Ryan is also using live music for the show provided by Sean and Lily Nesbitt. A rich tapestry of characters then to add to the madness and tomfoolery.

The opening Night will be a fundraiser for the Thurles Lions Club Stanwix Homes Project which is currently underway at the site of the Widows Home near the Anner Hotel.

Tickets for opening night are available for €20 including a cheese and wine reception at 7 15pm. Tickets can be purchased from members of Thurles Lions Club, Thurles Drama group and at The Source Box-office. Tickets are selling fast for this great show so don’t delay.