The launch saw people come from far and wide to celebrate 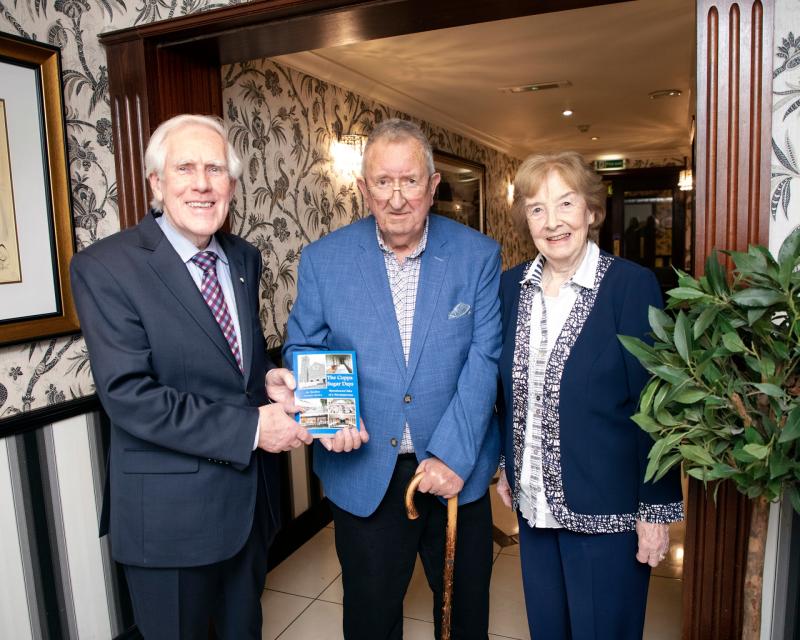 “A Lovely evening among true friends” was how Thurles journalist /author , Tom Ryan described the launch of his fourth book, ”The Cuppa Sugar days-warmhearted tales of a newspaperman” by Dr Labhras O’ Murchu, Director General of Comhaltas Ceoltoiri Eireann at a convivial and charming night of celebration in the Anner Hotel, Thurles.

And, Tom’s friends from Roscommon to Rathdowney and from Galway to Waterford and from many parts of CountyTipperary, were there to either entertain guests or support the best sellingThurles newspaper man and author.

The popular poet ,the late Geraldine Cummins, Mitchel Street, Thurles, who died in March this year was commemorated by the reading of her poem, ”Light “, by multi -awards winning Celbridge poet, short story writer and dramatist, Cathy Conlon, originally from Coolquill, Killenaule who grew up in The Commons. She was accompanied by her husband, Tommy.

Unassuming Cathy, a friend of Tom Ryan, also read from her own works. Geraldine’s sisters, Aideen O’Sullivan and Norma Cummins, represented the Cummins family at the poetic tribute on the night. Also present for the unique tribute to Geraldine were the poet’s dear friends, Paddy Hanafin and Joe O’ Connell.

Above: Tom and his brother Pat pictured with Cllr Jim Ryan

Tom’s “Cuppa” is dedicated to his late wife, Ina, his working partner for 42 years and Tom and Ina’s friends, Dylan Kennedy and Jenny Fennessy of the Red ’n Blue Theatre Company, came from Waterford as a gesture of solidarity with Tom and to pay tribute to Ina who, like Tom, hugely respected the talented and great hearted thespians of the Deise.

Jenny is star of the hit BBC TV series, Call the Midwife and she must have been popular among the nurses present for the glitzy social occasion. There too, was former “Indians “ showband drummer, Chris Mullahy and his charming wife ,Kathleen, who now live in Kickham Street, Thurles. The duo enjoyed craic and chat with EileenFinneran, Galway, KathleenO’Mahony, Castleiney and Mary Finn, Rathdowney.

The Master of Ceremonies, multi- talented Mick Creagh from Rathdowney, proved himself a top showman by taking on the additional role of entertainer in place of a number of acts unable to be present due to illness.

Top Tipp vote getter , Michael Lowry TD was unavoidably absent having to go abroad at short notice but sent a message congratulating Tom on “another beautiful production.” He commended Tom, not only on his literary skills but also his courage and determination in completing such a challenging task.

IndependentCouncillor Jim Ryan was there and he is of course associated with many entertainment events inThurles. Top recording artiste, PJ Corcoran, Loughmore and his lovely wife, Sadie, were there and PJ sang three songs backed by KennyRyder. So too was Hannah Costello, The Ragg, sister of former Tipp senior hurling goalkeeper of Thurles Sarsfields, Jimmy Duggan and with Hannah was her sister, Esther Duggan, Holycross.

Nurses present included Helena Ryan, Athnid and Theresa Bannon, Cassestown. Retired Tipperary Star journalist ,the amiable John Guiton, was there and barrister, Sean Deegan who entertained the Nenagh contingent with a wealth of fascinating stories. Sean, who supports almost all Thurles cultural functions is a former Thurles Urban District Councillor and is now in Rochfordbridge County, Westmeath. He is a former Tipperary Star Dublin correspondent- he wrote a weekly column about the Dublin Tipps for years. Blogger actor, photographer and multi- talented George Willoughby of Thurles Information renown popped in to congratulate Tom and buy his book. 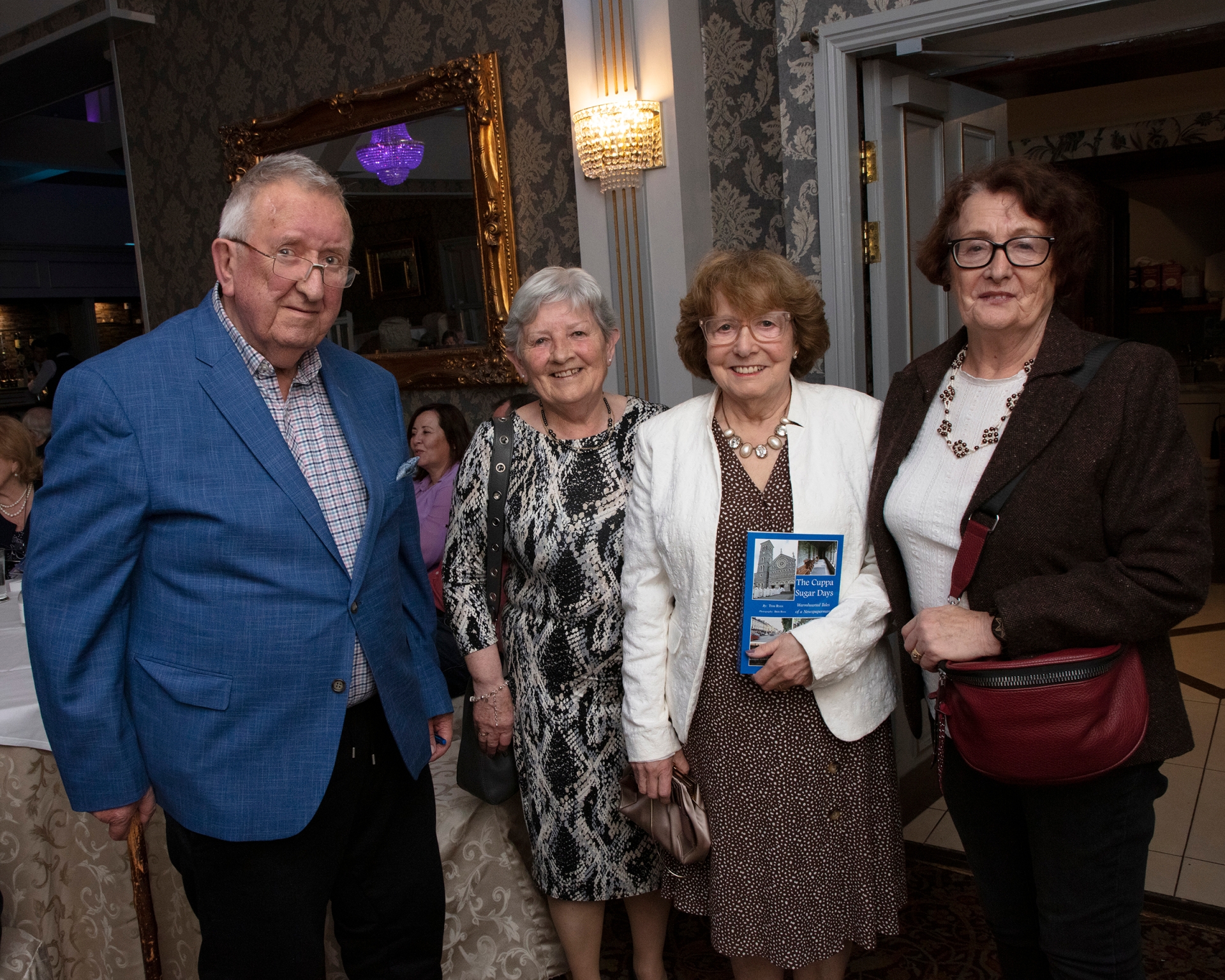 Above: They came from near and far for Tom's  book launch

Equestrian enthusiast , Vern Carroll of Borroway was enjoying the scene with Thurles club for Dancing personality ,Tom Gleesonand Seamus O Driscoll of the Mill Road Garden Centre , brother of the late great poet and friend of Tom , Dennis ODriscoll . Tom Healy , one of many people with Coolcroo links, and also well known in the entertainment industry and in athletics circles was with his charming wife, Aileen.

From Nenagh came Tom Ryan’s first cousins, Noreen Horrigan, and her son Martin- an ex-Irish Army soldier who served overseas Martin was accompanied by his beautiful wife, Margaret . There too, was Nancy McCormack Cloneybrien, Portroe -Noreen Horrigan’s sister and a great entertainer also.

Dermot Freeman, whose brother, John died just before publication of Tom’s book, was on stage in the best traditions of showbiz and won rapturous applause. He and John won admiration some years ago from members of the Kennedy Dynasty when the brothers entertained them in Washington with their “Ballad of Bobby Kennedy.” The inimitable Aggie Moloney on tin whistle was greatly enjoyed and she was with her friend, the lovely Teresa Grant, a native of Urard, Gortnahoe.

From Roskeen, Drombane came charming Mary O ' Malley (who enjoyed Shirley Valentine at The Source and Dominic Moore,(PC) who was assisting Tom’s brother, Pat, at the boxoffice. Spurs fan, Pat is a former National HiddenHeroes award winner for 40 years of devotion to his brother the late Michael Ryan, 30 KennedyPark, Thurles, as was mentioned by Mick Creagh who gave a towering performance in his M.C. role.

Mrs Mary Farrell, sister of the late Thurles and Munster rugby legend, Bobby O’ Bri en came from Malahide, Dublin and I met her with noted poet and historian, Una Crowe, Holycross. Thurles author and historian the popular Paddy Loughnane, is always present for Tom’s book launches. The popular Eamonn O’ Dwyer was there recording for his Down Your Way programme on Tipp FM. Eamonn is currently celebrating 21 years of presenting the popular programme which saw him interviewing Tipp folks in all parts of the county. Eamonn has covered all Tom’s book launches. He features in “Cuppa Sugar Days “also.

Well known singer musician and recording star, Kenny Ryder, accompanied Mick Creagh singing the hilarious “Pearl from Errill” by Pat Vaughan of County Kilkenny. Tom Ryan travelled all over Ireland for years in the bandwagon with Kenny Ryder and the 7-piece superband and wrote numerous articles short stories, poemsand a three-act play,”Showband”about life on the bandwagon -always a great show is Kenny who was preparing to celebrate his birthday -Mol an Oige Kenny!

Dr Labhras O' Murchu, who was accompanied by his wife, Una, Director of Bru Boru in Cashel, recalled the organisation dedicated to the tradition of music, song and ceili dance in Thurles called Cumann Cheoilagus Rinnce whose members included his great friend Eamonn De Stafort of the Silvermines and Tom Ryan.

Cumann Cheoil agus Rinnce in Thurles used to meet in the old Muintir na Tire Hall in Rossa Street , Thurles and its members in Arran sweaters used to travel to fleadhanna cheoil around the country.

Labhrás spoke of the importance of community and keeping a sense of community intact and of being aware of place and of tradition and of keeping our songs and music alive in a fast moving world. He noted the contrast between the fireside singing of the early years of Comhaltas and the 750,000 people -seven Croke Parks- attending the last All-Ireland Fleadh Cheoil in Drogheda. Today there are 1,500 music classes in Comhaltas.

Lauding Tom’ s four books which captured our past, he suggested that people should get together to discuss the stories of emigration and traditions such as Tom Ryan frequently wrote about in his books to better understand our Irish DNA and identity and roots -a nd, also to do this through the schools.

Labhras learned that night that the Fear a Tí, Michael Creagh, is grandnephew of the legendary historian/ musician Andy Dowling of Errill whom he recalled playing the hammer dulcimer on the streets at fleadhanna cheoil , accompanied by his great friend the renowned fiddle player Ned Looby of Templetuohy.