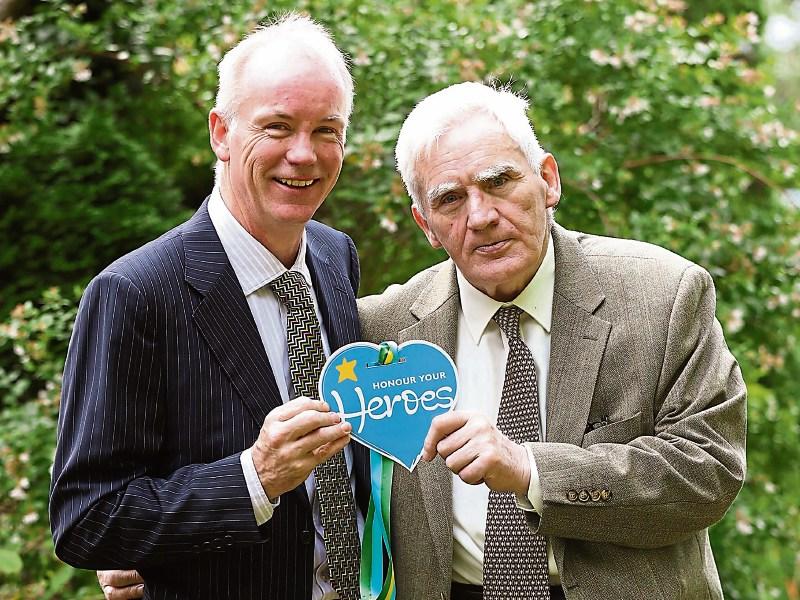 Former All Ireland winning Tipperary hurler John Kelly was a battler in his playing days and has proven to be just as much a fighter in his later years.

The stylish Cappawhite player was one of the stars on the Tipp team that won the All lreland title in 1971, beating arch rivals Kilkenny in the final.

But for much of the past two years he has battled serious illness. And he has shown the same resolve that he displayed when wearing the blue and gold in his fight to retain full health following brain surgery. He spent eighteen months in Beaumont Hospital where he was treated for a brain tumour.

But last week he was able to return to the hospital to thank the staff who had cared for him so well - especially consultant Dr James O'Rourke who came in for special thanks.

"He gave me wonderful care and I was so happy to be able to travel and thank him personally", John told The Nationalist.

John's wife Mary was equally thankful. "I don't think John would be here today without the work of Dr. O'Rourke. We cannot thank him enough", she said.

John's return to Beaumont was part of a Hospital Heroes progamme where patients return to say thanks to doctors and nurses.

The Cappawhite man was only too happy to take part. "I was so pleased to be able to say thanks. I was so well looked after there and Dr. O'Rourke gave me wonderful treatment. It was a lovely day."

John Kelly is hugely popular and well known throughout Tipperary. A wonderful defender with Cappawhite, Kilruane McDonaghs and Tipperary, his career highlight was winning a Celtic Cross with Tipp in that 1971 final.

And after last year's All Ireland win by Tipperary, the Liam McCarthy Cup was brought in to John in Beaumont Hospital for what was described as a very emotional occasion.

A teacher by profession, he was principal of Cappawhite Vocational School and followings its closure, he ran the very successful Youthreach progamme in the village. He retired in 2013.

But his life was turned upside down in June 2015 when returning from a family holiday in the United States with his wife Mary.

He became seriously ill on the flight home and received medical care on board. John and Mary were met at the airport by their daughter Margaret, who works in Beaumont Hospital.

She became alarmed at her father's condition and was he immediately rushed to Beaumont.

He was initially diagnosed with pneumonia and a clot on his right lung but when John continued to have complications with his recovery, a further brain CT scan revealed a posterior fossa brain tumour.

John had brain surgery and spent a year and half as an in-patient in Beaumont Hospital.

After the surgery John's recovery was slow and there were times he couldn't get out of bed. But under Dr. O'Rourke's care, he made slow but steady progress, until he was eventually allowed to return home to Cappawhite last December.

The fact that he never drank nor smoke probably helped his recovery, and as Mary says, he loves meeting and talking to people and was keen to return to his family and friends in the beautiful countryside of west Tipperary.

"The care in hospital gave him the quality of life to be able to return home and have a certain amount of independence", said Mary.

"I don't think he'd be here today without the care he received in the hospital and from Dr O'Rourke. We were so happy to be able to return to Beaumont last Thursday and thank him for everthing he did", she said.

“Many of those who shared their personal accounts have had to fight long and hard on the road to their recovery. But with the support of Beaumont and its staff, they have made a return to health and indeed, many of them have gone on to fundraise for improved patient care at Beaumont Hospital.

"The,‘Honour Your Heroes’ highlights our best product which is the medical expertise and the great level of care which staff in Beaumont Hospital provide to patients.

"And while we all know that resources are very tight and staffing shortages exist, this is about showcasing some very real stories of healthcare successes and proving that staff here in Beaumont Hospital are giving one hundred per cent to saving lives on a daily basis”, he said.