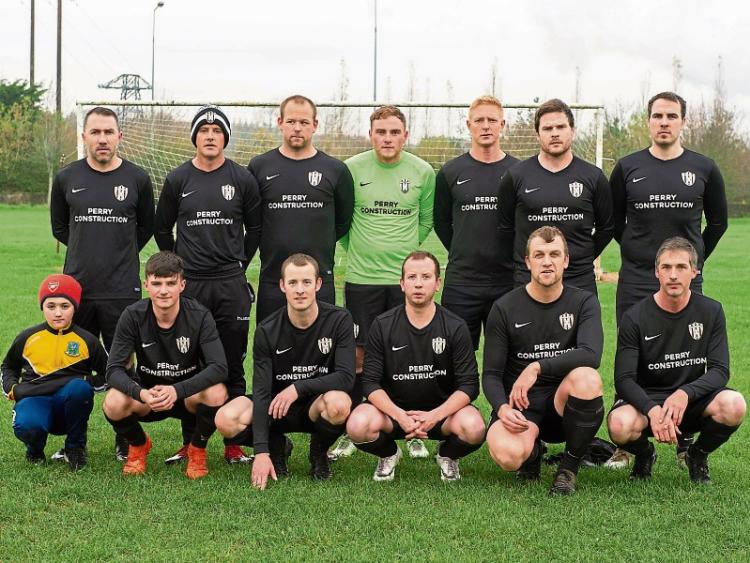 A recent photo of the Galbally United team. On Sunday they defeated Cullen Lattin in the Paddy Purtill Cup with Ricky Slattery (third from left back row) scoring the game's only goal.

This was  was scoreless at the break, with very little to do for either goalkeeper. The home side  began to get on top on the second half and thought they had opened the scoring when Quinn Perry went close ten minutes after the break from a Eoin O'Mahoney cross. They  made the breakthrough eight minutes later when Cathal Flynn set up Ricky Slattery to score from a corner.

The visitors pushed hard from here on to try to get back into the game but found it hard to make any clear-cut chances, and never really tested the home keeper.

The home side  won this  after a keenly fought affair. Villa enjoyed large amount of possession and had a couple of half chances, while in control of the pace of the game, but found themselves a goal down at the break after the hosts John Russell scored from a set-piece right on the stroke of half-time.

The same pattern emerged in the second period with the visitors dictating much of the play but never really creating anything of substance that looked like breaking down a very well organised Town defence. They thought that they had a strong shout for a penalty turned down  and then went down to ten men when they lost a player to injury after making all three substitutions.

Tipperary Town made sure of  victory in time added on when Russell added to his tally with a superb strike. from the edge of the area.

This was a first round game between these two sides that was delayed because they were also down to meet each other in the Munster Junior Cup over Christmas.

And though the venue was reversed, the result remained the same with Cashel Town holding an Indian sign over the Bridge again and advancing in the competition in which they will now be seen as one of the favourites to be eventual champions.

The home side were unlucky not to take the lead in the tenth minute when Brendan Boland was just unable to get to the end of a Kyle Ryan cross, and they were punished a few minutes later when the visitors took the lead after Niall O'Brien was clinical in finishing off a through ball from James Harding.

Cashel controlled the game for spells after that and had a few chances before adding a second minutes before the break when David Byrne finished to the net from close in.

The second half was really slow and dull compared to the first with Cashel controlling matters and not allowing the home side to build up and head of steam to get back into the game.

Johnny Cagney did pull a goal back with twenty minutes left but they never looked like getting the elusive equaliser and Cashel advanced to the next round.