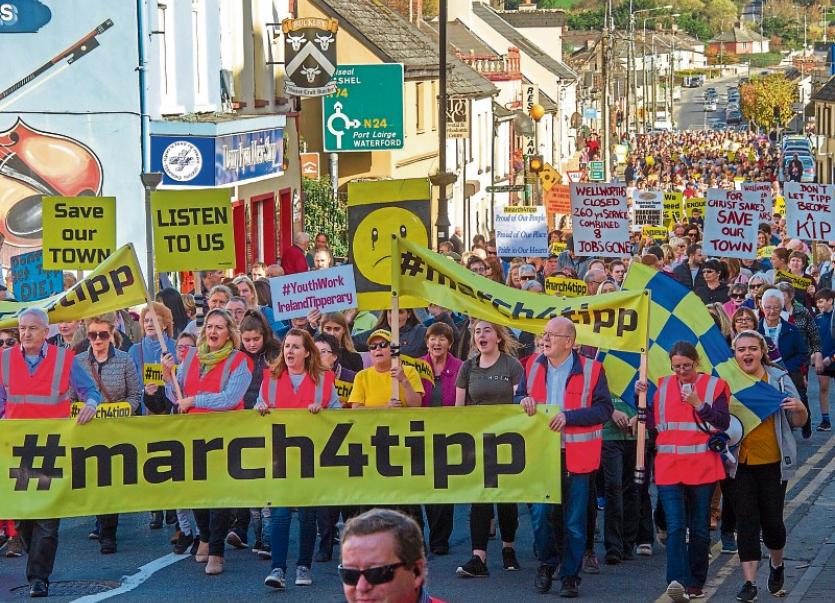 Group pledges to fight the proposal if it materialises

March4Tipp has claimed that it has come to their attention that the “democratically defeated council proposal for an inner relief road for Tipperary Town is back on the agenda”.

The plan for an inner relief road was quashed by the last ever Tipperary Town Council due to the concerns of many local community residents. The plan had called for a one-way system through Tipperary town, which would leave the town with the same congestion problems it has at the moment. Instead of bringing the 50,000 weekly traffic movements around the town with a ring road, the Council’s preference is to reroute a lot of this traffic through different parts of the town, according to March4Tipp.

March4Tipp got sight of a recent council briefing to Oireachtas members. In that briefing to TDs and Senators, Tipperary County Council asked for a range of supports, including an “inner relief road”.

Before the election March4Tipp conducted a poll to get a wider reading of people’s views asking the specific question – Do you think Tipperary needs a ring road? The answer was a resounding “YES”. Over 1,200 people took part in the poll with 95% agreeing that a ring road is needed, with 5% disagreeing.

Before the recent General Elections, March4tipp, Jobs4tipp and Tipperary Chamber collaborated in seeking commitments from candidates. The combined groups met with local candidates seeking election, to discuss their support for a ring road. All of the major parties including Fine Gael, Fianna Fail, Sinn Fein and the Greens, as well ask key independent candidates gave strong written statements of support for a ring road around Tipperary Town. Many businesses and houses throughout the town continue to display the ”no ring road – no vote” flyers that were distributed at the time of the election.

However, March4Tipp now fears that the council wants to revert to its 7 year-old proposal to push the traffic through different parts of the town. That plan would either drive massive volumes of N24 traffic behind Canon Hayes Park, along Abbey Street and the Link Road or behind Rosanna, splitting Rossmore Village from the town, and along the road between Knockanrawley and Pearse Park.

“The Council is playing cloak and dagger with people by, on one hand seeking political support for a so-called “inner relief road”, and on the other hand not telling residents where it plans to put that road,” said Padraig Culbert of March4Tipp.
“The very term “inner relief road” means that it runs through the town and the community. That doesn’t relieve the town and community of the toxic N24 traffic; it just spreads the pain” he said.
“It’s time the Council told the people what parts of our community are they planning to saddle with the N24 traffic, including its noise and air pollution. Are residential, school or healthcare environments to be impacted? We won’t know until they come out and say what they are planning.”

Tipperary Town is currently undertaking a Task Force Revitalisation process and a Town Centre Health Check, both with the vision of a better, busier, brighter Tipperary.
March4Tipp believes that this will not be achieved without removing the huge volumes of traffic that the town has to deal with in normal times.

Lisa McGrath from March4Tipp said: “We looked like we were beginning to start turning the corner in revitalising our town, but it is clear that the Council just sees it as a roadway, a matter of managing traffic and road projects. This is not something one should expect from Local Government. The interests of the community should be uppermost in the Council’s minds. The old ways of doing things, like the travesty of the Davitt Street/Church Street works cannot be repeated. The people just won’t allow it.

“If the Council is determined to continue to burden our town with toxic N24 traffic, we feel strongly that the people will speak out and that there will be a massive backlash. We will be at the forefront of that, if it is necessary. Enough is enough,” she said.