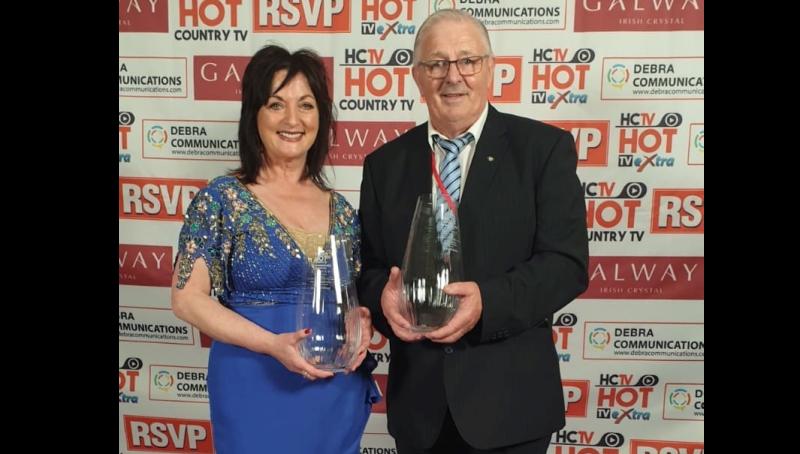 The Bansha lass, Louise Morrissey and the Bansha man, Mike Maher, with their awards at the Hot Country Awards

Two Bansha people were in the spotlight at the Hot Country TV 10th Annual Awards Concert in the Slieve Russell Hotel, Cavan, on Tuesday, April 5.

Louise Morrissey has long been one of Ireland’s best loved singers and entertainers.

Louise is a former member of The Morrissey’s Folk Group from Bansha along with her brothers Billy and Norman. Louise continues to be one of Ireland’s most popular singers in the Country & Irish Music scene and the Bansha lass picked up the Best Irish Female Award at the Hot Country TV Awards.

The second award to a Bansha person was to Mike Maher for his contribution to Country Music for over 30 years at Tipperary Mid-West Community Radio.

Mike is the current Chairperson of the Board of Management at the Radio Station and has given outstanding service as both a presenter and Board Member in a voluntary capacity to local radio during those 30 plus years.

For many years Mike was assisted by his late wife Noreen, who passed away in 2012, and I know that this award will also recognise the work that she did in supporting Mike in presenting on the station and in organising country music events over a wide area.

There is no doubt that Mike is well deserving of this award from Hot County TV.