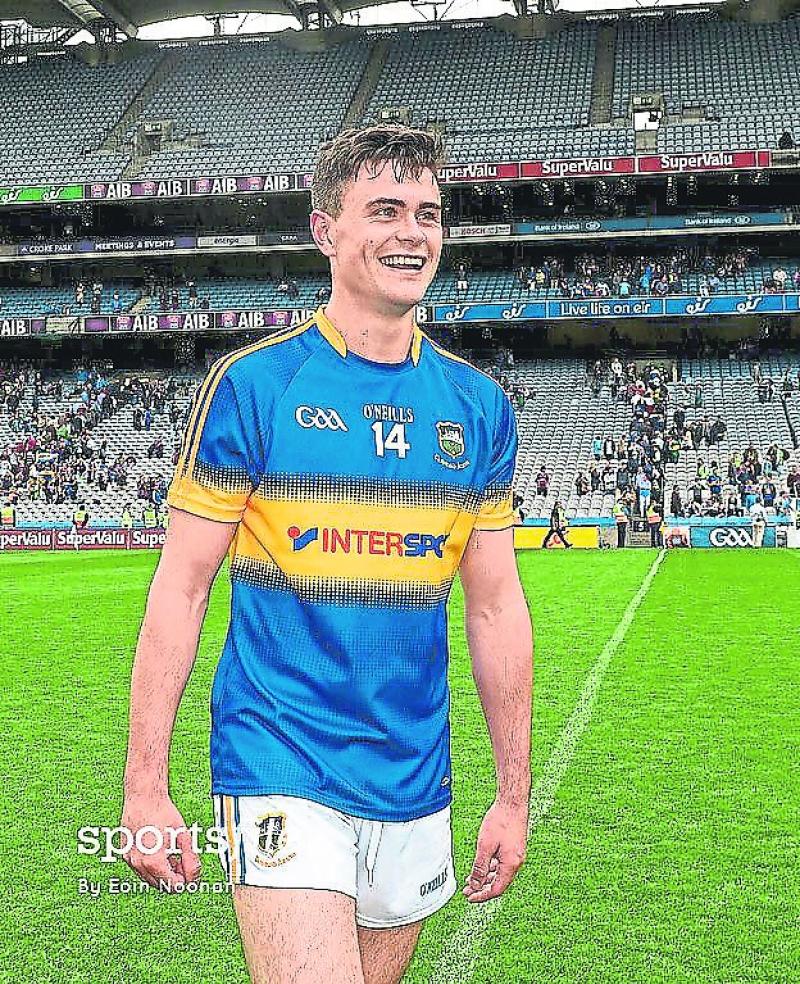 Michael Quinlivan will be back for Tipperary's next game against Kildare

A 20 minute period of dominance by Cork either side of half-time in which they outscored Tipperary by 0-7 to 0-0 was ultimately what decided the National Football League Division 2 clash between the sides at Semple Stadium, Thurles, on Saturday night.

The resurgence for Tipperary between the 48th and 60th minutes took them to within striking distance of ‘The Rebels’ with 10 minutes remaining, but Ruairi Deane’s 65th minute goal - perhaps Cork’s only real shot on goal all night - left the home side six points in arrears and with a mountain to climb.

Tipperary’s third defeat of this campaign and their second in just six days increases the pressure of relegation on Liam Kearns’ team, and with just two games now remaining - away to Kildare in Newbridge followed by a home game to Clare - it now seems that Tipperary might need three points to survive, and depending on results elsewhere, that may not even be enough.

Against the breeze into the Killinan end Tipperary had started well to lead by two Conor Sweeney points (one a free) after eight minutes before Cork, packed with pace in all lines of their team, scored four unanswered points in a five-minute spell to seize the initiative. Two well-taken points from inside the 'D' by Jack Kennedy and Brian Fox restored parity after 27 minutes and it looked reasonably healthy for Tipp as the interval approached.

However, Cork rattled off the last three scores of the opening half including fine efforts from Eoghan McSweeney and Paul Kerrigan to lead 0-7 to 0-4 at half-time, the visitors also kicking six wides and seeing a couple of efforts come back of the uprights in the first 35 minutes. Tipp had just two first half wides and three in 70 minutes.

Cork emerged for the second half more fired up it appeared and a free off the ground by Luke Connolly inside a minute made it double scores, 0-8 to 0-4.

Cork were very much on top all over during the opening minutes of the half stringing long patient phases of possession together time and again from which Connolly scored his first from play and then Cillian O’Hanlon added another after a high ball into the area broke to him. And when Mark Collins, with a close-in free, made it 0-11 to 0-4 -following a last ditch foul on the rampaging Sam Ryan - it looked as if Tipperary were in for a horrid night.

Tipperary captain Conor Sweeney eventually got the hosts moving again with a 48th minute point, their first for almost 20 minutes, and it was quickly followed by a free from the Ballyporeen man after Philip Austin was impeded.

A goal chance followed for Tipp out of nowhere when Liam Casey's good pass found Kevin Fahey who had ghosted in behind the Cork defence but the wing-back’s effort was parried over for a point by Micheál Aodh Martin; the seven points deficit had now been reduced to just four and Tipp were motoring better.

By the hour mark, after a plethora of substitutes (3 Cork and 1 Tipp) Tipp were somehow within one score of Cork at 0-12 to 0-9 with 10 minutes to play, a Luke Connolly free for the Leesiders answered by a brace of Sweeney points (one a free, and one a converted mark).

A grandstand finish looked on the cards for the 1,179 in attendance but five minutes from the end Cork manufactured a sweet goal. A well placed hand-pass from substitute Sean Powter put Ruairi Deane in the clear and his finished high to the roof of the net. You have to take your goal chances - Cork got one and did.

Late points from Tipp sub Dan O’Meara and another from a Sweeney free had it margin back to four when Tipperary got a second goal chance late on, this time Conal Kennedy’s effort saved by a defender at the expense of a 45 which his brother Jack superbly converted.

With the clock going into added-time-on Tipperary twice did aerial bombardments into the Town goal looking for a lucky fist but the Rebels weathered the storm to pick up their first win of the league. This victory give themselves a fighting chance of survival with two games still to come for them also. Next up for Ronan McCarthy's side is a game in Páirc Uí Rinn against Donegal followed by a trip to Armagh. They too will have plenty to ponder in the concluding weeks of this league also. But  they were deserving winners in Thurles and probably could have made it even easier on themselves such was their possession rate at times.

After the game Liam Kearns told the press that Michael Quinlivan was just back in training and will be available for the Kildare game. Evan Comerford was substitute keeper tonight having returned from injury, while there are others coming off the list that he hopes to have at his disposal for the vital two games still to come. Tipp will need them all.