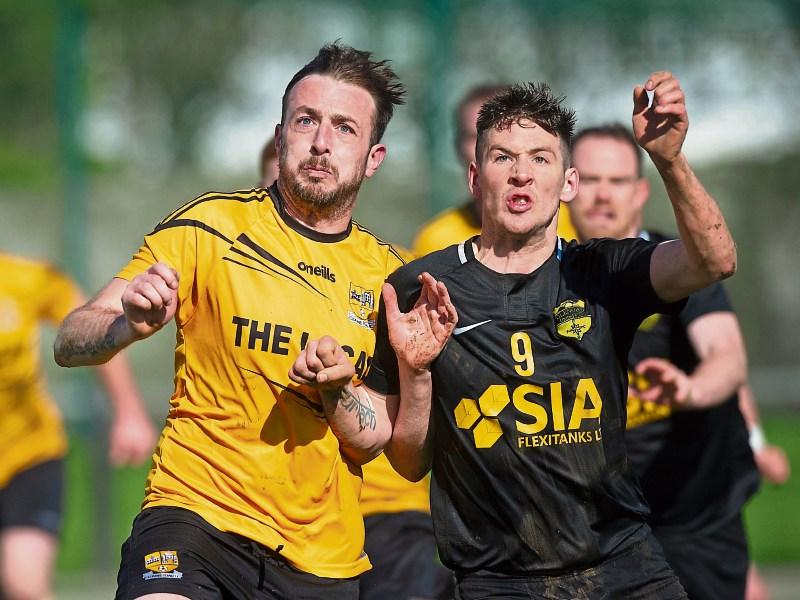 Winners of this competition in 2014 (and previously in 1974), the TSDL’s St Michael’s battled hard on Sunday last in appalling conditions to qualify for the semi-finals  of the FAI Junior Cup once again. On Sunday they came up against old rivals from Kilkenny in Evergreen, another team with a formidable record in Ireland’s greatest Junior Cup competition.

The first 15 minutes saw the first hailstorm of the day and the driving wind negated against good play with the ball was out of play a lot as both sides sized each other up.

On 17 minutes the home side had the first half chance of the game when Paul Breen did well to head away a dangerous Chris Whearty cross, with a number of players lining up behind him to add a scoring touch.

And in the 28th minute the home keeper had to be sharp off his line after Willie Armshaw played in John O’Brien on the left as the Tipperary side attempted to land the first blow.

Saints were coming more into the game at that point and with three minutes left to the break took the lead when a good move saw Shane Ryan in shooting space and his left foot shot beat Johnson in the home goal. Just on the half time whistle a David Slattery dummy set up Colin Bargary but his shot was saved and pushed away for a corner of which naught came.

The start of the second half saw another hailstorm, with the home side now having the elements at their backs, but their preferred tactic seemed to consist of a high ball in on top of the Saints defence, something that was meat and drink to two excellent centre halves in Paul Breen and Sean Guerins at the heart of the Saints defence.

With ten minutes left a half chance saw Deccie McQuillan slice his effort wide of goal, and after that the visitors were looking very comfortable even with Evergreen gambling on three at the back, and pushing extra players on.

The final whistle was eventually greeted with a mixture of relief and joy as Saints were back in the semi-final, a victory that was built on a solid defence with Aido Walsh behind a solid back four that didn't give an inch. The midfield and attack worked well and Saints strength in depth saw them introduce Joey Mulcahy, Olly O'Driscoll and David Joyce and the fresh legs took pressure off the defence in the last quarter.

They will now face the conquerors of Clonmel Town, Glengad United from Donegal,  but the Saints have managed to secure a home draw which should mean a fine crowd out to support the side as they assume favouritism to win a competition that has always been close to the heart of the Tipperary side.

Dreams of perhaps adding a second FAI Junior Club title to the one won by the club in 1994 were ended on a bitterly cold day in the Complex in Clonmel on Sunday as Clonmel Town went down by 3-1 against a very accomplished Donegal side in Glengad United.

The home side were quietly confident going into the game of progressing but were met by a strong, pacey, powerful and technically accomplished side who pinned the hosts back right from the off in this game.

And it was the away team that made the first impression on the scoreboard when they took the lead after some very clever build up play released Connor Barrow to beat the home keeper from close range.

Town did eventually get a handle on the game however and started to come back into in especially in the centre of the pitch where they won more of a share of the ball. This eventually allowed them to create some good goal scoring opportunities and one of these was finished to the net by Ryan Lambe to level the game, midway through the second half.

Unfortunately for the hosts though, they were unable to build on the equaliser and it was the Donegal side that found the extra gear, retaking the lead through Terence Doherty ten minutes later.

Forced now to chase the game, Clonmel Town increasingly left gaps open at the back and at this level such gaps were going to be exploited ruthlessly, which they were eight minutes from time when Christy McLaughlin scored the third and insurance goal for a side that were later drawn to play the last TSDL side in the competition, St. Michael’s  for a place in this year’s  New Balance FAI Junior Cup final.