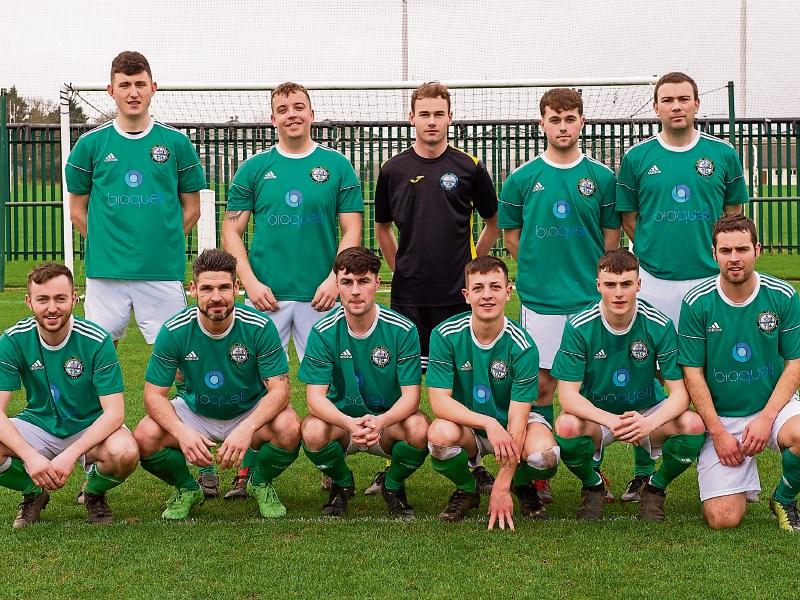 A Clonmel Celtic Premier League team from earlier this season.

Clonmel Celtic B remain firmly in the promotion after a well merited two goal win against Bansha Celtic at Celtic Park on Sunday .

It was a lacklustre opening 30 minutes with both defences on top and little in the way of clear cut chances.

As the first half wore on, Celtic began to create openings.  Seven minutes from the break the home side finally made the breakthrough they were threatening when Rory O’Dowd threaded an inch perfect pass to Tucker Kennedy who turned inside his marker and fired low to the corner to give his side a lead they kept to the interval.

The pattern was much the same in the second half with Celtic doing the pressing and creating the better chances while their defence comfortably managed any threat posed by the visitors. On 65 minutes Kyle Kennedy had a free kick saved and a minute later Dean McLaughlin came close.

The hosts needed the assurance of a second and Bansha gave an indication of the importance of that when Ryan Maher took advantage of a defensive lapse but he couldn’t manage to get a shot away. Twelve minutes from time the Clonmel side came close again when man of the match Rory O'Dowd picked out Tucker Kennedy with another pinpoint pass, and he set up Shane Butler who he was crowded out and the danger was cleared.

However, it was only a brief respite for Bansha when two minutes later Butler got on the end of a Kyle Kennedy free to flick the ball home and make the game safe for his side.

Butler nearly added a third a minute later when his shot hit the post. All in all it was a deserved win, and they remain in the fight for both a title and promotion.