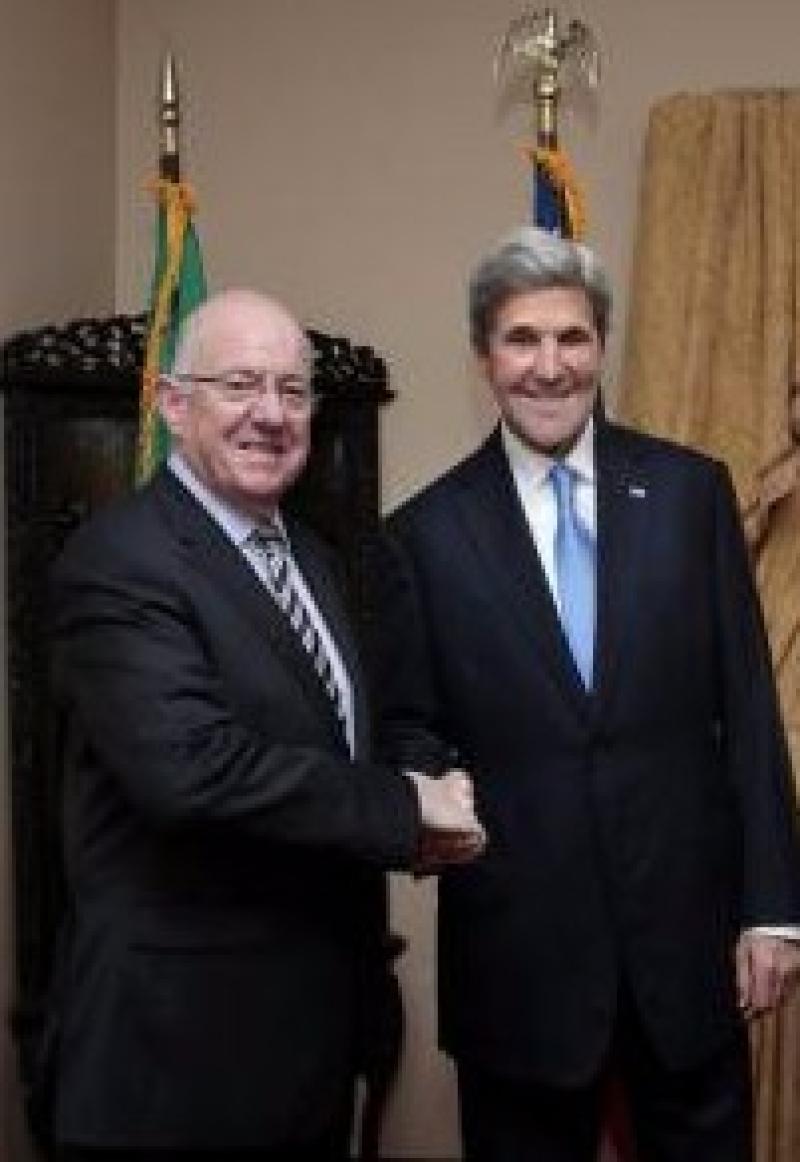 United States Secretary of State John Kerry was lauded as a 'very worthy and deserving recipient' of this year's International Peace Award by organiser Martin Quinn, at a high security ceremony in the restored Aherlow House Hotel.

United States Secretary of State John Kerry was lauded as a "very worthy and deserving recipient" of this year's International Peace Award by organiser Martin Quinn, at a high security ceremony in the restored Aherlow House Hotel in Tipperary today.

The Massachusetts Senator has dedicated his life and traversed the world in the passionate belief that peaceful diplomacy can reconcile long standing enemies and bring about positive change for millions across the globe, Mr Quinn told the world media, local politicians and guests.

Minister for Foreign Affairs and Trade Charlie Flanagan greeted Sec. of State Kerry in Shannon before flying on to Aherlow near Tipperary town where the two men discussed Northern Ireland, the challenges posed by the UK's intended withdrawal from the EU, trade negotiations between the US and the EU, and Ireland's strong commitment to peaceful development.

At a press conference overlooking the stunning Galtee Mountains, Senator Kerry recalled Massachusetts' strong links to Ireland, the status of illegal Irish immigrants in the US, and the ongoing wars in the Middle East.

Ireland has made an "extraordinary contribution" to peaceful resolutions in conflicts across the world, and punches above its weight when it comes to ending nuclear proliferation, said Senator Kerry. "Your peacekeeping efforts are legendary now." Few nations understand more fully the challenges of addressing age old conflicts over territory or sovereignty than Ireland. "It's a lot harder to pursue peace than make war."

Senator Kerry said Ireland and the United States enjoy a special relationship, and ties of blood and friendship going back centuries. The White House remains committed to both the 'Fresh Start' and Stormont House accords.

The UK's decision to leave the EU must not impact on the Peace Process, and both Senator Kerry and the President felt that the UK leaving the Union was "not the way to go". "We are committed now to figuring out who do we answer some very tough questions. How do you maintain the economic opportunities which came through the EU, while at the same time reconciling the requirements of the will of the people with access to the Single Market. This is a tough issue, and I can't tell you exactly how that's going to be resolved."

Senator Kerry said the United States wants a strong UK, EU and Ireland, "and we will work as hard as we can to maintain those."

Senator Kerry praised Ireland's global role and input through the United Nations, which has been critical to conflict zones such Libya, Chad, the Congo, and Ireland ranks amongst the top 10 countries in the world for humanitarian assistance "with an investment of nearly €100m in this year alone, in order to protect refugees, to combat disease, and spur economic development. The people of Ireland should be proud, and I want to emphasise how grateful we are in the United States for this partnership."

Senator Kerry pointed to the successful J1 programme and the more than 150,000 Irish students who have worked and studied in American cities and Universities. "Exchanges that enable these young interns to come over and study our cultures and our customs. I am pleased to announce that I will be signing a new MOU (Memorandum of Understanding) which will expand the number of young Irish people who can spend a full year as interns for US enterprises, giving them the chance to be able to expand important skills before returning home."

For a full account of Senator Kerry's visit and acceptance speech, see p2 of this week's Tipperary Star.