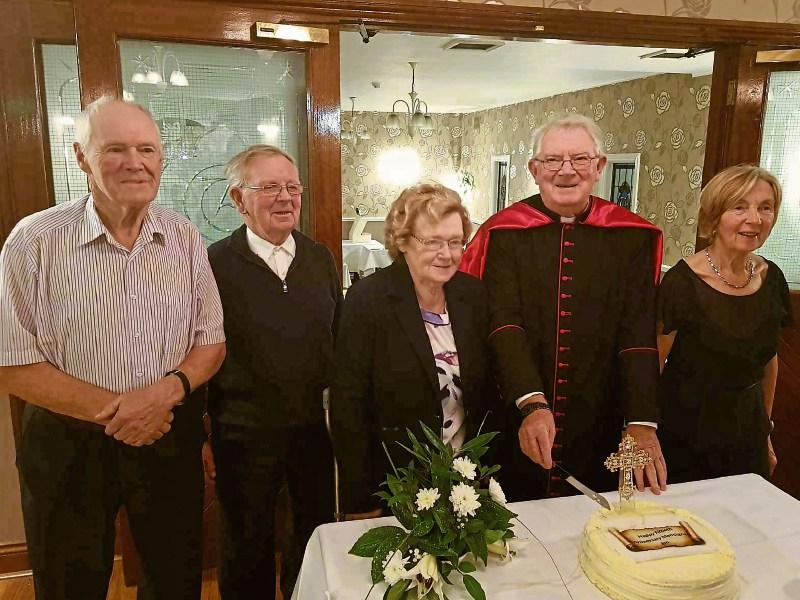 On June 8th last Monsignor James Costigan, a native of Clonakenny, celebrated the Golden Jubilee of his ordination.

50 years ago in 1968, he was ordained to the priesthood in St Patrick’s Carlow College destined for ministry in the United States.

Three months later he arrived in Savannah and served in New Orleans and Louisiana for a six months spell. He then moved to Augusta, Georgia for three years before his move to Savannah. He was re-assigned to “St Mary’s on The Hill” which incidentally incorporates the National Golf Course where ‘The Masters’ is played.

As a young boy James attended St Cronan’s NS in Clonakenny, moving to the  CBS Templemore and later to St Flannan’s Ennis before beginning his studies at St Patrick’s College Carlow.

“Priesthood to me is presence”, he says, “ When I was ordained and called to be a priest I responded to my name on that ordination day as Present and my life has been one of responding and presence to all people at all the important moments of their lives when sickness, the death of a loved one, baptisms, marriages or moments of crisis occur.

“This is when the priest is present and representing Christ to people in a unique and special way, and that continues in my life. I don’t ever see a time in my life even in semi-retirement that I will cease to be present to people and bring them the presence and consolation of the priesthood of Christ as somehow present. I enjoy doing that and want to continue as long as I am able to do it”

Of his Golden Years Mgr James says “there were wonderful opportunities – sure there were moments of question, of doubt, of hard times, but in the most part they were glorious years. When you bring consolation, you bring peace, you bring hope to people’s lives and you come away feeling a sense of fulfilment and joy and peace in yourself.

“And irrespective of all the things that have happened over all these years of abuse and things that have happened with regard to the church and priesthood, which has deeply affected all of us as priests, yet, where do we go? We go back to Jesus, we go back to Christ and his presence. Where else do we have hope, where else do we have joy? - in the church with all its afflictions and shortcomings and to priesthood.

He continues: “There is so much joy attached to a priest’s life. When you walk into a person’s room when they are sick and dying and you administer the sacrament of the sick and communion, the power of Jesus in healing them – maybe not physically, but spiritually and emotionally, that is so powerful that it overcomes all of our doubts and fears,-

“That is the Church – that is the ministry of priesthood that is so powerful and overwhelming, and we can never eliminate that. And that has been the joy of my life – so many, many times that I’ve experienced that presence in administering the sacraments which have the touch of Jesus in healing and consoling and preparing people to enter into the joy of heaven – the joy of eternal life. That I firmly believe in, and have lived my life”.

Mgr James is a cheerful and  jovial character,  loves to visit home every year to meet up with his brothers Liam and Tom Costigan Clonakenny, and sisters Elizabeth Gleeson in Templetuohy and Margaret Dillon in Castletroy  - one of whom makes delicious brown bread  we are told ! also his 16 nieces and nephews.

Over the years he has made 54 trips back and forth over the Atlantic – He enjoys helping with the farming, haymaking and meeting the locals to share a glass of Guinness at the end of the day.

He strongly maintains there is no Guinness like a home brewed Guinness !

He tells us there is a big Irish population in Savannah – seemingly in the 1700’s there was a direct shipping line from Wexford to Savannah.

They also have the second largest St Patrick’s Day Parade in the US – second to New York.

In recent years he has brought groups to visit Ireland, where they can get to know the genuine Irish experience of visiting Irish homes, enjoying the greenery, scenery and relaxed atmosphere, with the odd barbeque and sing-song in backyards along the way.

Mgr James is wished well in his ministry and we hope he enjoys the remainder of his annual holiday in Ireland.