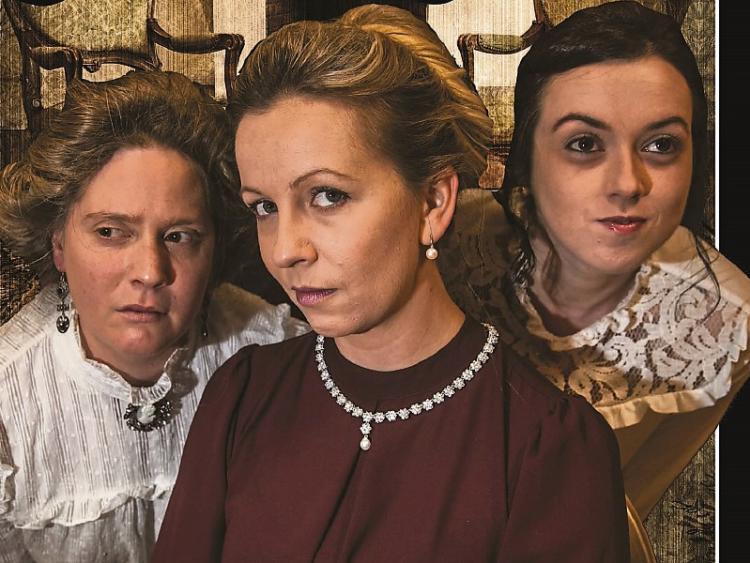 Cashel Choral and Dramatic Society’s highly entertaining thriller ‘Ladies in Retirement’  by Edward Percy and Reginald Denham runs from Thursday 17th to Sunday 20th November at Brú Ború, Cashel.
The play is set in 1885 in a remote, lonely house on the marshes of the Thames estuary where retired actress Leonora Fiske lives with her companion Ellen Creed.  At first, a visit from Ellen's two sisters does little to suggest what lies ahead but when the eccentric guests make themselves at home, Leonora's patience wears thin.  She requests that Ellen's guests leave, leading to a bitter row and a suspicious disappearance. The arrival of the Creed sisters nephew Albert only adds to the mystery and suspense as his own shadowy past complicates recent occurrences.  The observations of both the maid Lucy and their neighbour Sr. Theresa throw up some interesting questions. Has Albert stumbled upon madness? Or murder?
First performed in London in 1939, Ladies in Retirement was an enormous hit both on the West End and Broadway and was subsequently made into a film in 1941, receiving two Oscar nominations. A masterpiece of suspense with beautiful comedy moments, this play cannot be missed!
Starts at 8pm each night. Tickets €15. Concession tickets for students and senior citizens on Thursday 17th and Friday 18th November are €10.  Tickets available from O'Dwyer's Pharmacy, Main Street, Cashel, on 062 61318 and Brú Ború on 062 61122. For more information, contact Carrie Kavanagh on 087-6961409, email cashelchoralanddramaticsociety @gmail.com or follow them on Facebook.