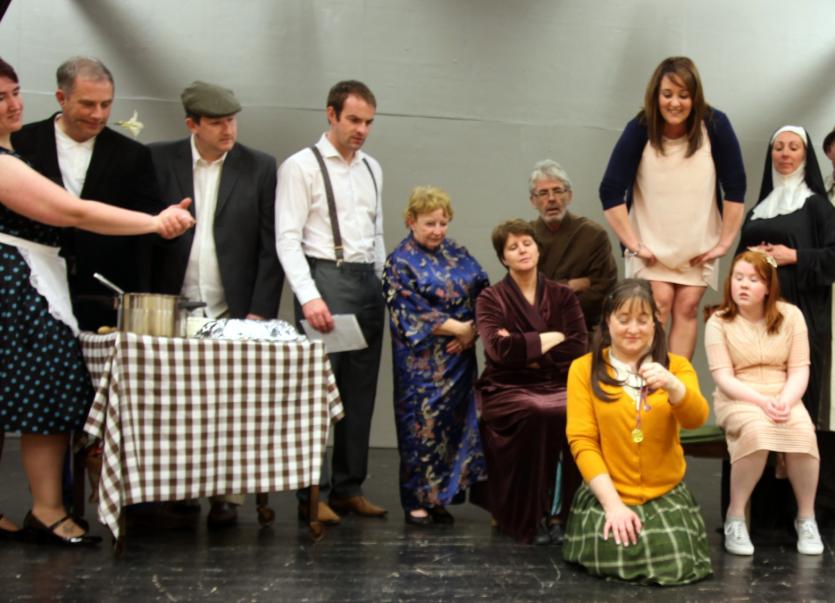 Moyne Drama Group’s production of "Same Old Moon" is the tale of aspiring writer Brenda Barnes and the life of an Irish family between the 1940s - 1980s.
Built around a sequence of recollections from Brenda’s life, the play follows her from age nine to her mid-forties, taking us from her early days in Galway through to her return to her adopted home in London. Her life story, as seen through her eyes, portrays her eccentric and sometimes fiery Irish family - her wilful and self-destructive father Desmond, her put-upon, sometimes hot-tempered mother Bridie, her whinging aunt Peace and her puritanical maternal Granny Cleary from Galway.
Hilarious scrapes erupt when Brenda's imagination and intelligence bump against the restrictions of Irish and English customs and society, and through her journey, she learns about attitudes to race, sex and love - sometimes the hard way. It's a play combining comedy and poignancy throughout, and promises to entertain.
“Same Old Moon” is one of several works that author Geraldine Aron has written for the stage. Geraldine was born in Galway in 1951 but spent most of her adult life in Zambia, Zimbabwe and South Africa. She is also the author of 12 plays produced for television and radio. Her hugely acclaimed one-woman show, My Brilliant Divorce, has been performed all over the world and was nominated for an Olivier Award in 2004. She is also the past winner of two Edinburgh Fringe Firsts, for Bar and Ger and A Galway Girl.
The highly experienced cast is comprised of: Geraldine Delaney (Brenda Barnes), John Quinlan (Desmond), Maureen Claffey (Bridie), Mary Campion (Peace), Helena Birmingham (Bella Rafferty/Mrs Browne), Katie Chapple (Granny Cleary/Mother Superior/Mrs Geeney), Hugh Coughlan (Barman), Pajoe Hayes (Mooney), Ger Jones (The voice of Enrico Caruso), Ken Murphy (Mark/Mr Mullen), Trish Gavin (Café Daphne/Nurse), Liam Troy (Postman).
We are delighted this year to welcome three new members to the group, John Coughlan will take on the role of Kevin Cleary, Brenda’s cousin while Aine Bowe and Emma Buggy are charming and hugely entertaining in their roles of Di and Tess, respectively.
This superb production is once again in the capable hands of our director Joanne Bannon and she has surrounded herself with expertise in the role of lighting which is being designed by Gerry Taylor and operated by P.J. Ryan while our sound system is the responsibility of Bill Hogan. Ailbhe Hayden has the unenviable task of Stage Manager and our choreographer is Therese Maher so expect some fancy footwork!
The production takes to the stage of Moyne Community Centre on Thursday 26th January and runs until Sunday 29th January at 8.30pm nightly. As there are no pre-booked tickets available, please make sure to come on time to secure a seat.