Why try fit in, when you were born to stand out 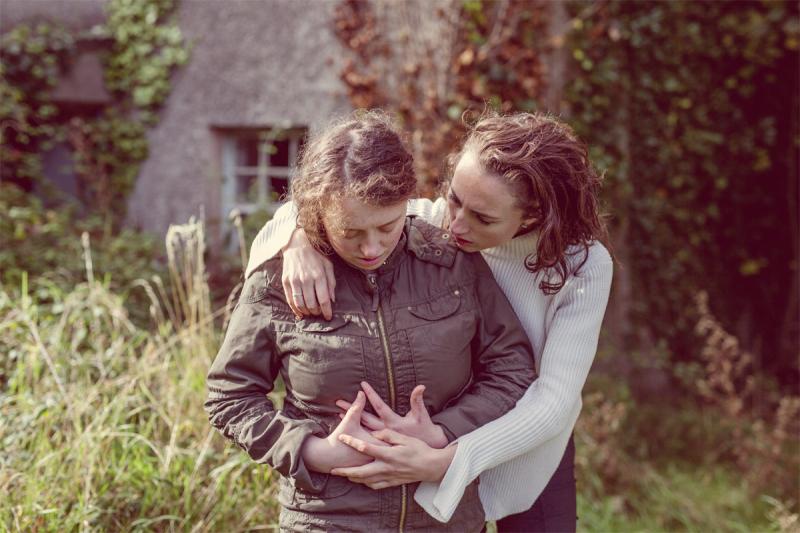 Up the hill Jackie, from Upperchurch sister act Aine and Erin Ryan, made its official stage debut last month. Following a sold out performance, the sisters will make a welcome return to the Source Arts Centre this March. Erin Ryan plays the role of title character Jackie who finds herself pregnant and forced by her older sister Rita to have an abortion in London. However over the next 12 hours humour, danger and love combine as the girls embark on the biggest adventure of their lives.

Education: Leaving Cert class of 2016 from the Ursuline. Currently on a gap year.

Music: Anything out of Musicals!

What are your earliest memories of performing?

Well I think I am the luckiest person in the world having the experience of growing up in "Jim of the Mills" as this gave me the platform I wanted for expressing myself in front of people and naturally gave me the confidence for acting today. The earliest memories are probably taking part in Scór in the novelty act and recitation competitions from junior infants. Winning county medals numerous times in each! Mammy was a saint putting hours into writing them and then directing them.

Is 'Jackie' your first major role on stage?

Yes "Jackie" is my first major role. I've had parts in my school shows playing "Gavroche in "Les Miserables" and " The Artful Dodger" in "Oliver and also was cast as "Chip" in Tipperary Musical Society's production of Beauty and the Beast. However they were all short term roles. They were all musicals too so "Up the Hill Jackie"  is a whole new experience with a lot more lines to be learned!!!!  But I am very grateful for Áine for trusting me with the role and allowing me take it on.

The play premiered to a sold out house. Were you nervous on opening night?

Honestly I thought my stomach was going to explode with butterflies . I was very uneasy and on edge. Also after all the promoting and talking we did about the play we wanted it to be a success and give a goods night entertainment after all the support that we got in the weeks leading up to it. But once the curtain was pulled across  I was in my complete  element. I wouldn't have swapped the stage for a seat in the audience for the world. The stage is like my second home . I'm very relaxed and composed on it while trying to remember everything at the same time. But nerves are good and I would nearly be more worried If hadn't them.

Was it difficult to get into the mindset of Jackie? How did you approach the character?

It did take me a while to get into the character and it probably wasn't until the last day or two of rehearsals in January that I felt comfortable and natural being her. Also because most characters that I've played before already exist its easy to watch a video and follow from there but as "Jackie" is made up and "new" it was difficult to work out how I could approach putting myself in her shoes. Not only that but I didn't want to disappoint Áine with my portrayal of her. After all, Áine had created her and had an exact idea of what way she should be . So I am thankful that Áine is directing it herself as she helped me to get inside Jackies mind-frame and come to love her. I didn't realise the value of actually "understanding" a character before playing them until I started working on "Up the Hill Jackie" .

The cast is just yourself and your sister. Was this an added pressure or a bonus given you only had Aine to rely on?

If anything it was a bonus! The two of us work really well together, surprisingly! It's much more easier because the two of us are so comfortable and at ease with each other. Criticism is much easier to give to your sister rather than anyone else! I think we bounce off each other very well in the play and its natural between us. We are two sisters playing two sisters.   We also both knew that if any mishaps took place on the night we'd be able to count on each other not to panic and improvise.

Despite its serious nature, the play has a lot of laughs and your comical timing is to be admired. Were you always a joker in school/ at home?

Yes definitely! Anyone that knows me or my family can tell you that we don't take life too seriously.  As they say "Laughter is the best Medicine" and humour never strays to far from us. Regarding the play I feel like even though the subject matter is dark and serious the humour is just enough to balance it out. There are moments that you could be irrupting with laughter  all the while feeling tense at the same time! That's one thing that I will complement Áine on, she has mastered the art of wit!

Up the hill Jackie deals with several prominent issues including mental health. What are your thoughts on the current mental health services on offer in the country today?

I think there is lots of services available and great work being done by various organisations. I think it is important we encourage ourselves to talk about our mental health and encourage each other to work out our issues. There are plenty of books and services available but it's important we feel confident enough to receive support and allow ourselves awareness that having a patch of bad mental health is natural and we can recover from it with the right attitude.

Did having a sister who is an actress encourage or deter you from pursuing acting?

Drama and acting has been my "thing" from the get go so it didn't have a massive effect on me when Áine wanted to do it too. But now it's a brilliant advantage as she's given me this platform to start my career.

Do you see yourself writing your own play/ script in the future?

I like to write but not plays more so fiction stories. I've tried to write short plays  but it didn't go as I hoped so I think ill leave the plays to Áine for the time being !

Where do you see yourself in five years time?

In five years time hopefully I will still be acting full time and following my dreams. But I never look too far into the future. I like to enjoy the present and take whatever comes in my direction at this time in my life.  Its important that we live everyday to the fullest. We're not here for a long time, we're here for a good time!

What's the best advice you were given?

"Why are you trying so hard to fit in when you were born to stand out" is my little phrase that I like to live by.  Nowadays everyone are clones  of each other, especially boys and girls my age. I think its important to march to the beat of your own drum but most importantly be proud of who and what you are.