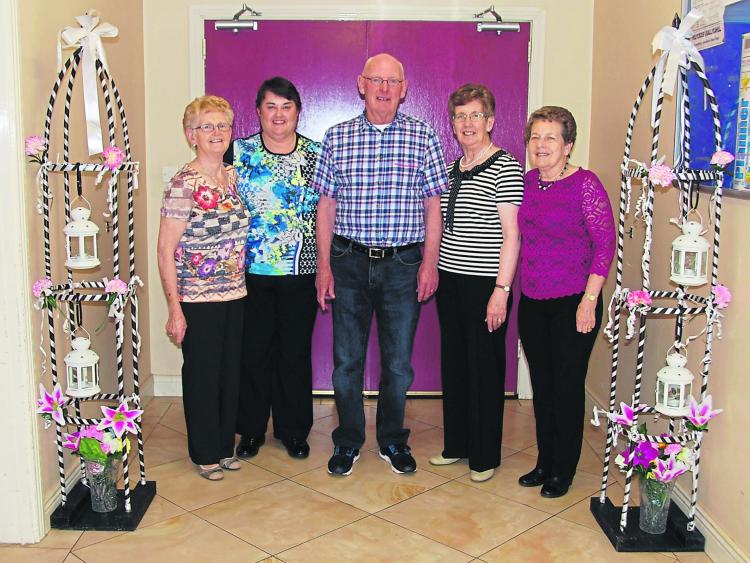 This former church built in 1834, was renovated in 2000 for use as a community centre. The Connie Ryan Festival was formed nineteen years ago to celebrate local dancing master Connie Ryan who was born and reared in Clonoulty, and died in May 1997. Connie moved to Dublin for work and immersed himself in the music and dance there in the 1960s.
In the 1980s, operating in a parallel universe to Willie Clancy Week in Milltown Malbay Co Clare and the Brooks Academy, Connie stepped up his focus on the quadrilles. He formed a group - the Slievenamon Set Dancing Club travelling around Ireland learning sets in different counties from primary sources in the older generation, who held fast to the tradition of the house dances. This group of dancers made two historic trips to the Northeast U.S. in 1988 with 57 members in tow, and 1991 with 46 participants accelerating the transmission of the dance form over here.
With these travelling parties he was able not only to instruct in great detail but also vividly demonstrated with full sets of eight how much fun there was in the dancing. Connie taught set dancing all over Ireland giving workshops reviving sets and instilling a love of set dancing in everyone he met.
Connie was a character and was known to often use language that we would consider politically incorrect, but he brought to set dancing what Riverdance brought to step dancing.
The festival of Ceilis and workshops got underway on Friday night. Welcoming everyone committee secretary Bridget O’Gorman said it was wonderful to see so many familiar dancers and a great crowd of newcomers.
Ger Murphy and Ken Cotter took to the stage and doled out magical music for the first ceili. Thurles dancing Master Michael Loughnane was MC and kept all the dancers happy and comfortable with his timely calling. Michael has been associated with this festival since its inception and was a personal friend of the late Connie Ryan. Michael has also spent most of his life teaching dancing and promoting the Irish language. He teaches a set dancing class every Thursday night and runs monthly ceilis in the band hall in Stradavoher, Thurles.
Saturday morning the set dancing workshops got underway at 10.30am. World renowned set dancing Master Pat Murphy directed the two workshops on the day. Pat was born and reared near the Metal Bridge, an area between Drombane and Upperchurch, just out the road from Holycross. Pat resides in Dublin and has been teaching, reviving and archiving sets for numerous years and has also compiled four books, Toss the Feathers, The flowing Tide, Tabhar dom do Lamh and Apples in Winter. Pat also has composed three set dances. The Metal Bridge Lancers, The Carrowbeg and Lough Allen.
Dancers eager to learn new sets gathered early and Pat began the workshop by teaching The Kilkenny Quadrilles. Pat told us he got this set from the late Paddy Staunton and recorded it in 1990 in The Springhill Hotel in Kilkenny. The set was originally danced as a half set but it also works beautifully as a full set. Danced to two polkas and three jigs it has some beautiful moves and is most enjoyable to dance.
The second set we danced was Pat's last composition The Lough Allen. Pat composed this set in 2016 and launched it in January this year at The Connie Ryan set dance weekend in Nenagh. The set has five figures danced to Reel, Polka, Reel, Jig and Fling.
Immediately after lunch Pat resumed the class by teaching The Fermanagh Quadrilles with five figures danced to Reel, Jig, Reel, and finishes with two Jigs. This set was one of the last sets that Connie Ryan taught. Pat concluded the workshops by teaching The Skellig Rock Set composed by Muris O’ Brien from Portmagee in Co Kerry.
Saturday night the crowds gathered for the second ceili of the weekend. Rise the Dust Ceili band gave us superb music to keep our feet happy and Pat Murphy was our master of ceremonies.
Sunday afternoon the village of Holycross saw dancers gather from across the country to dance to the magical music of Neily O’Connor ceili band. The duties of Master of ceremonies were shared between Jim Doyle and this correspondent. Thanking everyone for their support Jim Doyle said that the festival has survived for nineteen years because of the support of the dancers and the hard work of a small but mighty committee. Neily O’Connor sang Amhrán na bhFiann and the huge gathering stood to attention.
We were spoiled all weekend with a selection of home baking for tea breaks and tankards of chilled water was freely available to keep us hydrated.
Another successful festival had drawn to a close. The committee are to be congratulated on a wonderful weekend of set dancing a true tribute to Connie Ryan the man who taught us all the value of our traditional set dancing.