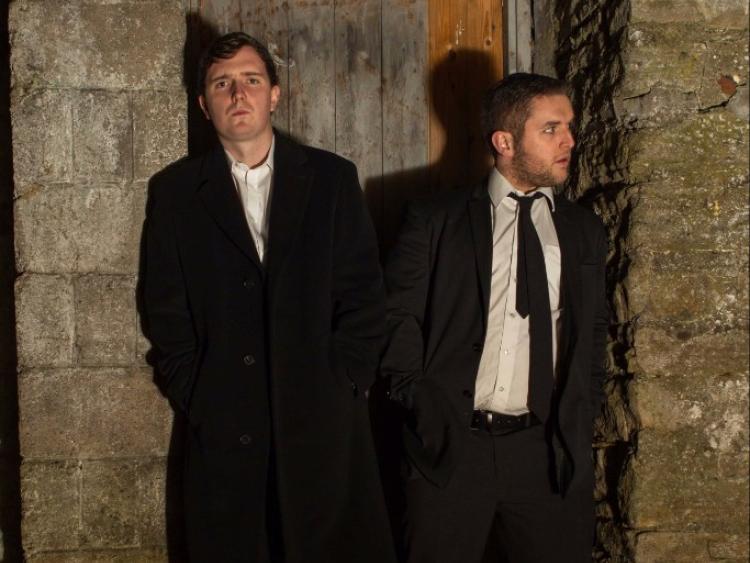 Following the success of their previous production of their new play ‘Striving’ at Clonmel Junction Festival 2017, Tipperary-based company Sound Out Theatre return to The Source Arts Centre on Saturday the 11th of October with their production of Harold Pinter’s two hander ‘The Dumb Waiter’.

Starring Steven Lafford and John Morris, and under the guidance of director Catherine McVicker, ‘The Dumb Waiter’ follows the story of two gangsters Ben and Gus, as they wait for an assignment in a basement. The mood in the claustrophobic room veers between a dull silence and then animation as both men discuss their work and items in the newspaper.

Interrupted only by food orders coming through a hatch in the wall – the ‘dumb waiter’ of the title, they await the message from their Boss. Showcasing Pinter’s trademark themes of underlying menace, class distinction and ideas of domination and submission, Tipperary’s Sound Out Theatre perform what is regarded as the best of Harold Pinter’s early plays.

Steven Lafford, who plays Ben the most senior of the hit men, describes The Dumb Waiter as “a fascinating piece of work once you get beneath the surface of it all. Sometimes the real drama occurs when nothing is said at all, which can be a daunting thought for any performer. We’ve spent a lot of time in the rehearsal room getting to the root of those silences, understanding what is really happening when two characters are simply just ‘waiting’..”

Director Catherine McVicker explains that while ‘The Dumb Waiter’ was first produced almost 60 years ago, its relevance today is far from lost. “I think it is indeed fair to say Pinter's influence, not only on theatre but also on more modern films (Pulp Fiction, Reservoir Dogs, A Clockwork Orange etc..) is immensely vast and progressive,” she says.

The Dumb Waiter is showing at The Source Arts Centre in Thurles on Saturday, November 11th at 8pm. Ticket are €12 and are available now from the box office.