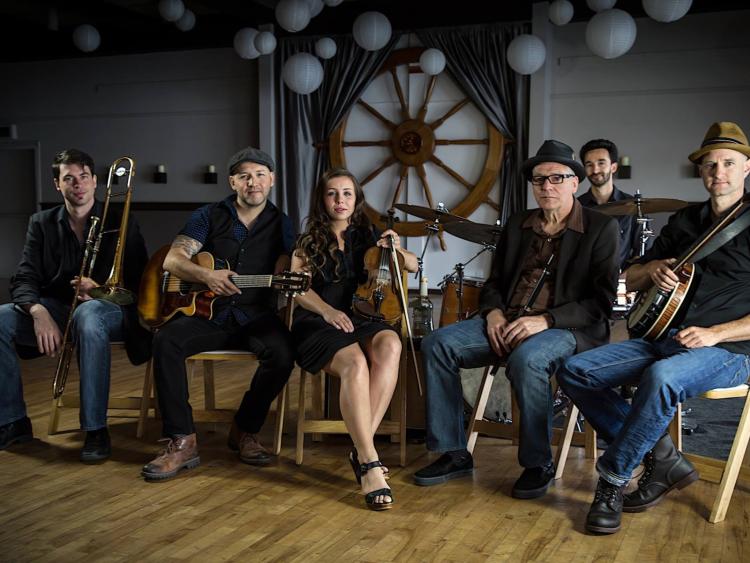 The Paperboys were formed by Mexican born Tom Landa in the mid 1990’s in Vancouver. Tom had a vision of forming a band that fused Folk, Celtic and Bluegrass music with Pop and Rock. He was armed with a dozen of self penned tunes and a lot of drive and ambition. After finding a group of musicians who shared common musical interests, they recorded their first CD and set to tour across Canada in a used van they bought for $500. What has happened since is seven albums, countless tours of North America and Europe, TV and Movie appearances, Movie Scores, Industry Accolades, Rave Reviews by Press & Media, and several Music awards including Canada’s version of The Grammy’s, The JUNO Award.

The Paperboys music defies classification. It is Mexican Son Jarocho mixed in with Irish Jigs and Reels and a good dose of Country and Bluegrass. It has healthy servings of Ska and African Highlife. It also has strains of Soul, Pop and Funk. It is mostly Acoustic although they also like Electric guitars. It is definitely FOLK music, and it has a deep respect and appreciation for tradition (Bluegrass, Old Time, Celtic) but it’s by no means Traditional. It is World Roots Music. It’s POP music. It is GOOD music. It has a tendency to connect people and means a lot to many folks the world over, It is one of the best multi-cultural, multi-ethnic, multi-generational, multi-lingual, multi-instrumental, genre bending band you will hear today!!

The sound of the band has evolved a lot since the early days, and these days it includes a horn section and digs deep into Tom’s Mexican heritage by adding Son Jarocho and Afro-Mexican grooves to the mix. The band’s true uniqueness is and has always been the live shows. It is here where the only opinion that matters is that of the fans that have been supporting since it’s inception. For the past 25 years, The Paperboys have been selling out venues throughout the globe, without the aid of major labels or commercial radio play. It is word of mouth and independent print and radio that have fuelled the success of this band. This has made it possible for Tom and co to take musical chances and expand their musical horizons. Although there are many common threads and themes on their albums, not one of their eight CD’s sound the same. It is a sign of a band with a musical curiosity who won’t rest on past success or a formula.

Doors for the gig will open at 8pm, and The Paperboys will take to the stage at 9pm prompt. Tickets for this great gig are on sale now, and are available in Marians Bookshop. O’Connell St.  Clonmel , from South Tipperary Arts Centre, Nelson Street Clonmel, or from Gerry Lawless on 086 3389619.