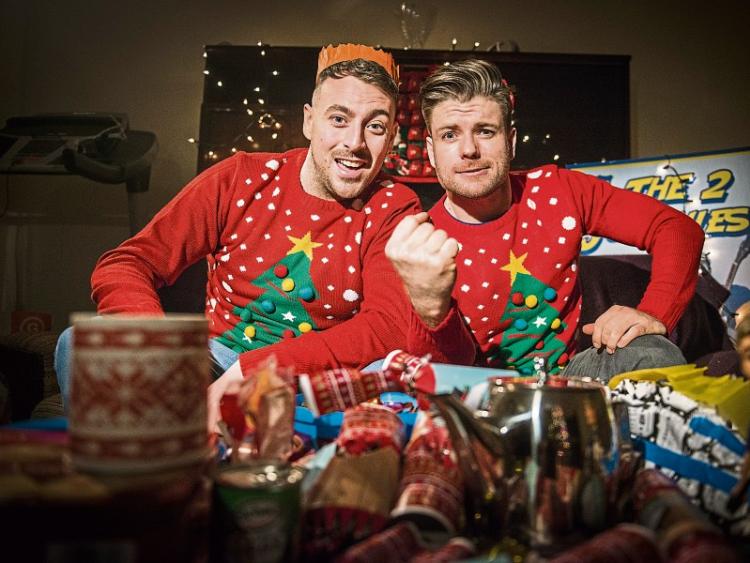 Christmas fun and antics in the new single from the 2 Johnnies.

The 2 Johnnies are thrilled to announce the release of their latest single, ‘Hometown Christmas’, available for 99c on iTunes and Spotify from Thursday, 14th December.

Back with a boom, the Tipperary natives are delighted to say that all proceeds of the Christmas-themed track will be going to Temple Street Children’s Hospital.

Fun, festive, and all for a good cause; ‘Hometown Christmas’ pays tribute to the typical Irish Christmas of overindulging on Roses, enthralled in Glenroe after attending ‘midnight’ mass at 9pm.

With the Late Late Toy Show and the three wise men thrown in for good measure, The 2 Johnnies have hilariously captured the essence of an Irish Christmas.

The music video sees some of Tipperary’s local stars take centre stage as they try their hand at acting, directing and performing. The 2 Johnnies also recreate some typical Irish Christmas antics that everyone will be familiar with.

Speaking on the single release, one half of the duo, Johnny B said: “We’re really thrilled to be releasing ‘Hometown Christmas’ today and we feel very proud to be working with Temple Street Children’s Hospital in ensuring that all proceeds of the single go towards helping the patients and staff.

“Christmas is a time for giving, so we thought it was especially fitting to team up with such an important and fantastic organisation that works hard to help those in need.”

Johnny Smacks added: “Everyone in Ireland appreciates the distinct qualities of the classic Irish Christmas and we hope that everyone can relate to something that they hear in this song. It’s lighthearted fun meant for all the family and it’s all in the name of Temple Street Children’s Hospital, which is even better!”

Following on from the immense success of their previous single, ‘The Boom is Back’, which has garnered over 450,000 combined views and went straight to number one on the Irish iTunes Chart, The 2 Johnnies have steadily grown over the course of the last year to cement their position on the Irish entertainment scene.